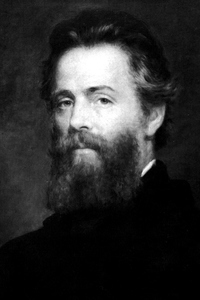 Herman Melville was an American novelist, short story writer, essayist and poet who is often classified as part of dark romanticism. He is best known for his novel Moby-Dick and novella Billy Budd, the latter which was published posthumously. His first three books gained much attention, the first becoming a bestseller, but after a fast-blooming literary success in the late 1840s, his popularity declined precipitously in the mid-1850s and never recovered during his lifetime. When he died in 1891, he was almost completely forgotten. It was not until the “Melville Revival” in the early 20th century that his work won recognition, most notably Moby-Dick which was hailed as one of the chief literary masterpieces of both American and world literature. (source: Wikipedia)

Bartleby the Scrivener is the story of a quiet, hard working legal copyist who works in an office in the Wall Street area of New York City. One day Bart...read more »

On a previous voyage, a mysterious white whale had ripped off the leg of a sea captain named Ahab. Now the crew of the Pequod, on a pursuit that feature...read more »

Named after the Polynesian term for a rover, or someone who roams from island to island, Omoo chronicles the tumultuous events aboard a South Sea whalin...read more »

With profound moral and philosophical ideals, Melville has presented a novel that touches the heart and mind. the idiosyncratic characters are etched in...read more »

Wellington Redburn is a fifteen-year-old from the state of New York, with only one dream - to run away to sea. However, when he does fulfil this long-he...read more »

Long considered Melville’s strangest novel, The Confidence-Man is a comic allegory aimed at the optimism and materialism of mid-nineteenth century Ameri...read more »

The Piazza Tales were written upon the public indignation over his novel Pierre, which had forced Melville to retire to the piazza of his house in Lenox...read more »

Typee was Herman Melville’s first novel. Originally published in 1846, it was partially based on Melville’s own experiences as a beachcomber in the Sout...read more »

One of Melville’s most popular novels, White-Jacket is both a brisk sea adventure and a powerful social critique, which also contains some of Melville’s...read more »