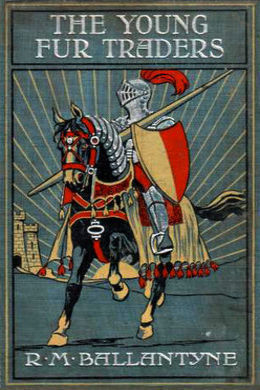 A Tale of the Far North

Follows the adventures of a young man called Charles Kennedy. Loosely autobiographical account of Ballantyne’s own time with the Hudson’s Bay Company in Canada. Its success prompted a series of excellent stories of adventure for the young with which this prolific Scottish author’s name is popularly associated. In the very center of the great continent of North America, far removed from the abodes of civilized men, and about twenty miles to the south of Lake Winnipeg, exists a colony composed of Indians, Scotsmen, and French-Canadians, which is known by the name of Red River Settlement. Although far removed from the civilized world, and containing within its precincts much that is savage and very little that is refined, Red River is quite a populous paradise, as compared with the desolate, solitary establishments of the Hudson’s Bay Fur Company.

Snowflakes and sunbeams, heat and cold, winter and summer, alternated with their wonted regularity for fifteen years in the wild regions of the Far North. During this space of time the hero of our tale sprouted from babyhood to boyhood, passed through the usual amount of accidents, ailments, and vicissitudes incidental to those periods of life, and finally entered upon that ambiguous condition that precedes early manhood.

It was a clear, cold winter’s day. The sunbeams of summer were long past, and snowflakes had fallen thickly on the banks of Red River. Charley sat on a lump of blue ice, his head drooping and his eyes bent on the snow at his feet with an expression of deep disconsolation.

Kate reclined at Charley’s side, looking wistfully up in his expressive face, as if to read the thoughts that were chasing each other through his mind, like the ever–varying clouds that floated in the winter sky above. It was quite evident to the most careless observer that, whatever might be the usual temperaments of the boy and girl, their present state of mind was not joyous, but on the contrary, very sad.

“It won’t do, sister Kate,” said Charley. “I’ve tried him over and over again—I’ve implored, begged, and entreated him to let me go; but he won’t, and I’m determined to run away, so there’s an end of it!”

As Charley gave utterance to this unalterable resolution, he rose from the bit of blue ice, and taking Kate by the hand, led her over the frozen river, climbed up the bank on the opposite side—an operation of some difficulty, owing to the snow, which had been drifted so deeply during a late storm that the usual track was almost obliterated—and turning into a path that lost itself among the willows, they speedily disappeared.

As it is possible our reader may desire to know who Charley and Kate are, and the part of the world in which they dwell, we will interrupt the thread of our narrative to explain.

In the very centre of the great continent of North America, far removed from the abodes of civilised men, and about twenty miles to the south of Lake Winnipeg, exists a colony composed of Indians, Scotsmen, and French–Canadians, which is known by the name of Red River Settlement. Red River differs from most colonies in more respects than one—the chief differences being, that whereas other colonies cluster on the sea–coast, this one lies many hundreds of miles in the interior of the country, and is surrounded by a wilderness; and while other colonies, acting on the Golden Rule, export their produce in return for goods imported, this of Red River imports a large quantity, and exports nothing, or next to nothing. Not but that it might export, if it only had an outlet or a market; but being eight hundred miles removed from the sea, and five hundred miles from the nearest market, with a series of rivers, lakes, rapids, and cataracts separating from the one, and a wide sweep of treeless prairie dividing from the other, the settlers have long since come to the conclusion that they were born to consume their own produce, and so regulate the extent of their farming operations by the strength of their appetites. Of course, there are many of the necessaries, or at least the luxuries, of life which the colonists cannot grow—such as tea, coffee, sugar, coats, trousers, and shirts—and which, consequently, they procure from England, by means of the Hudson’s Bay Fur Company’s ships, which sail once a year from Gravesend, laden with supplies for the trade carried on with the Indians. And the bales containing these articles are conveyed in boats up the rivers, carried past the waterfalls and rapids overland on the shoulders of stalwart voyageurs, and finally landed at Red River, after a rough trip of many weeks’ duration. The colony was founded in 1811, by the Earl of Selkirk, previously to which it had been a trading–post of the Fur Company. At the time of which we write, it contained about five thousand souls, and extended upwards of fifty miles along the Red and Assiniboine rivers, which streams supplied the settlers with a variety of excellent fish. The banks were clothed with fine trees; and immediately behind the settlement lay the great prairies, which extended in undulating waves—almost entirely devoid of shrub or tree—to the base of the Rocky Mountains.

Although far removed from the civilised world, and containing within its precincts much that is savage and very little that is refined, Red River is quite a populous paradise, as compared with the desolate, solitary establishments of the Hudson’s Bay Fur Company. These lonely dwellings of the trader are scattered far and wide over the whole continent—north, south, east, and west. Their population generally amounts to eight or ten men—seldom to thirty”