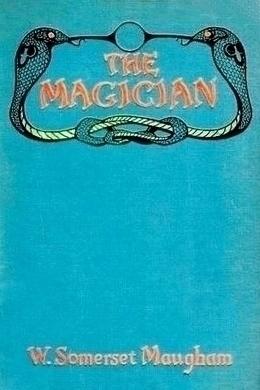 The Magician is one of Somerset Maughams most complex and perceptive novels. Running through it is the theme of evil, deftly woven into a story as memorable for its action as for its astonishingly vivid characters. In fin de siècle Paris, Arthur and Margaret are engaged to be married. Everyone approves and everyone seems to be enjoying themselvesuntil the sinister and repulsive Oliver Haddo appears.

Arthur Burdon and Dr Porhoet walked in silence. They had lunched at a restaurant in the Boulevard Saint Michel, and were sauntering now in the gardens of the Luxembourg. Dr Porhoet walked with stooping shoulders, his hands behind him. He beheld the scene with the eyes of the many painters who have sought by means of the most charming garden in Paris to express their sense of beauty. The grass was scattered with the fallen leaves, but their wan decay little served to give a touch of nature to the artifice of all besides. The trees were neatly surrounded by bushes, and the bushes by trim beds of flowers. But the trees grew without abandonment, as though conscious of the decorative scheme they helped to form. It was autumn, and some were leafless already. Many of the flowers were withered. The formal garden reminded one of a light woman, no longer young, who sought, with faded finery, with powder and paint, to make a brave show of despair. It had those false, difficult smiles of uneasy gaiety, and the pitiful graces which attempt a fascination that the hurrying years have rendered vain.

Dr Porhoet drew more closely round his fragile body the heavy cloak which even in summer he could not persuade himself to discard. The best part of his life had been spent in Egypt, in the practice of medicine, and the frigid summers of Europe scarcely warmed his blood. His memory flashed for an instant upon those multi-coloured streets of Alexandria; and then, like a homing bird, it flew to the green woods and the storm-beaten coasts of his native Brittany. His brown eyes were veiled with sudden melancholy.

‘Let us wait here for a moment,’ he said.

They took two straw-bottomed chairs and sat near the octagonal water which completes with its fountain of Cupids the enchanting artificiality of the Luxembourg. The sun shone more kindly now, and the trees which framed the scene were golden and lovely. A balustrade of stone gracefully enclosed the space, and the flowers, freshly bedded, were very gay. In one corner they could see the squat, quaint towers of Saint Sulpice, and on the other side the uneven roofs of the Boulevard Saint Michel.

The palace was grey and solid. Nurses, some in the white caps of their native province, others with the satin streamers of the nounou, marched sedately two by two, wheeling perambulators and talking. Brightly dressed children trundled hoops or whipped a stubborn top. As he watched them, Dr Porhoet’s lips broke into a smile, and it was so tender that his thin face, sallow from long exposure to subtropical suns, was transfigured. He no longer struck you merely as an insignificant little man with hollow cheeks and a thin grey beard; for the weariness of expression which was habitual to him vanished before the charming sympathy of his smile. His sunken eyes glittered with a kindly but ironic good-humour. Now passed a guard in the romantic cloak of a brigand in comic opera and a peaked cap like that of an alguacil. A group of telegraph boys in blue stood round a painter, who was making a sketch–notwithstanding half-frozen fingers. Here and there, in baggy corduroys, tight jackets, and wide-brimmed hats, strolled students who might have stepped from the page of Murger’s immortal romance. But the students now are uneasy with the fear of ridicule, and more often they walk in bowler hats and the neat coats of the boulevardier.

Dr Porhoet spoke English fluently, with scarcely a trace of foreign accent, but with an elaboration which suggested that he had learned the language as much from study of the English classics as from conversation.

‘And how is Miss Dauncey?’ he asked, turning to his friend.

‘Oh, I expect she’s all right. I’ve not seen her today, but I’m going to tea at the studio this afternoon, and we want you to dine with us at the Chien Noir.’

‘I shall be much pleased. But do you not wish to be by yourselves?’

‘She met me at the station yesterday, and we dined together. We talked steadily from half past six till midnight.’

‘Or, rather, she talked and you listened with the delighted attention of a happy lover.’

Arthur Burdon had just arrived in Paris. He was a surgeon on the staff of St Luke’s, and had come ostensibly to study the methods of the French operators; but his real object was certainly to see Margaret Dauncey. He was furnished with introductions from London surgeons of repute, and had already spent a morning at the Hotel Dieu, where the operator, warned that his visitor was a bold and skilful surgeon, whose reputation in England was already considerable, had sought to dazzle him by feats that savoured almost of legerdemain. Though the hint of charlatanry in the Frenchman’s methods had not escaped Arthur Burdon’s shrewd eyes, the audacious sureness of his hand had excited his enthusiasm.