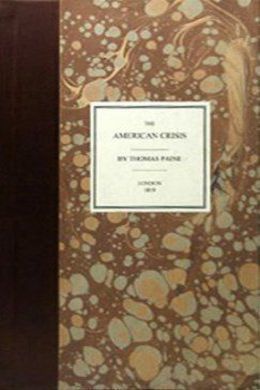 “The American Crisis was a series of pamphlets published in London from 1776-1783 during the American Revolution by revolutionary author Thomas Paine. It decried British actions and Loyalists, offering support to the Patriot cause. The first of these four pamphlets was published on December 23, 1776; the second on January 13, 1777; the third on April 19, 1777; and, the fourth and final on September 12, 1777.The first of the pamphlets was released during a time when the Revolution still looked an unsteady prospect. Its opening sentence was adopted as the watchword of the movement to Trenton. The famous opening lines are: These are the times that try men’s souls: The summer soldier and the sunshine patriot will, in this crisis, shrink from the service of his country; but he that stands it now, deserves the love and thanks of man and woman.

THESE are the times that try men’s souls. The summer soldier and the sunshine patriot will, in this crisis, shrink from the service of their country; but he that stands it now, deserves the love and thanks of man and woman. Tyranny, like hell, is not easily conquered; yet we have this consolation with us, that the harder the conflict, the more glorious the triumph. What we obtain too cheap, we esteem too lightly: it is dearness only that gives every thing its value. Heaven knows how to put a proper price upon its goods; and it would be strange indeed if so celestial an article as FREEDOM should not be highly rated. Britain, with an army to enforce her tyranny, has declared that she has a right (not only to TAX) but “to BIND us in ALL CASES WHATSOEVER,” and if being bound in that manner, is not slavery, then is there not such a thing as slavery upon earth. Even the expression is impious; for so unlimited a power can belong only to God.

Whether the independence of the continent was declared too soon, or delayed too long, I will not now enter into as an argument; my own simple opinion is, that had it been eight months earlier, it would have been much better. We did not make a proper use of last winter, neither could we, while we were in a dependent state. However, the fault, if it were one, was all our own

The present winter is worth an age, if rightly employed; but, if lost or neglected, the whole continent will partake of the evil; and there is no punishment that man does not deserve, be he who, or what, or where he will, that may be the means of sacrificing a season so precious and useful. ; we have none to blame but ourselves. But no great deal is lost yet. All that Howe has been doing for this month past, is rather a ravage than a conquest, which the spirit of the Jerseys, a year ago, would have quickly repulsed, and which time and a little resolution will soon recover.

I have as little superstition in me as any man living, but my secret opinion has ever been, and still is, that God Almighty will not give up a people to military destruction, or leave them unsupportedly to perish, who have so earnestly and so repeatedly sought to avoid the calamities of war, by every decent method which wisdom could invent. Neither have I so much of the infidel in me, as to suppose that He has relinquished the government of the world, and given us up to the care of devils; and as I do not, I cannot see on what grounds the king of Britain can look up to heaven for help against us: a common murderer, a highwayman, or a house–breaker, has as good a pretence as he.