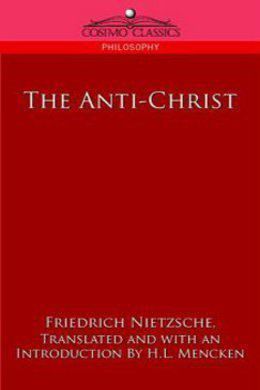 This work is both an unrestrained attack on Christianity and a further exposition of Nietzsche’s will-to-power philosophy so dramatically presented in Zarathustra. Christianity, says Nietzsche, represents ‘everything weak, low, and botched; it has made an ideal out of antagonism towards all the self-preservative instincts of strong life.’ By contrast, Nietzsche defines good as: ‘All that enhances the feeling of power, the Will to Power, and power itself in man. What is bad?–All that proceeds from weakness. What is happiness?–The feeling that power is increasing,–that resistance has been overcome.’ In attempting to redefine the basis of Western values by demolishing what Nietzsche saw as the crippling influence of the Judeo-Christian tradition, The Antichrist has proved to be highly controversial and continuously stimulating to later generations of philosophers.

Let us look each other in the face. We are Hyperboreans–we know well enough how remote our place is. “Neither by land nor by water will you find the road to the Hyperboreans”: even Pindar, in his day, knew that much about us. Beyond the North, beyond the ice, beyond death–our life, our happiness…. We have discovered that happiness; we know the way; we got our knowledge of it from thousands of years in the labyrinth. Who else has found it?–The man of today?–“I don’t know either the way out or the way in; I am whatever doesn’t know either the way out or the way in”–so sighs the man of today…. This is the sort of modernity that made us ill,–we sickened on lazy peace, cowardly compromise, the whole virtuous dirtiness of the modern Yea and Nay. This tolerance and largeur of the heart that “forgives” everything because it “understands” everything is a sirocco to us. Rather live amid the ice than among modern virtues and other such south-winds!… We were brave enough; we spared neither ourselves nor others; but we were a long time finding out where to direct our courage. We grew dismal; they called us fatalists. Our fate–it was the fulness, the tension, the storing up of powers. We thirsted for the lightnings and great deeds; we kept as far as possible from the happiness of the weakling, from “resignation”… There was thunder in our air; nature, as we embodied it, became overcast–for we had not yet found the way. The formula of our happiness: a Yea, a Nay, a straight line, a goal….

What is good?–Whatever augments the feeling of power, the will to power, power itself, in man.

What is evil?–Whatever springs from weakness.

What is happiness?–The feeling that power increases–that resistance is overcome.

Not contentment, but more power; not peace at any price, but war; not virtue, but efficiency (virtue in the Renaissance sense, virtu, virtue free of moral acid).

The weak and the botched shall perish: first principle of our charity. And one should help them to it.

What is more harmful than any vice?–Practical sympathy for the botched and the weak–Christianity….

The problem that I set here is not what shall replace mankind in the order of living creatures (–man is an end–): but what type of man must be bred, must be willed, as being the most valuable, the most worthy of life, the most secure guarantee of the future.

This more valuable type has appeared often enough in the past: but always as a happy accident, as an exception, never as deliberately willed. Very often it has been precisely the most feared; hitherto it has been almost the terror of terrors;–and out of that terror the contrary type has been willed, cultivated and attained: the domestic animal, the herd animal, the sick brute-man–the Christian….

Mankind surely does not represent an evolution toward a better or stronger or higher level, as progress is now understood. This “progress” is merely a modern idea, which is to say, a false idea. The European of today, in his essential worth, falls far below the European of the Renaissance; the process of evolution does not necessarily mean elevation, enhancement, strengthening.

True enough, it succeeds in isolated and individual cases in various parts of the earth and under the most widely different cultures, and in these cases a higher type certainly manifests itself; something which, compared to mankind in the mass, appears as a sort of superman. Such happy strokes of high success have always been possible, and will remain possible, perhaps, for all time to come. Even whole races, tribes and nations may occasionally represent such lucky accidents.

We should not deck out and embellish Christianity: it has waged a war to the death against this higher type of man, it has put all the deepest instincts of this type under its ban, it has developed its concept of evil, of the Evil One himself, out of these instincts–the strong man as the typical reprobate, the “outcast among men.” Christianity has taken the part of all the weak, the low, the botched; it has made an ideal out of antagonism to all the self-preservative instincts of sound life; it has corrupted even the faculties of those natures that are intellectually most vigorous, by representing the highest intellectual values as sinful, as misleading, as full of temptation. The most lamentable example: the corruption of Pascal, who believed that his intellect had been destroyed by original sin, whereas it was actually destroyed by Christianity!