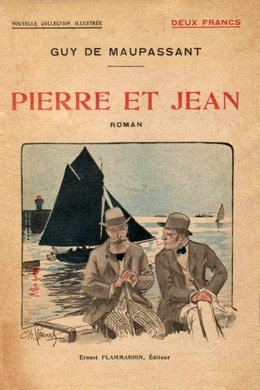 Henry James’s admiration for “this masterly little novel” has been echoed throughout the twentieth century by readers of Pierre et Jean. It marked a turning point in the development of French fiction, situated as it is between traditional social realism and the psychological novel. It isrecognized as a classic study of filial jealousy, triggered by one of the two brothers of its title finding himself the sole inheritor of the fortune of his mother’s former lover. Pierre et Jean is set in Le Havre in the 1880s and is notable for its evocation of the Normandy coastline captured by the Impressionists. But Maupassant’s greatest achievement is to have woven from this simple plot in a maritime context a brilliantly crafted exploration of the complexities at theheart of family life.

“Tschah!” exclaimed old Roland suddenly, after he had remained motionless for a quarter of an hour, his eyes fixed on the water, while now and again he very slightly lifted his line sunk in the sea.

Mme. Roland, dozing in the stern by the side of Mme. Rosemilly, who had been invited to join the fishing-party, woke up, and turning her head to look at her husband, said:

And the old fellow replied in a fury:

“They do not bite at all. I have taken nothing since noon. Only men should ever go fishing. Women always delay the start till it is too late.”

His two sons, Pierre and Jean, who each held a line twisted round his forefinger, one to port and one to starboard, both began to laugh, and Jean remarked:

“You are not very polite to our guest, father.”

M. Roland was abashed, and apologized.

“I beg your pardon, Mme. Rosemilly, but that is just like me. I invite ladies because I like to be with them, and then, as soon as I feel the water beneath me, I think of nothing but the fish.”

Mme. Roland was now quite awake, and gazing with a softened look at the wide horizon of cliff and sea.

“You have had good sport, all the same,” she murmured.

But her husband shook his head in denial, though at the same time he glanced complacently at the basket where the fish caught by the three men were still breathing spasmodically, with a low rustle of clammy scales and struggling fins, and dull, ineffectual efforts, gasping in the fatal air. Old Roland took the basket between his knees and tilted it up, making the silver heap of creatures slide to the edge that he might see those lying at the bottom, and their death-throes became more convulsive, while the strong smell of their bodies, a wholesome reek of brine, came up from the full depths of the creel. The old fisherman sniffed it eagerly, as we smell at roses, and exclaimed:

“Cristi! But they are fresh enough!” and he went on: “How many did you pull out, doctor?”

His eldest son, Pierre, a man of thirty, with black whiskers trimmed square like a lawyer’s, his mustache and beard shaved away, replied:

The father turned to the younger. “And you, Jean?” said he.

Jean, a tall fellow, much younger than his brother, fair, with a full beard, smiled and murmured:

“Much the same as Pierre–four or five.”

Every time they told the same fib, which delighted father Roland. He had hitched his line round a row-lock, and folding his arms he announced:

“I will never again try to fish after noon. After ten in the morning it is all over. The lazy brutes will not bite; they are taking their siesta in the sun.” And he looked round at the sea on all sides, with the satisfied air of a proprietor.

He was a retired jeweller who had been led by an inordinate love of seafaring and fishing to fly from the shop as soon as he had made enough money to live in modest comfort on the interest of his savings. He retired to le Havre, bought a boat, and became an amateur skipper. His two sons, Pierre and Jean, had remained at Paris to continue their studies, and came for the holidays from time to time to share their father’s amusements.

On leaving school, Pierre, the elder, five years older than Jean, had felt a vocation to various professions and had tried half a dozen in succession, but, soon disgusted with each in turn, he started afresh with new hopes. Medicine had been his last fancy, and he had set to work with so much ardour that he had just qualified after an unusually short course of study, by a special remission of time from the minister. He was enthusiastic, intelligent, fickle, but obstinate, full of Utopias and philosophical notions.

Jean, who was as fair as his brother was dark, as deliberate as his brother was vehement, as gentle as his brother was unforgiving, had quietly gone through his studies for the law and had just taken his diploma as a licentiate, at the time when Pierre had taken his in medicine. So they were now having a little rest at home, and both looked forward to settling in Havre if they could find a satisfactory opening.

But a vague jealousy, one of those dormant jealousies which grow up between brothers or sisters and slowly ripen till they burst, on the occasion of a marriage perhaps, or of some good fortune happening to one of them, kept them on the alert in a sort of brotherly and non-aggressive animosity. They were fond of each other, it is true, but they watched each other. Pierre, five years old when Jean was born, had looked with the eyes of a little petted animal at that other little animal which had suddenly come to lie in his father’s and mother’s arms and to be loved and fondled by them.