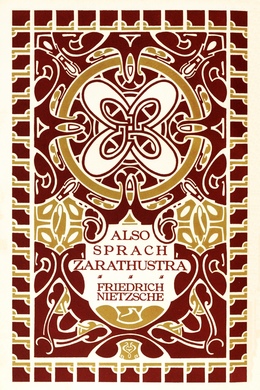 A Book for All and None

Nietzsche’s most controversial, and probably his most important work. The concepts that “God is Dead” and “Eternal Recurrence” with their attendant ramifications are major features of this work. Highly original and inventive, part literature, part philosophy, it parodies both, in its stylistic resemblance to the New Testament and Pre-Socratic Greek writings. Through a fictionalized version the character Zarathustra, the legendary founder of Zoroasterianism, Nietzsche propounds a new and different version of moral philosophy. During the course of the story presented in this loosely structured narrative, Nietzsche develops and presents a contrary view of mankind: as lying somewhere between the apes and the ultimate Superman, or Ubermensch. Ranging from unsupported assumptions to rigorous argument - from exposition to dialog to poetry - Thus Spake Zarathustra is a surprising, engaging and thought provoking look at the condition of mankind. Nietzsche himself considered this to be his most important work. His tragic end, in a state of complete mental breakdown, precluded any possibility that it would be superseded and raised a question of the association between madness and genius.

When Zarathustra was thirty years old, he left his home and the lake of his home, and went into the mountains. There he enjoyed his spirit and solitude, and for ten years did not weary of it. But at last his heart changed,–and rising one morning with the rosy dawn, he went before the sun, and spake thus unto it:

Thou great star! What would be thy happiness if thou hadst not those for whom thou shinest!

For ten years hast thou climbed hither unto my cave: thou wouldst have wearied of thy light and of the journey, had it not been for me, mine eagle, and my serpent.

But we awaited thee every morning, took from thee thine overflow and blessed thee for it.

Lo! I am weary of my wisdom, like the bee that hath gathered too much honey; I need hands outstretched to take it.

I would fain bestow and distribute, until the wise have once more become joyous in their folly, and the poor happy in their riches.

Therefore must I descend into the deep: as thou doest in the evening, when thou goest behind the sea, and givest light also to the nether-world, thou exuberant star!

Like thee must I GO DOWN, as men say, to whom I shall descend.

Bless me, then, thou tranquil eye, that canst behold even the greatest happiness without envy!

Bless the cup that is about to overflow, that the water may flow golden out of it, and carry everywhere the reflection of thy bliss!

Zarathustra went down the mountain alone, no one meeting him. When he entered the forest, however, there suddenly stood before him an old man, who had left his holy cot to seek roots. And thus spake the old man to Zarathustra:

“No stranger to me is this wanderer: many years ago passed he by. Zarathustra he was called; but he hath altered.

Then thou carriedst thine ashes into the mountains: wilt thou now carry thy fire into the valleys? Fearest thou not the incendiary’s doom?

Yea, I recognise Zarathustra. Pure is his eye, and no loathing lurketh about his mouth. Goeth he not along like a dancer?

“Why,” said the saint, “did I go into the forest and the desert? Was it not because I loved men far too well?

Now I love God: men, I do not love. Man is a thing too imperfect for me. Love to man would be fatal to me.”

Zarathustra answered: “What spake I of love! I am bringing gifts unto men.”

If, however, thou wilt give unto them, give them no more than an alms, and let them also beg for it!”

“No,” replied Zarathustra, “I give no alms. I am not poor enough for that.”

The saint laughed at Zarathustra, and spake thus: “Then see to it that they accept thy treasures! They are distrustful of anchorites, and do not believe that we come with gifts.

The fall of our footsteps ringeth too hollow through their streets. And just as at night, when they are in bed and hear a man abroad long before sunrise, so they ask themselves concerning us: Where goeth the thief?

Go not to men, but stay in the forest! Go rather to the animals! Why not be like me–a bear amongst bears, a bird amongst birds?”

“And what doeth the saint in the forest?” asked Zarathustra.

The saint answered: “I make hymns and sing them; and in making hymns I laugh and weep and mumble: thus do I praise God.

With singing, weeping, laughing, and mumbling do I praise the God who is my God. But what dost thou bring us as a gift?”

When Zarathustra had heard these words, he bowed to the saint and said: “What should I have to give thee! Let me rather hurry hence lest I take aught away from thee!”–And thus they parted from one another, the old man and Zarathustra, laughing like schoolboys.

When Zarathustra was alone, however, he said to his heart: “Could it be possible! This old saint in the forest hath not yet heard of it, that GOD IS DEAD!”