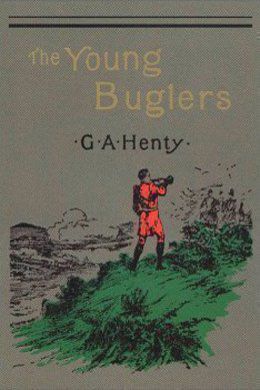 A Tale of the Peninsular War

The Young Buglers, A Tale of the Peninsular War is a book by British author G.A. Henty. It was published by Blackie and Son Ltd, London. It tells of the Peninsula War through the eyes of two orphaned brothers, Tom and Peter Scudamore. (source: Wikipedia)

Had any of the boys in the lower forms of Eton in the year 1808, been asked who were the most popular boys of their own age, they would have been almost sure to have answered, without the slightest hesitation, Tom and Peter Scudamore, and yet it is probable that no two boys were more often in disgrace. It was not that they were idle, upon the contrary, both were fairly up in their respective forms, but they were constantly getting into mischief of one sort or another; yet even with the masters they were favorites, there was never anything low, disgraceful, or ungentlemanly in their escapades, and they could be trusted never to attempt to screen themselves from the consequences by prevarication, much less by lying. If the masters heard that a party of youngsters had been seen far out of bounds, they were pretty sure that the Scudamores were among them; a farmer came in from a distance to complain that his favorite tree had been stripped of its apples–for in those days apples were looked upon by boys as fair objects of sport,–if the head-master’s favorite white poodle appeared dyed a deep blue, if Mr. Jones, the most unpopular master in the school, upon coming out of his door trod upon a quantity of tallow smeared all over the doorstep, and was laid up for a week in consequence, there was generally a strong suspicion that Tom and Peter Scudamore were concerned in the matter. One of their tricks actually came to the ears of the Provost himself, and caused quite a sensation in the place, but in this case, fortunately for them, they escaped undetected.

One fine summer afternoon they were out on the water with two or three other boys of their own age, when a barge was seen ahead at some short distance from the shore. She was apparently floating down with the stream, and the fact that a horse was proceeding along the towing-path a little way ahead was not noticed, as the rope was slack and was trailing under water. The boys, therefore, as they were rowing against stream, steered their boat to pass inside of her. Just as they came abreast of the horse a man on the barge suddenly shouted to the rider of the horse to go on. He did so, the rope tightened, rose from the water just under the bow of the boat, and in another minute the boys were struggling in the water. All were good swimmers, and would have cared little for the ducking had it occurred accidentally, but the roars of laughter of the bargeman, and the chaff with which he assailed them as they scrambled up the bank, showed clearly enough that they had been upset maliciously. The boys were furious, and one or two proposed that they should report the case, but Tom Scudamore pointed out that the bargeman would of course declare that it was a pure accident, and that the boys were themselves in fault in not looking out whether the barge was being towed, before going inside her, and so nothing would come of reporting.

The boat was dragged ashore and emptied, and in a few minutes they were rowing back towards the town. The distance was but short, and they did not repass the barge before they reached their boat-house. The brothers had exchanged a few words in a low voice on the way, and instead of following the example of the others, and starting at a run for the house where they boarded to change their clothes, they walked down by the river and saw that the barge had moored up against the bank, at a short distance below the bridge. They watched for a time, and saw the bargeman fasten up the hatch of the little cabin and go ashore.

That night two boys lowered themselves with a rope from the window of one of the dames-houses, and walked rapidly down to the river. There were a few flickering oil lamps burning, and the one or two old watchmen were soundly asleep in their boxes. They did not meet a soul moving upon their way to the object of the expedition, the barge that had run them down. Very quietly they slipped on board, satisfied themselves by listening at the half-open hatch to the snoring within that their enemy was there, then loosened the moorings so that they could be thrown off at a moment’s notice.

“Now, Peter,” the elder brother said, “open our lantern. The night is quite still. You hold your hand behind it, so that the light will not fall on our faces, and I will look whether he is only wrapped up in a blanket or has a regular bed; we must not risk setting the place on fire. Get the crackers ready.”

A dark lantern was now taken out from under Tom’s jacket, and was found to be still alight, an important matter, for striking a light with flint and steel was in those days a long and tedious business, and then opening it Tom threw the light into the cabin. It was a tiny place, and upon a bench, wrapped up in a blanket, the bargeman was lying. As the light fell on his eyes, he moved, and a moment afterwards started up with an oath, and demanded who was there.