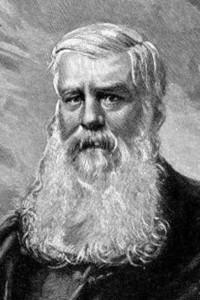 George Alfred Henty was a prolific English novelist and a special correspondent. He is best known for his historical adventure stories that were popular in the late 19th century. His works include The Dragon & The Raven (1886), For The Temple (1888), Under Drake’s Flag (1883) and In Freedom’s Cause (1885). His children’s novels typically revolved around a boy or young man living in troubled times. These ranged from the Punic War to more recent conflicts such as the Napoleonic Wars or the American Civil War. Henty’s heroes – which occasionally included young ladies – are uniformly intelligent, courageous, honest and resourceful with plenty of ‘pluck’ yet are also modest. These virtues have made Henty’s novels popular today among many Christians and homeschoolers.

An exciting adventure of outlaws in the early days of the Australian gold rush, when fortunes were made and stolen, and when bush rangers and natives co...read more »

The invasion of Britain by the Roman legionaries is the setting for this story. Beric, a boy-chief of a British tribe, takes a prominent part in the ins...read more »

This is a tale of young Englishmen who go out to the Argentine with their family. They have many adventures at the time of the Mexican - American War in...read more »

The sacred cat of Bubastes has accidentally been slain; now young Chebron must pay for the offence with his own life, as this is the law of the Pagans i...read more »

The Young Buglers, A Tale of the Peninsular War is a book by British author G.A. Henty. It was published by Blackie and Son Ltd, London. It tells of the...read more »

Henty has taken a period of Indian history of the most vital importance, and he has embroidered on the historical facts a story which of itself is deepl...read more »

From the creator of exciting, historically accurate fiction for young readers comes this tale of loyalty and courage in 11th-century Britain. Wulf and h...read more »