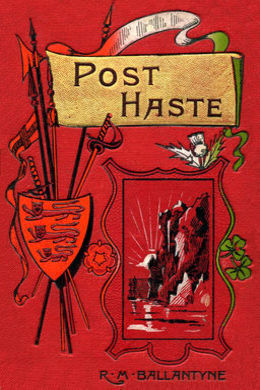 This tale is founded chiefly on facts furnished by the Postmaster-General’s Annual Reports, and gathered, during personal intercourse and investigation, at the General Post-Office of London and its Branches. It is intended to illustrate–not by any means to exhaust–the subject of postal work, communication, and incident throughout the Kingdom.

Once upon a time—only once, observe, she did not do it twice—a widow of the name of Maylands went, in a fit of moderate insanity, and took up her abode in a lonely, tumble–down cottage in the west of Ireland.

Mrs Maylands was very poor. She was the widow of an English clergyman, who had left her with a small family and the smallest income that was compatible with that family’s maintenance. Hence the migration to Ireland, where she had been born, and where she hoped to live economically.

The tumble–down cottage was near the sea, not far from a little bay named Howlin Cove. Though little it was a tremendous bay, with mighty cliffs landward, and jutting ledges on either side, and forbidding rocks at the entrance, which waged continual warfare with the great Atlantic billows that rolled into it. The whole place suggested shipwreck and smugglers.

The small family of Mrs Maylands consisted of three babes—so their mother styled them. The eldest babe, Mary—better known as May—was seventeen years of age, and dwelt in London, to which great city she had been tempted by an elderly English cousin, Miss Sarah Lillycrop, who held out as baits a possible situation and a hearty welcome.

The second babe, Philip, was verging on fifteen. Having kicked, crashed, and smashed his way though an uproarious infancy and a stormy childhood, he had become a sedate, earnest, energetic boy, with a slight dash of humour in his spirit, and more than a dash of determination.

The third babe was still a baby. As it plays little or no part in our tale we dismiss it with the remark that it was of the male sex, and was at once the hope, fear, joy and anxiety of its distracted mother. So, too, we may dismiss Miss Madge Stevens, a poor relation, who was worth her weight in gold to the widow, inasmuch as she acted the part of general servant, nurse, mender of the household garments, and recipient of joys and sorrows, all of which duties she fulfilled for love, and for just shelter and sustenance sufficient to keep her affectionate spirit within her rather thin but well–favoured body.

Phil Maylands was a hero–worshipper. At the time when our tale opens he worshipped a youth—the son of a retired naval officer,—who possessed at least some of the qualities that are occasionally found in a hero. George Aspel was daring, genial, enthusiastic, tall, broad–shouldered, active, and young—about twenty. But George had a tendency to dissipation.

His father, who had recently died, had been addicted to what he styled good–fellowship and grog. Knowing his so–called weakness, Captain Aspel had sent his boy to be brought up in the family of the Reverend James Maylands, but some time before the death of that gentleman he had called him home to help to manage the small farm with which he amused his declining years. George and his father amused themselves with it to such an extent that they became bankrupt about the time of the father’s death, and thus the son was left with the world before him and nothing whatever in his pocket except a tobacco–pipe and a corkscrew.

One day Phil met George Aspel taking a ramble and joined him. These two lived near to each other. Indeed, Mrs Maylands had been partly influenced in her choice of a residence by her desire to be near George.

It was a bitterly cold December afternoon. As the friends reached the summit of the grey cliffs, a squall, fresh from the Arctic regions, came sweeping over the angry sea, cutting the foam in flecks from the waves, and whistling, as if in baffled fury, among the opposing crags.

“Isn’t it a grand sight?” said Phil, as they sought shelter under the lee of a projecting rock.

“Glorious! I never look upon that sight,” said Aspel, with flashing eyes, “without wishing that I had lived in the days of the old Vikings.”

The youth traced his descent from the sea–kings of Norway—those tremendous fellows who were wont in days of yore to ravage the shores of the known and unknown world, east and west, north and south, leaving their indelible mark alike on the hot sands of Africa and the icebound rocks of Greenland. As Phil Maylands knew nothing of his own lineage further back than his grandfather, he was free to admire the immense antiquity of his friend’s genealogical tree. Phil was not, however, so completely under the fascination of his hero as to be utterly blind to his faults; but he loved him, and that sufficed to cover them up.

“Sure, they were a wild lot, after all?” he said in a questioning tone, as he looked up at the glowing countenance of his friend, who, with his bold mien, bulky frame, blue eyes, and fair curls, would have made a very creditable Viking indeed, had he lived in the tenth century.

“Of course they were, Phil,” he replied, looking down at his admirer with a smile. “Men could not well be otherwise than wild and warlike in those days; but it was not all ravage and plunder with them”