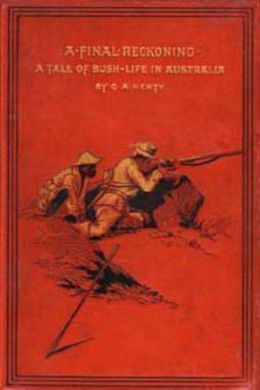 A Tale of Bush Life in Australia

An exciting adventure of outlaws in the early days of the Australian gold rush, when fortunes were made and stolen, and when bush rangers and natives constituted a real and formidable danger to the settlers. “All boys will read this story with eager and unflagging interest. The episodes are in Mr. Henty’s very best vein–graphic, exciting, realistic; and, as in all Mr. Henty’s books, the tendency is to the formation of an honourable, manly, and even heroic character.”–Birmingham Post.

“You are the most troublesome boy in the village, Reuben Whitney, and you will come to a bad end.”

The words followed a shower of cuts with the cane. The speaker was an elderly man, the master of the village school of Tipping, near Lewes, in Sussex; and the words were elicited, in no small degree, by the vexation of the speaker at his inability to wring a cry from the boy whom he was striking. He was a lad of some thirteen years of age, with a face naturally bright and intelligent; but at present quivering with anger.

“You ought to be ashamed of yourself,” the master said, “instead of speaking in that way. You, who learn easier than anyone here, and could always be at the top of your class, if you chose. I had hoped better things of you, Reuben; but it’s just the way, it’s your bright boys as mostly gets into mischief.”

At this moment the door of the school room opened, and a lady with two girls, one of about fourteen and the other eleven years of age, entered.

“What is the matter now?” the lady asked, seeing the schoolmaster, cane in hand, and the boy standing before him.

“Reuben Whitney! What, in trouble again, Reuben? I am afraid you are a very troublesome boy.”

“I am not troublesome, ma’m,” the boy said sturdily. “That is, I wouldn’t be if they would let me alone; but everything that is done bad, they put it down to me.”

“But what have you been doing now, Reuben?”

“I have done nothing at all, ma’m; but he’s always down on me,” and he pointed to the master, “and when they are always down on a fellow, it’s no use his trying to do right.”

“What has the boy been doing now, Mr. White?” the lady asked.

“Look there, ma’m, at those four windows all smashed, and the squire had all the broken panes mended only a fortnight ago.”

“By a big stone, ma’m, which caught the frame where they joined, and smashed them all.”

“Why do you suppose it was Reuben?” Mrs. Ellison asked the master.

“Because I had kept him in, half an hour after the others went home to dinner, for pinching young Jones and making him call out; and he had only just gone out of the gate when I heard the smash; so there is no doubt about it, for all the others must have been in at their dinner at that time.”

“I didn’t do it, ma’m,” the boy repeated. “Directly I got out of the gate, I started off to run home. I hadn’t gone not twenty yards when I heard a smash; but I wasn’t going for to stop to see what it was. It weren’t no business of mine, and that’s all I know about it.”

“Mamma,” the younger of the two girls said eagerly, “what he says is quite true. You know you let me run down the village with the jelly for Mrs. Thomson’s child, and as I was coming down the road I saw a boy come out of the gate of the school and run away; and then I heard a noise of broken glass, and I saw another boy jump over the hedge opposite, and run, too. He came my way and, directly he saw me, he ran to a gate and climbed over.”

“Do you know who it was, Kate?” Mrs. Ellison asked.

There was a general turning of the heads of the children to the point where a boy, somewhat bigger than the rest, had been apparently studying his lessons with great diligence.

The boy slouched up with a sullen face.

“You hear what my daughter says, Tom. What have you to say in reply?”

“I didn’t throw the stone at the window,” the boy replied. “I chucked it at a sparrow, and it weren’t my fault if it missed him and broke the window.”

“I should say it was your fault, Tom,” Mrs. Ellison said sharply–“very much your fault, if you throw a great stone at a bird without taking care to see what it may hit. But that is nothing to your fault in letting another boy be punished for what you did. I shall report the matter to the squire, and he will speak to your father about it. You are a wicked, bad boy.

“Mr. White, I will speak to you outside.”

Followed by her daughters, Mrs. Ellison went out; Kate giving a little nod, in reply to the grateful look that Reuben Whitney cast towards her, and his muttered:

“Walk on, my dears,” Mrs. Ellison said. “I will overtake you, in a minute or two.

“This will not do, Mr. White,” she said, when she was alone with the master. “I have told you before that I did not approve of your thrashing so much, and now it is proved that you punish without any sufficient cause, and upon suspicion only. I shall report the case at once to the squire and, unless I am greatly mistaken, you will have to look out for another place.”