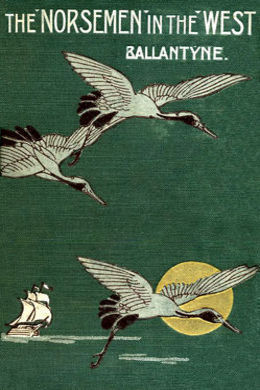 The Norsemen in the West

A tale of adventure and evangelism, Ballantyne transforms into engaging historical fiction the well-known facts of the Icelandic Saga–stories of exploration and adventure, blessed marriage, alternating turmoil and peace with indigenous people–all sprinkled with delightful and humorous stories of day-to-day life surrounding the first European ground breaking in America. The Norsemen in the West carries readers back nearly a thousand years in time, to the days of Leif Ericsson and the early settlements of the seafaring Norsemen. Journey from the shores of Greenland to earliest-recorded America, a plentiful land of lush forests, crystal clear lakes and rivers and abundant fish and game.

One fine autumn evening, between eight and nine hundred years ago, two large hairy creatures, bearing some resemblance to polar bears, might have been seen creeping slowly, and with much caution, toward the summit of a ridge that formed a spur to one of the ice-clad mountains of Greenland. The creatures went on all-fours. They had long bodies, short legs, shorter tails, and large round heads.

Having gained the top of the ridge they peeped over and beheld a hamlet nestled at the foot of a frowning cliff; and at the head of a smiling inlet. We use these terms advisedly, because the cliff, being in deep shadow, looked unusually black and forbidding, while the inlet, besides being under the influence of a profound calm, was lit up on all its dimples by the rays of the setting sun.

The hamlet consisted of one large cottage and half a dozen small cots, besides several sheds and enclosures wherein were a few sleepy-looking sheep, some lean cattle, and several half-starved horses. There was active life there also. Smoke issued from the chimneys; fresh-looking women busied themselves about household work; rosy children tumbled in and out at the doors, while men in rough garments and with ruddy countenances mended nets or repaired boats on the shore. On a bench in front of the principal cottage sat a sturdy man, scarcely middle-aged, with shaggy fair and flowing locks. His right foot served as a horse to a rapturous little boy, whose locks and looks were so like to those of the man that their kinship was obvious–only the man was rugged and rough in exterior; the boy was round and smooth. Tow typified the hair of the man; floss silk that of the boy.

Everything in and around the hamlet bore evidence of peace and thrift. It was a settlement of Norsemen–the first Greenland settlement, established by Eric the Red of Iceland about the year 986–nearly twenty years before the date of the opening of our tale–and the hairy creatures above referred to had gone there to look at it.

Having gazed very intently over the ridge for a considerable time, they crept backwards with extreme caution, and, on getting sufficiently far down the hill-side to be safe from observation, rose on their hind-legs and began to talk; from which circumstance it may be concluded that they were human beings. After talking, grinning, and glaring at each other for a few minutes, with gestures to correspond, as though on the point of engaging in mortal combat, they suddenly wheeled about and walked off at a rapid pace in the direction of a gorge in the mountains, the head of which was shut in by and filled up with cliffs and masses and fields of ice that overtopped the everlasting hills, and rested like a white crest on the blue sky. Vast though it seemed, this was merely a tongue of those great glaciers of the mysterious North which have done, and are still doing, so much to modify the earth’s economy and puzzle antiquarian philosophy; which form the fountain-head of influences that promote the circulation of the great deep, and constitute the cradle of those ponderous icebergs that cover the arctic seas.

From out that gloomy gorge a band of more than a hundred hairy creatures issued with wild shouts and upraised arms to welcome back the adventurous two. They surrounded them, and forthwith the nation–for the entire nation was evidently there–held a general assembly or parliament on the spot. There was a good deal of uproar and confusion in that parliament, with occasional attempts on the part of several speakers to obtain a hearing at one and the same time–in which respects this parliament bore some resemblance to civilised assemblies of the present day. There was also an immense amount of gesticulation and excitement.

At last there uprose a man clad in garments that had once belonged to a seal, and with a face that was quite as round and nearly as flat as a frying-pan. He stood fully half a foot higher than the tallest of his fellows. Like the adventurous two he had a tail–a very short tail–to his coat; but indeed this might be said of all the men of the tribe. The women’s tails, however, were long. Perhaps this was meant as a mark of distinction, for their costume was so very similar to that of the men that their smaller size and longer tails alone marked the difference. To be sure there was additional presumptive evidence of their sex in the fact that most of them carried babies in their hoods; which hoods were made preposterously large for the express purpose of containing the babies.