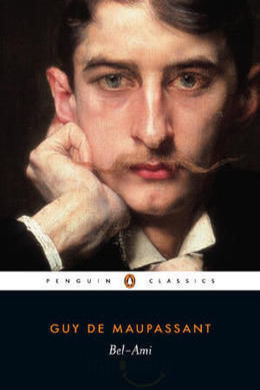 The History of a Scoundrel

Bel-Ami is the story of a ruthlessly ambitious young man (Georges Duroy, christened “Bel-Ami” by his female admirers) making it to the top in fin-de-sihcle Paris. It is a novel about money, sex, and power, set against the background of the politics of the French colonization of North Africa. It explores the dynamics of an urban society uncomfortably close to our own and is a devastating satire of the sleaziness of contemporary journalism. Bel-Ami enjoys the status of an authentic record of the apotheosis of bourgeois capitalism under the Third Republic. But the creative tension between its analysis of modern behavior and its identifiably late nineteenth-century fabric is one of the reasons why Bel-Ami remains one of the finest French novels of its time, as well as being recognized as Maupassant’s greatest achievement as a novelist.

After changing his five-franc piece Georges Duroy left the restaurant. He twisted his mustache in military style and cast a rapid, sweeping glance upon the diners, among whom were three saleswomen, an untidy music-teacher of uncertain age, and two women with their husbands.

When he reached the sidewalk, he paused to consider what route he should take. It was the twenty-eighth of June and he had only three francs in his pocket to last him the remainder of the month. That meant two dinners and no lunches, or two lunches and no dinners, according to choice. As he pondered upon this unpleasant state of affairs, he sauntered down Rue Notre Dame de Lorette, preserving his military air and carriage, and rudely jostled the people upon the streets in order to clear a path for himself. He appeared to be hostile to the passers-by, and even to the houses, the entire city.

Tall, well-built, fair, with blue eyes, a curled mustache, hair naturally wavy and parted in the middle, he recalled the hero of the popular romances.

It was one of those sultry, Parisian evenings when not a breath of air is stirring; the sewers exhaled poisonous gases and the restaurants the disagreeable odors of cooking and of kindred smells. Porters in their shirt-sleeves, astride their chairs, smoked their pipes at the carriage gates, and pedestrians strolled leisurely along, hats in hand.

When Georges Duroy reached the boulevard he halted again, undecided as to which road to choose. Finally he turned toward the Madeleine and followed the tide of people.

The large, well-patronized cafes tempted Duroy, but were he to drink only two glasses of beer in an evening, farewell to the meager supper the following night! Yet he said to himself: “I will take a glass at the Americain. By Jove, I am thirsty.”

He glanced at men seated at the tables, men who could afford to slake their thirst, and he scowled at them. “Rascals!” he muttered. If he could have caught one of them at a corner in the dark he would have choked him without a scruple! He recalled the two years spent in Africa, and the manner in which he had extorted money from the Arabs. A smile hovered about his lips at the recollection of an escapade which had cost three men their lives, a foray which had given his two comrades and himself seventy fowls, two sheep, money, and something to laugh about for six months. The culprits were never found; indeed, they were not sought for, the Arab being looked upon as the soldier’s prey.

But in Paris it was different; there one could not commit such deeds with impunity. He regretted that he had not remained where he was; but he had hoped to improve his condition–and for that reason he was in Paris!

He passed the Vaudeville and stopped at the Cafe Americain, debating as to whether he should take that “glass.” Before deciding, he glanced at a clock; it was a quarter past nine. He knew that when the beer was placed in front of him, he would drink it; and then what would he do at eleven o’clock? So he walked on, intending to go as far as the Madeleine and return.

When he reached the Place de l’Opera, a tall, young man passed him, whose face he fancied was familiar. He followed him, repeating: “Where the deuce have I seen that fellow?”

For a time he racked his brain in vain; then suddenly he saw the same man, but not so corpulent and more youthful, attired in the uniform of a Hussar. He exclaimed: “Wait, Forestier!” and hastening up to him, laid his hand upon the man’s shoulder. The latter turned, looked at him, and said: “What do you want, sir?”

Duroy began to laugh: “Don’t you remember me?”

“Not remember Georges Duroy of the Sixth Hussars.”

“Oh, I am not very well. I cough six months out of the twelve as a result of bronchitis contracted at Bougival, about the time of my return to Paris four years ago.”

“But you look well.”

Forestier, taking his former comrade’s arm, told him of his malady, of the consultations, the opinions and the advice of the doctors and of the difficulty of following their advice in his position. They ordered him to spend the winter in the south, but how could he? He was married and was a journalist in a responsible editorial position.

“I manage the political department on ‘La Vie Francaise’; I report the doings of the Senate for ‘Le Salut,’ and from time to time I write for ‘La Planete.’ That is what I am doing.”

Duroy, in surprise, glanced at him. He was very much changed. Formerly Forestier had been thin, giddy, noisy, and always in good spirits. But three years of life in Paris had made another man of him; now he was stout and serious, and his hair was gray on his temples although he could not number more than twenty-seven years.

Forestier asked: “Where are you going?”