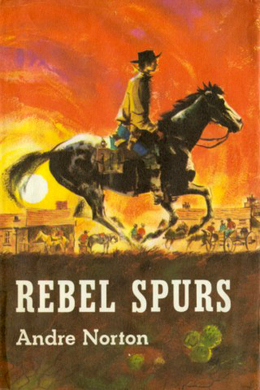 In 1866, only men uprooted by war had reason to ride into Tubacca, Arizona, a nondescript town as shattered and anonymous as the veterans drifting through it. So when Drew Rennie, newly discharged from Forrest’s Confederate scouts, arrived leading everything he owned behind him-his thoroughbred stud Shiloh, a mare about to foal, and a mule-he knew his business would not be questioned. To anyone in Tubacca there could be only one extraordinary thing about Drew, and that he could not reveal: his name, Rennie.

Drew had come west from Kentucky to find a father he had thought dead until the year before. Kinship with a man like Hunt Rennie, however-the legendary Don Cazar, owner of a matchless range and prize stallions-was not a claim to be made quickly or lightly. Posing as Drew Kirby the young veteran contrived to get himself and his friend Anse hired as corral hands at Rennie’s Range, but he was hardly prepared for the suspicion and danger which stood between him and his father. As hotheaded as his father, Drew was ready to move on to California-until the day all proof of his Rennie name was stolen from him, and his unwarranted arrest for horse-thieving brought on the accusations of the one man whose trust he needed.

Andre Norton’s Ride Proud, Rebel! dramatically portrayed the last year of the Confederacy, when brave men like Drew Rennie met defeat with honour. In this sequel, Drew’s struggle to establish his identity and begin life anew in a raw, unsettled land reflects the courage of thousands of rootless men set adrift by the American Civil War.

Even the coming of an autumn dusk could not subdue the color of this land. Shadows here were not gray or black; they were violet and purple. The crumbling adobe walls were laced by strings of crimson peppers, vivid in the torch and lantern light. It had been this way for days, red and yellow, violet–colors he had hardly been aware existed back in the cool green, silver, gray-brown of Kentucky.

So this was Tubacca! The rider shifted his weight in the saddle and gazed about him with watchful interest. Back in ‘59 this had been a flourishing town, well on its way to prominence in the Southwest. The mines in the hills behind producing wealth, the fact that it was a watering place on two cross-country routes–the one from Tucson down into Sonora of Old Mexico, the other into California–had all fed its growth.

Then the war…. The withdrawal of the army, the invasion of Sibley’s Confederate forces which had reached this far in the persons of Howard’s Arizona Rangers–and most of all the raiding, vicious, deadly, and continual, by Apaches and outlaws–had blasted Tubacca. Now, in the fall of 1866, it was a third of what it had been, with a ragged fringe of dilapidated adobes crumbling back into the soil. Only this heart core was still alive in the dusk.

Smell, a myriad of smells, some to tickle a flat stomach, others to wrinkle the nose. Under the rider the big stud moved, tossed his head, drawing the young man’s attention from the town back to his own immediate concerns. The animal he rode, the two he led were, at first glance, far more noticeable than the dusty rider himself.

His saddle was cinched about the barrel of a big gray colt, one that could not have been more than five years old but showed enough power and breeding to attract attention in any horse-conscious community. Here was a thoroughbred of the same blood which had pounded race tracks in Virginia and in Kentucky to best all comers. Even now, after weeks on the trail, with a day’s burden of alkali dust grimed into his coat, the stud was a beautiful thing. And his match was the mare on the lead rope, plainly a lady of family, perhaps of the same line, since her coat was also silver. She crowded closer, nickered plaintively.

She was answered by an anxious bray from the fourth member of the party. The mule bearing the trail pack was in ludicrous contrast to his own aristocratic companions. His long head, with one entirely limp and flopping ear, was grotesquely ugly, the carcass beneath the pack a bone rack, all sharp angles and dusty hide. Looks, however, as his master could have proven, were deceiving.

“Soooo–” The rider’s voice was husky from swallowing trail grit, but it was tuned to the soothing croon of a practiced horse trainer. “Sooo–lady, just a little farther now, girl….”

From the one-story building on the rider’s right a man emerged. He paused to light a long Mexican cigarillo, and as he held the match to let the sulfur burn away, his eyes fell upon the stallion. A casual interest tightened into open appreciation as he stepped from under the porch-overhang into the street.

“That is some horse, sir.” His voice was that of an educated gentleman. The lantern at the end of the porch picked out the fine ruffled linen of his shirt, a vest with a painted design of fighting cocks, and the wink of gold buttons. The rather extravagant color of his clothing matched well with the town.

“I think so.” The answer was short and yet not discourteous.

Again the mare voiced her complaint, and the rider turned to the gentleman. “There is a livery stable here, suh?” Unconsciously he reverted in turn to the rather formal speech pattern of another place and time.

The man in the painted vest had transferred his attention from stallion to mare. “Yes. Quickest way is down this alley. Tobe Kells owns it. He’s a tolerable vet, too. She’s near her time, ain’t she?”

“Yes.” The rider raised one finger to the straight wide brim of his low-crowned black hat. He was already turning his mount when the townsman added:

“No hotel here, stranger. But the Four Jacks serves a pretty good meal and keeps a couple of beds for overnighters. You’re welcome back when you’ve settled the little lady. She Virginia stock?”

“Kentucky,” the rider answered, and then his lips tightened into a compressed line. Was it a mistake to admit even that much? He would have to watch every word he said in this town. He tugged gently at the lead rope and walked Shiloh ahead at a pace which did not urge Shadow to any great effort. The mule, Croaker, fell in behind her so that they were strung out in the familiar pattern which had been theirs clear from Texas.

Minutes later her owner was rubbing down the fretful Shadow, murmuring the soothing words to quiet her. The lean, gray-haired man who had ushered them into the stable stood eyeing the mare’s distended sides.