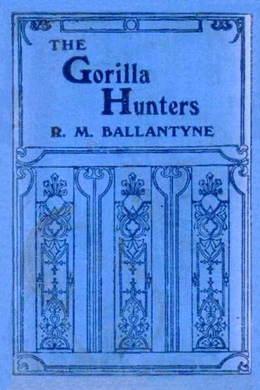 In this exciting sequel to The Coral Island, Ballantyne continues the story of Ralph Rover, Jack Martin, and Peterkin Gay who, after their return to England for rest from their South Seas adventures, are now intent on joining the great hunters in Africa for a journey to the interior of the Dark Continent. In the course of their safari adventures, Ralph, Jack, and Peterkin fight with savages, hunt elephants and gorillas, and visit native tribes. Peterkin gets thrown by a wild African buffalo, and Ralph is hugged by a gorilla. Find out how their excursion concludes and whether they all survive the African journey!

It was five o’clock in the afternoon. There can be no doubt whatever as to that. Old Agnes may say what she pleases—she has a habit of doing so—but I know for certain (because I looked at my watch not ten minutes before it happened) that it was exactly five o’clock in the afternoon when I received a most singular and every way remarkable visit—a visit which has left an indelible impression on my memory, as well it might; for, independent of its singularity and unexpectedness, one of its results was the series of strange adventures which are faithfully detailed in this volume.

I was seated in an armchair in my private study in a small town on the west coast of England. It was a splendid afternoon, and it was exactly five o’clock. Mark that. Not that there is anything singular about the mere fact, neither is it in any way mixed up with the thread of this tale; but old Agnes is very obstinate—singularly positive—and I have a special desire that she should see it in print, that I have not given in on that point. Yes, it was five precisely, and a beautiful evening. I was ruminating, as I frequently do, on the pleasant memories of bygone days, especially the happy days that I spent long ago among the coral islands of the Pacific, when a tap at the door aroused me.

Old Agnes, I may remark, is a Scotchwoman.

“I’ll take my chance of that.”

“I’ll take my chance of that too; only do show him in, my good woman,” said I, with a gesture of impatience that caused the excellent (though obstinate) old creature to depart, grumbling.

In another moment a quick step was heard on the stair, and a stranger burst into the room, shut the door in my landlady’s face as she followed him, and locked it.

I was naturally surprised, though not alarmed, by the abrupt and eccentric conduct of my visitor, who did not condescend to take off his hat, but stood with his arms folded on his breast, gazing at me and breathing hard.

“You are agitated, sir; pray be seated,” said I, pointing to a chair.

The stranger, who was a little man and evidently a gentleman, made no reply, but, seizing a chair, placed it exactly before me, sat down on it as he would have seated himself on a horse, rested his arms on the back, and stared me in the face.

“You are disposed to be facetious,” said I, smiling (for I never take offence without excessively good reason).

“Not at all, by no means,” said he, taking off his hat and throwing it recklessly on the floor. “You are Mr Rover, I presume?”

“Are you? oh, that’s yet to be seen! Pray, is your Christian name Ralph?”

“It is,” said I, in some surprise at the coolness of my visitor.

“My birthday was yesterday, and my age is twenty–two. You appear to know more of my private history than I have the pleasure of knowing of yours. Pray, sir, may I—but, bless me! are you unwell?”

I asked this in some alarm, because the little man was rolling about in his seat, holding his sides, and growing very red in the face.

“Oh no! not at all; perfectly well—never was better in my life,” he said, becoming all at once preternaturally grave. “You were once in the Pacific—lived on a coral island—”

“Oh, don’t trouble yourself to answer. Just shut up for a minute or two. You were rather a soft green youth then, and you don’t seem to be much harder or less verdant now.”

“Sir!” I exclaimed, getting angry.

“Just so,” continued he, “and you knew a young rascal there—”

“I know a rascal here,” I exclaimed, starting up, “whom I’ll kick—”

“What!” cried the little stranger, also starting up and capsizing the chair; “Ralph Rover, has time and sunburning and war so changed my visage that you cannot recognise Peterkin?”

I almost gasped for breath.

I am not prone to indulge in effeminate demonstration, but I am not ashamed to confess that when I gazed on the weather–beaten though ruddy countenance of my old companion, and observed the eager glance of his bright blue eyes, I was quite overcome, and rushed violently into his arms. I may also add that until that day I had had no idea of Peterkin’s physical strength; for during the next five minutes he twisted me about and spun me round and round my own room until my brain began to reel, and I was fain to cry him mercy.