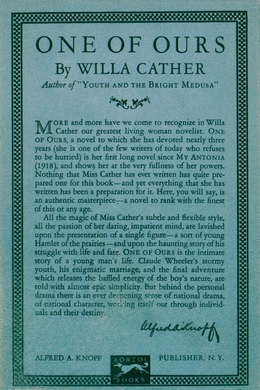 An intimate story of young man’s life. Claude Wheeler’s stormy youth, his enigmatic marriage, and the final adventure which releases the baffled energy of the boy’s nature, are told with almost epic simplicity. World War I offers him even more, but he may crave excitement more than life itself can allow. Wanting it as much as he does can’t protect him from the consequences of personal bravado in an age of killing machines. But behind the personal drama there is an ever deepening sense of national drama, of national character, working itself our through individuals and their destiny.

Claude Wheeler opened his eyes before the sun was up and vigorously shook his younger brother, who lay in the other half of the same bed.

“Ralph, Ralph, get awake! Come down and help me wash the car.”

“Why, aren’t we going to the circus today?”

“Car’s all right. Let me alone.” The boy turned over and pulled the sheet up to his face, to shut out the light which was beginning to come through the curtainless windows.

Claude rose and dressed,–a simple operation which took very little time. He crept down two flights of stairs, feeling his way in the dusk, his red hair standing up in peaks, like a cock’s comb. He went through the kitchen into the adjoining washroom, which held two porcelain stands with running water. Everybody had washed before going to bed, apparently, and the bowls were ringed with a dark sediment which the hard, alkaline water had not dissolved. Shutting the door on this disorder, he turned back to the kitchen, took Mahailey’s tin basin, doused his face and head in cold water, and began to plaster down his wet hair.

Old Mahailey herself came in from the yard, with her apron full of corn-cobs to start a fire in the kitchen stove. She smiled at him in the foolish fond way she often had with him when they were alone.

“What air you gittin’ up for a-ready, boy? You goin’ to the circus before breakfast? Don’t you make no noise, else you’ll have ‘em all down here before I git my fire a-goin’.”

“All right, Mahailey.” Claude caught up his cap and ran out of doors, down the hillside toward the barn. The sun popped up over the edge of the prairie like a broad, smiling face; the light poured across the close-cropped August pastures and the hilly, timbered windings of Lovely Creek, a clear little stream with a sand bottom, that curled and twisted playfully about through the south section of the big Wheeler ranch. It was a fine day to go to the circus at Frankfort, a fine day to do anything; the sort of day that must, somehow, turn out well.

Claude backed the little Ford car out of its shed, ran it up to the horse-tank, and began to throw water on the mud-crusted wheels and windshield. While he was at work the two hired men, Dan and Jerry, came shambling down the hill to feed the stock. Jerry was grumbling and swearing about something, but Claude wrung out his wet rags and, beyond a nod, paid no attention to them. Somehow his father always managed to have the roughest and dirtiest hired men in the country working for him. Claude had a grievance against Jerry just now, because of his treatment of one of the horses.

Molly was a faithful old mare, the mother of many colts; Claude and his younger brother had learned to ride on her. This man Jerry, taking her out to work one morning, let her step on a board with a nail sticking up in it. He pulled the nail out of her foot, said nothing to anybody, and drove her to the cultivator all day. Now she had been standing in her stall for weeks, patiently suffering, her body wretchedly thin, and her leg swollen until it looked like an elephant’s. She would have to stand there, the veterinary said, until her hoof came off and she grew a new one, and she would always be stiff. Jerry had not been discharged, and he exhibited the poor animal as if she were a credit to him.

Mahailey came out on the hilltop and rang the breakfast bell. After the hired men went up to the house, Claude slipped into the barn to see that Molly had got her share of oats. She was eating quietly, her head hanging, and her scaly, dead-looking foot lifted just a little from the ground. When he stroked her neck and talked to her she stopped grinding and gazed at him mournfully. She knew him, and wrinkled her nose and drew her upper lip back from her worn teeth, to show that she liked being petted. She let him touch her foot and examine her leg.

When Claude reached the kitchen, his mother was sitting at one end of the breakfast table, pouring weak coffee, his brother and Dan and Jerry were in their chairs, and Mahailey was baking griddle cakes at the stove. A moment later Mr. Wheeler came down the enclosed stairway and walked the length of the table to his own place. He was a very large man, taller and broader than any of his neighbours. He seldom wore a coat in summer, and his rumpled shirt bulged out carelessly over the belt of his trousers. His florid face was clean shaven, likely to be a trifle tobacco-stained about the mouth, and it was conspicuous both for good-nature and coarse humour, and for an imperturbable physical composure. Nobody in the county had ever seen Nat Wheeler flustered about anything, and nobody had ever heard him speak with complete seriousness. He kept up his easy-going, jocular affability even with his own family.