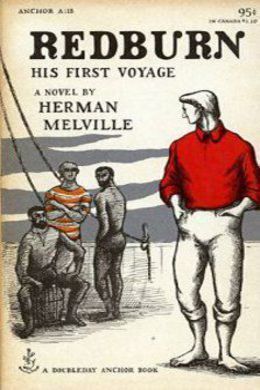 Wellington Redburn is a fifteen-year-old from the state of New York, with only one dream - to run away to sea. However, when he does fulfil this long-held fantasy, he quickly finds that reality as a cabin boy is far harsher than he ever imagined. Mocked by the crew on board the Highlander for his weakness and bullied by the vicious and merciless sailor Jackson, Wellington must struggle to endure the long journey from New York to Liverpool. But when he does reach England, he is equally horrified by what he finds there: poverty, desperation and moral corruption. Inspired by Melville’s own youthful experiences on board a cargo boat, this is a compelling tale of innocence transformed, through bitter experience, into disillusionment. A fascinating sea journal and coming-of-age tale, Redburn provides a unique insight into the mind of one of America’s greatest novelists.

“Wellingborough, as you are going to sea, suppose you take this shooting-jacket of mine along; it’s just the thing–take it, it will save the expense of another. You see, it’s quite warm; fine long skirts, stout horn buttons, and plenty of pockets.”

Out of the goodness and simplicity of his heart, thus spoke my elder brother to me, upon the eve of my departure for the seaport.

“And, Wellingborough,” he added, “since we are both short of money, and you want an outfit, and I Have none to give, you may as well take my fowling-piece along, and sell it in New York for what you can get.–Nay, take it; it’s of no use to me now; I can’t find it in powder any more.”

I was then but a boy. Some time previous my mother had removed from New York to a pleasant village on the Hudson River, where we lived in a small house, in a quiet way. Sad disappointments in several plans which I had sketched for my future life; the necessity of doing something for myself, united to a naturally roving disposition, had now conspired within me, to send me to sea as a sailor.

For months previous I had been poring over old New York papers, delightedly perusing the long columns of ship advertisements, all of which possessed a strange, romantic charm to me. Over and over again I devoured such announcements as the following:

“The coppered and copper-fastened brig Leda, having nearly completed her cargo, will sail for the above port on Tuesday the twentieth of May. For freight or passage apply on board at Coenties Slip.”

To my young inland imagination every word in an advertisement like this, suggested volumes of thought.

A brig! The very word summoned up the idea of a black, sea-worn craft, with high, cozy bulwarks, and rakish masts and yards.

Coppered and copper-fastened! That fairly smelt of the salt water! How different such vessels must be from the wooden, one-masted, green-and- white-painted sloops, that glided up and down the river before our house on the bank.

Nearly completed her cargo! How momentous the announcement; suggesting ideas, too, of musty bales, and cases of silks and satins, and filling me with contempt for the vile deck-loads of hay and lumber, with which my river experience was familiar.

“Will sail on Tuesday the 20th of May”–and the newspaper bore date the fifth of the month! Fifteen whole days beforehand; think of that; what an important voyage it must be, that the time of sailing was fixed upon so long beforehand; the river sloops were not used to make such prospective announcements.

“For freight or passage apply on board!”

Think of going on board a coppered and copper-fastened brig, and taking passage for Bremen! And who could be going to Bremen? No one but foreigners, doubtless; men of dark complexions and jet-black whiskers, who talked French.

Plenty more brigs and any quantity of ships must be lying there. Coenties Slip must be somewhere near ranges of grim-looking warehouses, with rusty iron doors and shutters, and tiled roofs; and old anchors and chain-cable piled on the walk. Old-fashioned coffeehouses, also, much abound in that neighborhood, with sunburnt sea-captains going in and out, smoking cigars, and talking about Havanna, London, and Calcutta.

All these my imaginations were wonderfully assisted by certain shadowy reminiscences of wharves, and warehouses, and shipping, with which a residence in a seaport during early childhood had supplied me.

Particularly, I remembered standing with my father on the wharf when a large ship was getting under way, and rounding the head of the pier. I remembered the yo heave ho! of the sailors, as they just showed their woolen caps above the high bulwarks. I remembered how I thought of their crossing the great ocean; and that that very ship, and those very sailors, so near to me then, would after a time be actually in Europe.

Added to these reminiscences my father, now dead, had several times crossed the Atlantic on business affairs, for he had been an importer in Broad-street. And of winter evenings in New York, by the well-remembered sea-coal fire in old Greenwich-street, he used to tell my brother and me of the monstrous waves at sea, mountain high; of the masts bending like twigs; and all about Havre, and Liverpool, and about going up into the ball of St. Paul’s in London. Indeed, during my early life, most of my thoughts of the sea were connected with the land; but with fine old lands, full of mossy cathedrals and churches, and long, narrow, crooked streets without sidewalks, and lined with strange houses.