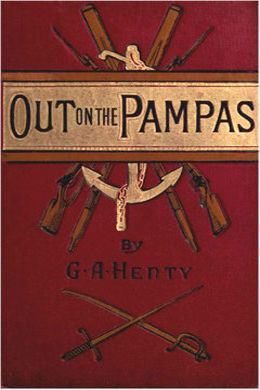 Out on the Pampas

This is a tale of young Englishmen who go out to the Argentine with their family. They have many adventures at the time of the Mexican - American War including a raid by the Pampas Indians in which their sister is abducted. They rescue the girl, make peace with the Indians, and return prosperously to England.

‘What are you thinking of, Frank?’ Mrs. Hardy asked her husband one evening, after an unusually long silence on his part.

‘Well, my dear, I was thinking of a good many things. In the first place, I think, I began with wondering what I should make of the boys; and that led to such a train of thoughts about ourselves and our circumstances, that I hardly knew where I was when you spoke to me.’

Mr. Hardy spoke cheerfully, but his wife saw at once that it was with an effort that he did so. She put down the work upon which she was engaged, and moved her chair nearer to his by the fire. ‘It is a serious question, Frank, about the boys. Charley is fifteen now, and Hubert fourteen. I wonder myself sometimes what we shall do with them.’

‘There seems no opening here in England for young fellows. The professions are crowded, even if they were not altogether beyond our means; and as to a clerkship, they had better have a trade, and stick to it: they would be far happier, and nearly as well paid. The fact is, Clara,’ and here Mr. Hardy paused a little, as if to gain courage to say what he feared would be very disagreeable to his wife,–‘the fact is, we are altogether too crowded here. The best thing for the children, by far, and I think the best thing for ourselves, would be to emigrate.’

Mrs. Hardy gave a little sigh, but said nothing, and sat looking quietly into the fire, as her husband went on: ‘You see, my dear, I am just, and only just earning enough for us to live upon. Nor is there any strong probability of an increase of business. The boys, as you say, are growing up, and I see no prospect of giving them a fair start in life. Abroad it is altogether different: we can buy land and stock it for next to nothing. We should live roughly, certainly; but at least there is no fear for the future, and we should start our boys in life with a fair certainty of success. Still, Clara, I do not of course mean that I have made up my mind upon the subject. It is far too serious a matter to decide upon hastily. I only threw out the suggestion; and if you, after thinking it over, are against it, there is an end of the matter.’

Mrs. Hardy was silent for a little, and a tear sparkled on her cheek in the fire-light; then she said, ‘I am not surprised, Frank, at what you have said. In fact I have expected it for some time. I have observed you looking over books upon foreign countries, and have seen that you often sat thoughtful and quiet. I guessed, therefore, what you had in your mind. Of course, dear, as a woman, I shrink from the thought of leaving all our friends and going to quite a strange country, but I don’t think that I am afraid of the hardships or discomfort. Thousands of other women have gone through them, and there is no reason why I should not do the same. I do think with you that it would be a good thing for the boys, perhaps for the girls too; and that, when we have got over the first hardships, we too should be happier and more free from care than we are now. So you see, Frank, you will meet with no opposition from me; and if, after deliberation, you really determine that it is the best thing to do, I shall be ready to agree with you. But it is a hard thought just at first, so please do not say any more about it to-night.’

Mr. Hardy was an architect, as his father had been before him. He had not, however, entered the office at the usual age, but when eighteen had gone out to the United States, to visit an uncle who had settled there. After spending some time with him, the love of adventure had taken him to the far west, and there he had hunted and shot for nearly three years, till a letter, long delayed on the way, entreated him to return to England, as his father’s health was failing. He at once started for England, and found that his father was in a feeble state of health, but was still able to carry on the business. Frank saw, however, that he was unequal to the work, and so entered the office, working hard to make up for lost time. He was a good draughtsman, and was shortly able to take a great burden off his father’s shoulders.

He had not been long at home, however, before he fell in love with Clara Aintree, the daughter of a clergyman; and his father making over to him a share in the business, they were married just as Frank attained his twenty-fourth year, his wife being about nineteen. Two years after the marriage Mr. Hardy sen. died, and from that time Frank had carried on the business alone.