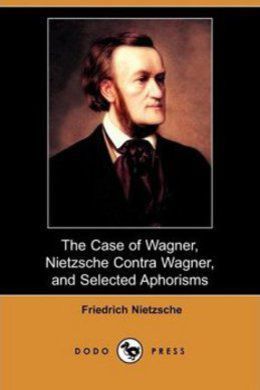 The Case Of Wagner

The Case Against Wagner was one Nietzsche’s last books, and his wittiest. In Wagner’s music, in his doctrine, in his whole concept of art, Nietzsche saw the confirmation, the promotion, even the encouragement, of that decadence and degeneration which is now rampant in Europe; and it is for this reason, although to the end of his life he still loved Wagner, the man and the friend, that we find him, on the very eve of his spiritual death, exhorting us to abjure Wagner the musician and the artist.

Yesterday–would you believe it?–I heard Bizet’s masterpiece for the twentieth time. Once more I attended with the same gentle reverence; once again I did not run away. This triumph over my impatience surprises me. How such a work completes one! Through it one almost becomes a “masterpiece” oneself–And, as a matter of fact, each time I heard Carmen it seemed to me that I was more of a philosopher, a better philosopher than at other times: I became so forbearing, so happy, so Indian, so settled…. To sit for five hours: the first step to holiness!–May I be allowed to say that Bizet’s orchestration is the only one that I can endure now? That other orchestration which is all the rage at present–the Wagnerian–is brutal, artificial and “unsophisticated” withal, hence its appeal to all the three senses of the modern soul at once. How terribly Wagnerian orchestration affects me! I call it the Sirocco. A disagreeable sweat breaks out all over me. All my fine weather vanishes.

Bizet’s music seems to me perfect. It comes forward lightly, gracefully, stylishly. It is lovable, it does not sweat. “All that is good is easy, everything divine runs with light feet”: this is the first principle of my æsthetics. This music is wicked, refined, fatalistic, and withal remains popular,–it possesses the refinement of a race, not of an individual. It is rich. It is definite. It builds, organises, completes, and in this sense it stands as a contrast to the polypus in music, to “endless melody”. Have more painful, more tragic accents ever been heard on the stage before? And how are they obtained? Without grimaces! Without counterfeiting of any kind! Free from the lie of the grand style!–In short: this music assumes that the listener is intelligent even as a musician,–thereby it is the opposite of Wagner, who, apart from everything else, was in any case the most ill-mannered genius on earth (Wagner takes us as if … , he repeats a thing so often that we become desperate,–that we ultimately believe it).

And once more: I become a better man when Bizet speaks to me. Also a better musician, a better listener. Is it in any way possible to listen better?–I even burrow behind this music with my ears. I hear its very cause. I seem to assist at its birth. I tremble before the dangers which this daring music runs, I am enraptured over those happy accidents for which even Bizet himself may not be responsible.–And, strange to say, at bottom I do not give it a thought, or am not aware how much thought I really do give it. For quite other ideas are running through my head the while…. Has any one ever observed that music emancipates the spirit? gives wings to thought? and that the more one becomes a musician the more one is also a philosopher? The grey sky of abstraction seems thrilled by flashes of lightning; the light is strong enough to reveal all the details of things; to enable one to grapple with problems; and the world is surveyed as if from a mountain top–With this I have defined philosophical pathos–And unexpectedly answers drop into my lap, a small hailstorm of ice and wisdom, of problems solved. Where am I? Bizet makes me productive. Everything that is good makes me productive. I have gratitude for nothing else, nor have I any other touchstone for testing what is good.

Bizet’s work also saves; Wagner is not the only “Saviour.” With it one bids farewell to the damp north and to all the fog of the Wagnerian ideal. Even the action in itself delivers us from these things. From Merimée it has this logic even in passion, from him it has the direct line, inexorable necessity, but what it has above all else is that which belongs to sub-tropical zones–that dryness of atmosphere, that limpidezza of the air. Here in every respect the climate is altered. Here another kind of sensuality, another kind of sensitiveness and another kind of cheerfulness make their appeal. This music is gay, but not in a French or German way. Its gaiety is African; fate hangs over it, its happiness is short, sudden, without reprieve. I envy Bizet for having had the courage of this sensitiveness, which hitherto in the cultured music of Europe has found no means of expression,–of this southern, tawny, sunburnt sensitiveness…. What a joy the golden afternoon of its happiness is to us! When we look out, with this music in our minds, we wonder whether we have ever seen the sea so calm. And how soothing is this Moorish dancing! How, for once, even our insatiability gets sated by its lascivious melancholy!–And finally love, love translated back into Nature! Not the love of a “cultured girl!”–no Senta-sentimentality.