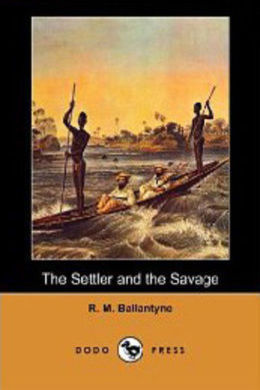 The Settler and the Savage

In this tale I have endeavoured to give a truth ful, though unavoidably slight, outline of the stirring incidents of a most important period in the history of the Colony of the Cape of Good hope. Ruyter quietly told the savage that he would then have to take the consequences, and urged, in addition, that it was folly to suppose the Kafirs were in a condition to make war on the white men just then. It was barely a year since they had been totally routed and driven across the Great Fish River with great slaughter. No warrior of common sense would think of renewing hostilities at such a time–their young men slain, their resources exhausted.

A solitary horseman—a youth in early manhood—riding at a snail’s pace over the great plains, or karroo, of South Africa. His chin on his breast; his hands in the pockets of an old shooting–coat; his legs in ragged trousers, and his feet in worn–out boots. Regardless of stirrups, the last are dangling. The reins hang on the neck of his steed, whose head may be said to dangle from its shoulders, so nearly does its nose approach the ground. A felt hat covers the youth’s curly black head, and a double–barrelled gun is slung across his broad shoulders.

We present this picture to the reader as a subject of contemplation.

It was in the first quarter of the present century that the youth referred to—Charlie Considine by name—rode thus meditatively over that South African karroo. His depression was evidently not due to lack of spirit, for, when he suddenly awoke from his reverie, drew himself up and shook back his hair, his dark eyes opened with something like a flash. They lost some of their fire, however, as he gazed round on the hot plain which undulated like the great ocean to the horizon, where a line of blue indicated mountains.

The truth is that Charlie Considine was lost—utterly lost on the karroo! That his horse was in the same lost condition became apparent from its stopping without orders and looking round languidly with a sigh.

“Come, Rob Roy,” said the youth, gathering up the reins and patting the steed’s neck, “this will never do. You and I must not give in to our first misfortune. No doubt the want of water for two days is hard to bear, but we are strong and young both of us. Come, let’s try at least for a sheltering bush to sleep under, before the sun goes down.”

Animated by the cheering voice, if not by the words, of its rider, the horse responded to the exhortation by breaking into a shuffling canter.

After a short time the youth came in sight of what appeared to be a herd of cattle in the far distance. In eager expectation he galloped towards them and found that his conjectures were correct. They were cattle in charge of one of that lowest of the human race, a Bushman. The diminutive, black–skinned, and monkey–faced creature was nearly naked. He carried a sheepskin kaross, or blanket, on his left shoulder, and a knobbed stick, or “kerrie,” in his right hand.

“Can you speak English?” asked Considine as he rode up.

The Bushman looked vacant and made no reply.

“Where is your master’s house?” asked the youth.

A stare was the only answer.

“Can’t you speak, you dried–up essence of stupidity!” exclaimed Charlie with impatience.

At this the Bushman uttered something with so many klicks, klucks, and gurgles in it that his interrogator at once relinquished the use of the tongue, and took to signs, but with no better success, his efforts having only the effect of causing the mouth of the Bushman to expand from ear to ear. Uttering a few more klicks and gurgles, he pointed in the direction of the setting sun. As Considine could elicit no fuller information he bade him a contemptuous farewell and rode away in the direction indicated.

He had not gone far when a dark speck became visible on the horizon directly in front.

“Ho! Rob,” he exclaimed, “that looks like something—a bush, is it? If so, we may find water there, who knows—eh? No, it can’t be a bush, for it moves,” he added in a tone of disappointment. “Why, I do believe it’s an ostrich! Well, if we can’t find anything to drink, I’ll try to get something to eat.”

Urging his jaded steed into a gallop, the youth soon drew near enough to discover that the object was neither bush nor ostrich, but a horseman.

The times of which we write were unsettled. Considine, although “lost,” was sufficiently aware of his whereabouts to understand that he was near the north–eastern frontier of Cape Colony. He deemed it prudent, therefore, to unsling his gun. On drawing nearer he became convinced from the appearance of the stranger that he could not be a Kafir. When close enough to perceive that he was a white man, mounted and armed much like himself, he re–slung his gun, waved his cap in token of friendship, and galloped forward with the confidence of youth.

The stranger proved to be a young man of about his own age—a little over twenty—but much taller and more massive in frame. He was, indeed, a young giant, and bestrode a horse suitable to his weight. He was clad in the rough woollen and leathern garments worn by the frontier farmers, or boers, of that period, and carried one of those long heavy flint–lock guns, or “roers,” which the Dutch–African colonist then deemed the most effective weapon in the universe.

“Well met!” exclaimed Considine heartily, as he rode up.

“Humph! that depends on whether we meet as friends or foes,” replied the stranger, with a smile on his cheerful countenance that accorded ill with the caution of his words.”