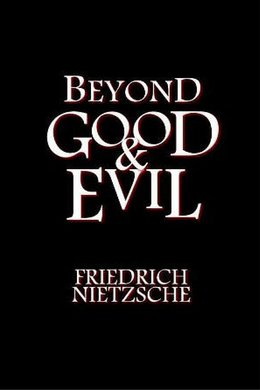 Beyond Good and Evil

A scathing and powerful critique of philosophy, religion and science. Here Nietzsche presents us with problems and challenges that are as troubling as they are inspiring, while at the same time outlining the virtues, ideas, and practices which will characterise the philosophy of the future. Relentless, energetic, tirelessly probing, he both determines that philosophy’s agenda and is himself the embodiment of the type of thought he wants to foster.

The Will to Truth, which is to tempt us to many a hazardous enterprise, the famous Truthfulness of which all philosophers have hitherto spoken with respect, what questions has this Will to Truth not laid before us! What strange, perplexing, questionable questions! It is already a long story; yet it seems as if it were hardly commenced. Is it any wonder if we at last grow distrustful, lose patience, and turn impatiently away? That this Sphinx teaches us at last to ask questions ourselves? WHO is it really that puts questions to us here? WHAT really is this “Will to Truth” in us? In fact we made a long halt at the question as to the origin of this Will–until at last we came to an absolute standstill before a yet more fundamental question. We inquired about the VALUE of this Will. Granted that we want the truth: WHY NOT RATHER untruth? And uncertainty? Even ignorance? The problem of the value of truth presented itself before us–or was it we who presented ourselves before the problem? Which of us is the Oedipus here? Which the Sphinx? It would seem to be a rendezvous of questions and notes of interrogation. And could it be believed that it at last seems to us as if the problem had never been propounded before, as if we were the first to discern it, get a sight of it, and RISK RAISING it? For there is risk in raising it, perhaps there is no greater risk.

“How could anything originate out of its opposite? For example, truth out of error? or the Will to Truth out of the will to deception? or the generous deed out of selfishness? or the pure sun-bright vision of the wise man out of covetousness? Such genesis is impossible; whoever dreams of it is a fool, nay, worse than a fool; things of the highest value must have a different origin, an origin of THEIR own–in this transitory, seductive, illusory, paltry world, in this turmoil of delusion and cupidity, they cannot have their source. But rather in the lap of Being, in the intransitory, in the concealed God, in the ‘Thing-in-itself–THERE must be their source, and nowhere else!”–This mode of reasoning discloses the typical prejudice by which metaphysicians of all times can be recognized, this mode of valuation is at the back of all their logical procedure; through this “belief” of theirs, they exert themselves for their “knowledge,” for something that is in the end solemnly christened “the Truth.” The fundamental belief of metaphysicians is THE BELIEF IN ANTITHESES OF VALUES. It never occurred even to the wariest of them to doubt here on the very threshold (where doubt, however, was most necessary); though they had made a solemn vow, “DE OMNIBUS DUBITANDUM.” For it may be doubted, firstly, whether antitheses exist at all; and secondly, whether the popular valuations and antitheses of value upon which metaphysicians have set their seal, are not perhaps merely superficial estimates, merely provisional perspectives, besides being probably made from some corner, perhaps from below–“frog perspectives,” as it were, to borrow an expression current among painters. In spite of all the value which may belong to the true, the positive, and the unselfish, it might be possible that a higher and more fundamental value for life generally should be assigned to pretence, to the will to delusion, to selfishness, and cupidity. It might even be possible that WHAT constitutes the value of those good and respected things, consists precisely in their being insidiously related, knotted, and crocheted to these evil and apparently opposed things–perhaps even in being essentially identical with them. Perhaps! But who wishes to concern himself with such dangerous “Perhapses”! For that investigation one must await the advent of a new order of philosophers, such as will have other tastes and inclinations, the reverse of those hitherto prevalent–philosophers of the dangerous “Perhaps” in every sense of the term. And to speak in all seriousness, I see such new philosophers beginning to appear.

Having kept a sharp eye on philosophers, and having read between their lines long enough, I now say to myself that the greater part of conscious thinking must be counted among the instinctive functions, and it is so even in the case of philosophical thinking; one has here to learn anew, as one learned anew about heredity and “innateness.” As little as the act of birth comes into consideration in the whole process and procedure of heredity, just as little is “being-conscious” OPPOSED to the instinctive in any decisive sense; the greater part of the conscious thinking of a philosopher is secretly influenced by his instincts, and forced into definite channels.