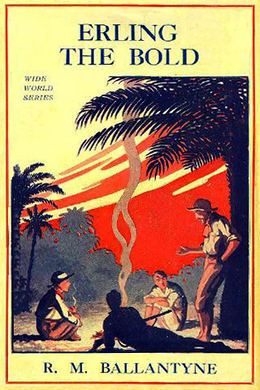 A Tale of the Norse Sea-Kings

This is a tale of a Sea-rover, or Viking as they’re called. In the author’s own words: The present tale is founded chiefly on the information conveyed in that most interesting work by Snorro Sturleson ‘The Heimskringla, or Chronicles of the Kings of Norway.’ It is translated from the Icelandic. On perceiving the intention of the Danes to attack him, Erling’s heart was glad, because he now felt sure that to some extent he had them in his power. If they had, on his first appearance, taken to their ships, they might have easily escaped, or some of the smaller vessels might have pulled up the river and attacked his ship, which, in that case, would have had to meet them on unequal terms; but, now that they were about to attack him on land, he knew that he could keep them in play as long as he pleased, and that if they should, on the appearance of reinforcements, again make for their ships, he could effectively harass them, and retard their embarkation.

By the early light of a bright summer morning, long, long ago, two small boats were seen to issue from one of the fiords or firths on the west coast of Norway, and row towards the skerries or low rocky islets that lay about a mile distant from the mainland.

Although the morning was young, the sun was already high in the heavens, and brought out in glowing colours the varied characteristics of a mountain scene of unrivalled grandeur.

The two shallops moved swiftly towards the islands, their oars shivering the liquid mirror of the sea, and producing almost the only sound that disturbed the universal stillness, for at that early hour Nature herself seemed buried in deep repose. A silvery mist hung over the water, through which the innumerable rocks and islands assumed fantastic shapes, and the more distant among them appeared as though they floated in air. A few seagulls rose startled from their nests, and sailed upwards with plaintive cries, as the keels of the boats grated on the rocks, and the men stepped out and hauled them up on the beach of one of the islets.

A wild uncouth crew were those Norsemen of old! All were armed, for in their days the power and the means of self-defence were absolutely necessary to self-preservation.

Most of them wore portions of scale armour, or shirts of ring mail, and headpieces of steel, though a few among them appeared to have confidence in the protection afforded by the thick hide of the wolf, which, converted into rude, yet not ungraceful, garments, covered their broad shoulders. All, without exception, carried sword or battle-axe and shield. They were goodly stalwart men every one, but silent and stern.

It might have been observed that the two boats, although bound for the same islet, did not row in company. They were beached as far from each other as the little bay into which they ran would admit of, and the crews stood aloof in two distinct groups.

In the centre of each group stood a man who, from his aspect and bearing, appeared to be superior to his fellows. One was in the prime of life, dark and grave; the other in the first flush of manhood, full grown, though beardless, fair, and ruddy. Both were taller and stouter than their comrades.

The two men had met there to fight, and the cause of their feud was– Love!

Both loved a fair Norse maiden in Horlingdal. The father of the maid favoured the elder warrior; the maid herself preferred the younger.

In those days, barbarous though they undoubtedly were, law and justice were more respected and more frequently appealed to in Norway than in almost any other country. Liberty, crushed elsewhere under the deadweight of feudalism, found a home in the bleak North, and a rough but loving welcome from the piratical, sea-roving! She did not, indeed, dwell altogether scathless among her demi-savage guardians, who, if their perceptions of right and wrong were somewhat confused, might have urged in excuse that their light was small. She received many shocks and frequent insults from individuals, but liberty was sincerely loved and fondly cherished by the body of the Norwegian people, through all the period of those dark ages during which other nations scarce dared to mention her name.

Nevertheless, it was sometimes deemed more convenient to settle disputes by the summary method of an appeal to arms than to await the issue of a tedious and uncertain lawsuit such an appeal being perfectly competent to those who preferred it, and the belief being strong among the fiery spirits of the age that Odin, the god of war, would assuredly give victory to the right.

In the present instance it was not considered any infringement of the law of liberty that the issue of the combat would be the disposal of a fair woman’s hand, with or without her heart. Then, as now, women were often forced to marry against their will.

Having gone to that island to fight–an island being a naturally circumscribed battlefield whose limits could not conveniently be transgressed–the two champions set to work at once with the cool businesslike promptitude of men sprung from a warlike race, and nurtured from their birth in the midst of war’s alarms.

Together, and without speaking, they ascended the rock, which was low and almost barren, with a small extent of turf in the centre, level, and admirably suited to their purpose. Here they faced each other; the one drew his sword, the other raised his battle-axe.

There was no sentiment in that combat. The times and the men were extremely matter-of-fact. The act of slaying gracefully had not yet been acquired; yet there was much of manly grace displayed as each threw himself into the position that nature and experience had taught him was best suited to the wielding of his peculiar weapon.