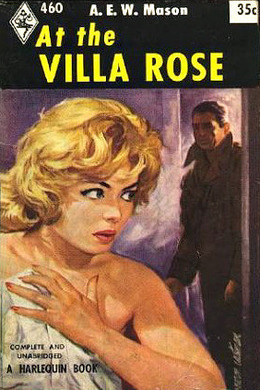 At the Villa Rose

In this thriller by A.E.W. Mason, Inspector Hanaud goes to the Villa Rose, where a wealthy widow has been cruelly murdered for her jewels. At the Villa Rose is Mason and his cunning detective ‘Hanaud’ at their best. Missing jewels; high adventure some one hundred and fifty kilometres from Geneva; a casino and blind love are all factors in a difficult case for Hanaud, which ultimately involves a gang of frightened murderers.

It was Mr. Ricardo’s habit as soon as the second week of August came round to travel to Aix-les-Bains, in Savoy, where for five or six weeks he lived pleasantly. He pretended to take the waters in the morning, he went for a ride in his motor-car in the afternoon, he dined at the Cercle in the evening, and spent an hour or two afterwards in the baccarat-rooms at the Villa des Fleurs. An enviable, smooth life without a doubt, and it is certain that his acquaintances envied him. At the same time, however, they laughed at him and, alas with some justice; for he was an exaggerated person. He was to be construed in the comparative. Everything in his life was a trifle overdone, from the fastidious arrangement of his neckties to the feminine nicety of his little dinner-parties. In age Mr. Ricardo was approaching the fifties; in condition he was a widower–a state greatly to his liking, for he avoided at once the irksomeness of marriage and the reproaches justly levelled at the bachelor; finally, he was rich, having amassed a fortune in Mincing Lane, which he had invested in profitable securities.

Ten years of ease, however, had not altogether obliterated in him the business look. Though he lounged from January to December, he lounged with the air of a financier taking a holiday; and when he visited, as he frequently did, the studio of a painter, a stranger would have hesitated to decide whether he had been drawn thither by a love of art or by the possibility of an investment. His “acquaintances” have been mentioned, and the word is suitable. For while he mingled in many circles, he stood aloof from all. He affected the company of artists, by whom he was regarded as one ambitious to become a connoisseur; and amongst the younger business men, who had never dealt with him, he earned the disrespect reserved for the dilettante. If he had a grief, it was that he had discovered no great man who in return for practical favours would engrave his memory in brass. He was a Maecenas without a Horace, an Earl of Southampton without a Shakespeare. In a word, Aix-les-Bains in the season was the very place for him; and never for a moment did it occur to him that he was here to be dipped in agitations, and hurried from excitement to excitement. The beauty of the little town, the crowd of well-dressed and agreeable people, the rose-coloured life of the place, all made their appeal to him. But it was the Villa des Fleurs which brought him to Aix. Not that he played for anything more than an occasional louis; nor, on the other hand, was he merely a cold looker-on. He had a bank-note or two in his pocket on most evenings at the service of the victims of the tables. But the pleasure to his curious and dilettante mind lay in the spectacle of the battle which was waged night after night between raw nature and good manners. It was extraordinary to him how constantly manners prevailed. There were, however, exceptions.

For instance. On the first evening of this particular visit he found the rooms hot, and sauntered out into the little semicircular garden at the back. He sat there for half an hour under a flawless sky of stars watching the people come and go in the light of the electric lamps, and appreciating the gowns and jewels of the women with the eye of a connoisseur; and then into this starlit quiet there came suddenly a flash of vivid life. A girl in a soft, clinging frock of white satin darted swiftly from the rooms and flung herself nervously upon a bench. She could not, to Ricardo’s thinking, be more than twenty years of age. She was certainly quite young. The supple slenderness of her figure proved it, and he had moreover caught a glimpse, as she rushed out, of a fresh and very pretty face; but he had lost sight of it now. For the girl wore a big black satin hat with a broad brim, from which a couple of white ostrich feathers curved over at the back, and in the shadow of that hat her face was masked. All that he could see was a pair of long diamond eardrops, which sparkled and trembled as she moved her head–and that she did constantly. Now she stared moodily at the ground; now she flung herself back; then she twisted nervously to the right, and then a moment afterwards to the left; and then again she stared in front of her, swinging a satin slipper backwards and forwards against the pavement with the petulance of a child. All her movements were spasmodic; she was on the verge of hysteria. Ricardo was expecting her to burst into tears, when she sprang up and as swiftly as she had come she hurried back into the rooms. “Summer lightning,” thought Mr. Ricardo.

Near to him a woman sneered, and a man said, pityingly: “She was pretty, that little one. It is regrettable that she has lost.”