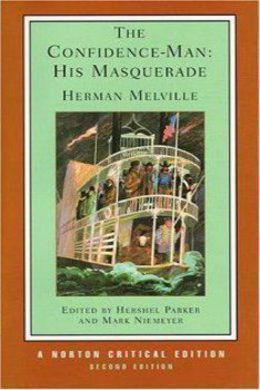 Long considered Melville’s strangest novel, The Confidence-Man is a comic allegory aimed at the optimism and materialism of mid-nineteenth century America. A shape-shifting Confidence-Man approaches passengers on a Mississippi River steamboat and, winning over his not-quite-innocent victims with his charms, urges each to trust in the cosmos, in nature, and even in human nature–with predictable results. In Melville’s time the book was such a failure he abandoned fiction writing for twenty years; only in the twentieth century did critics celebrate its technical virtuosity, wit, comprehensive social vision, and wry scepticism.

At sunrise on a first of April, there appeared, suddenly as Manco Capac at the lake Titicaca, a man in cream-colors, at the water-side in the city of St. Louis.

His cheek was fair, his chin downy, his hair flaxen, his hat a white fur one, with a long fleecy nap. He had neither trunk, valise, carpet-bag, nor parcel. No porter followed him. He was unaccompanied by friends. From the shrugged shoulders, titters, whispers, wonderings of the crowd, it was plain that he was, in the extremest sense of the word, a stranger.

In the same moment with his advent, he stepped aboard the favorite steamer Fidèle, on the point of starting for New Orleans. Stared at, but unsaluted, with the air of one neither courting nor shunning regard, but evenly pursuing the path of duty, lead it through solitudes or cities, he held on his way along the lower deck until he chanced to come to a placard nigh the captain’s office, offering a reward for the capture of a mysterious impostor, supposed to have recently arrived from the East; quite an original genius in his vocation, as would appear, though wherein his originality consisted was not clearly given; but what purported to be a careful description of his person followed.

As if it had been a theatre-bill, crowds were gathered about the announcement, and among them certain chevaliers, whose eyes, it was plain, were on the capitals, or, at least, earnestly seeking sight of them from behind intervening coats; but as for their fingers, they were enveloped in some myth; though, during a chance interval, one of these chevaliers somewhat showed his hand in purchasing from another chevalier, ex-officio a peddler of money-belts, one of his popular safe-guards, while another peddler, who was still another versatile chevalier, hawked, in the thick of the throng, the lives of Measan, the bandit of Ohio, Murrel, the pirate of the Mississippi, and the brothers Harpe, the Thugs of the Green River country, in Kentucky–creatures, with others of the sort, one and all exterminated at the time, and for the most part, like the hunted generations of wolves in the same regions, leaving comparatively few successors; which would seem cause for unalloyed gratulation, and is such to all except those who think that in new countries, where the wolves are killed off, the foxes increase.

Pausing at this spot, the stranger so far succeeded in threading his way, as at last to plant himself just beside the placard, when, producing a small slate and tracing some words upon if, he held it up before him on a level with the placard, so that they who read the one might read the other. The words were these:–

As, in gaining his place, some little perseverance, not to say persistence, of a mildly inoffensive sort, had been unavoidable, it was not with the best relish that the crowd regarded his apparent intrusion; and upon a more attentive survey, perceiving no badge of authority about him, but rather something quite the contrary–he being of an aspect so singularly innocent; an aspect too, which they took to be somehow inappropriate to the time and place, and inclining to the notion that his writing was of much the same sort: in short, taking him for some strange kind of simpleton, harmless enough, would he keep to himself, but not wholly unobnoxious as an intruder–they made no scruple to jostle him aside; while one, less kind than the rest, or more of a wag, by an unobserved stroke, dexterously flattened down his fleecy hat upon his head. Without readjusting it, the stranger quietly turned, and writing anew upon the slate, again held it up:–

“Charity suffereth long, and is kind.”

Illy pleased with his pertinacity, as they thought it, the crowd a second time thrust him aside, and not without epithets and some buffets, all of which were unresented. But, as if at last despairing of so difficult an adventure, wherein one, apparently a non-resistant, sought to impose his presence upon fighting characters, the stranger now moved slowly away, yet not before altering his writing to this:–

Shield-like bearing his slate before him, amid stares and jeers he moved slowly up and down, at his turning points again changing his inscription to–

The word charity, as originally traced, remained throughout uneffaced, not unlike the left-hand numeral of a printed date, otherwise left for convenience in blank.