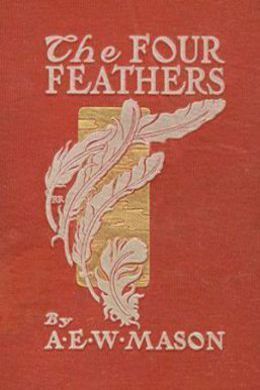 English officer and gentleman Harry Feversham has wealth, social position, a beautiful fiancée, Ethne Eustace, and a brotherly bond with three close friends. But he also harbors a dark secret. Though he is expected to continue his family’s proud tradition of military service, he cannot forget the shameful stories he heard as a child: tales of men who shirked their duty and disgraced themselves in battle. Fearing he too will flee from combat, Harry resigns his commission when his regiment is ordered to the war-torn Sudan. Following this decision, he receives a white feather—symbolizing cowardice—from each of his friends, and a fourth from Ethne. To redeem himself in their eyes, and his own, he embarks on an epic quest, traveling alone to Africa disguised as an Arab. As Harry endures desert heat, raging enemies, and the hellish prison known as the House of Stone, his heroic exploits become the stuff of legend. Originally published in 1902, The Four Feathers, A. E. W. Mason’s best-known novel of adventure and romance, explores a plethora of complex moral issues within a framework of exotic intrigue and breakneck action. What is courage? What is cowardice? What is loyalty? And how do we balance the conflicting demands of country, family, friends, lovers, and one’s own ideals?

Lieutenant Sutch was the first of General Feversham’s guests to reach Broad Place. He arrived about five o’clock on an afternoon of sunshine in mid June, and the old red-brick house, lodged on a southern slope of the Surrey hills, was glowing from a dark forest depth of pines with the warmth of a rare jewel. Lieutenant Sutch limped across the hall, where the portraits of the Fevershams rose one above the other to the ceiling, and went out on to the stone-flagged terrace at the back. There he found his host sitting erect like a boy, and gazing southward toward the Sussex Downs.

“How’s the leg?” asked General Feversham, as he rose briskly from his chair. He was a small wiry man, and, in spite of his white hairs, alert. But the alertness was of the body. A bony face, with a high narrow forehead and steel-blue inexpressive eyes, suggested a barrenness of mind.

“It gave me trouble during the winter,” replied Sutch. “But that was to be expected.” General Feversham nodded, and for a little while both men were silent. From the terrace the ground fell steeply to a wide level plain of brown earth and emerald fields and dark clumps of trees. From this plain voices rose through the sunshine, small but very clear. Far away toward Horsham a coil of white smoke from a train snaked rapidly in and out amongst the trees; and on the horizon rose the Downs, patched with white chalk.

“I thought that I should find you here,” said Sutch.

“It was my wife’s favourite corner,” answered Feversham in a quite emotionless voice. “She would sit here by the hour. She had a queer liking for wide and empty spaces.”

“Yes,” said Sutch. “She had imagination. Her thoughts could people them.”

General Feversham glanced at his companion as though he hardly understood. But he asked no questions. What he did not understand he habitually let slip from his mind as not worth comprehension. He spoke at once upon a different topic.

“There will be a leaf out of our table to-night.”

“Yes. Collins, Barberton, and Vaughan went this winter. Well, we are all permanently shelved upon the world’s half-pay list as it is. The obituary column is just the last formality which gazettes us out of the service altogether,” and Sutch stretched out and eased his crippled leg, which fourteen years ago that day had been crushed and twisted in the fall of a scaling-ladder.

“I am glad that you came before the others,” continued Feversham. “I would like to take your opinion. This day is more to me than the anniversary of our attack upon the Redan. At the very moment when we were standing under arms in the dark–”

“To the west of the quarries; I remember,” interrupted Sutch, with a deep breath. “How should one forget?”

“At that very moment Harry was born in this house. I thought, therefore, that if you did not object, he might join us to-night. He happens to be at home. He will, of course, enter the service, and he might learn something, perhaps, which afterward will be of use–one never knows.”

“By all means,” said Sutch, with alacrity. For since his visits to General Feversham were limited to the occasion of these anniversary dinners, he had never yet seen Harry Feversham.

Sutch had for many years been puzzled as to the qualities in General Feversham which had attracted Muriel Graham, a woman as remarkable for the refinement of her intellect as for the beauty of her person; and he could never find an explanation. He had to be content with his knowledge that for some mysterious reason she had married this man so much older than herself and so unlike to her in character. Personal courage and an indomitable self-confidence were the chief, indeed the only, qualities which sprang to light in General Feversham. Lieutenant Sutch went back in thought over twenty years, as he sat on his garden-chair, to a time before he had taken part, as an officer of the Naval Brigade, in that unsuccessful onslaught on the Redan. He remembered a season in London to which he had come fresh from the China station; and he was curious to see Harry Feversham. He did not admit that it was more than the natural curiosity of a man who, disabled in comparative youth, had made a hobby out of the study of human nature. He was interested to see whether the lad took after his mother or his father–that was all.

So that night Harry Feversham took a place at the dinner-table and listened to the stories which his elders told, while Lieutenant Sutch watched him. The stories were all of that dark winter in the Crimea, and a fresh story was always in the telling before its predecessor was ended. They were stories of death, of hazardous exploits, of the pinch of famine, and the chill of snow.