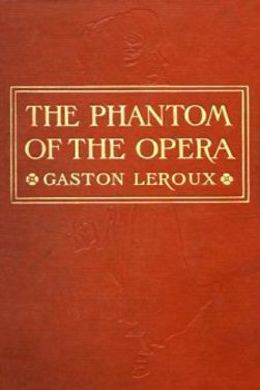 The Phantom of the Opera

The lights dim at the Paris Opera House. The exquisite Christine Daae enraptures the audience with her mellifluous voice. Immediately, Raoul de Chagny falls deeply in love. But the legend of the disfigured “opera ghost” haunts the performance, and as Raoul begins his pursuit of Christine, he is pulled into the depths of the opera house, and into the depths of human emotions. Soon Raoul discovers that the ghost is real and that he wields a terrifying power over Christine–a power as unimaginable as the ghost’s masked face. As Raoul and the ghost vie for Christine’s love, a journey begins into the dark recesses of the human heart, where desire, vulnerability, fear, and violence unravel in a tragic confrontation.

It was the evening on which MM. Debienne and Poligny, the managers of the Opera, were giving a last gala performance to mark their retirement. Suddenly the dressing-room of La Sorelli, one of the principal dancers, was invaded by half-a-dozen young ladies of the ballet, who had come up from the stage after “dancing” Polyeucte. They rushed in amid great confusion, some giving vent to forced and unnatural laughter, others to cries of terror. Sorelli, who wished to be alone for a moment to “run through” the speech which she was to make to the resigning managers, looked around angrily at the mad and tumultuous crowd. It was little Jammes–the girl with the tip-tilted nose, the forget-me-not eyes, the rose-red cheeks and the lily-white neck and shoulders–who gave the explanation in a trembling voice:

“It’s the ghost!” And she locked the door.

Sorelli’s dressing-room was fitted up with official, commonplace elegance. A pier-glass, a sofa, a dressing-table and a cupboard or two provided the necessary furniture. On the walls hung a few engravings, relics of the mother, who had known the glories of the old Opera in the Rue le Peletier; portraits of Vestris, Gardel, Dupont, Bigottini. But the room seemed a palace to the brats of the corps de ballet, who were lodged in common dressing-rooms where they spent their time singing, quarreling, smacking the dressers and hair-dressers and buying one another glasses of cassis, beer, or even rhum, until the call-boy’s bell rang.

Sorelli was very superstitious. She shuddered when she heard little Jammes speak of the ghost, called her a “silly little fool” and then, as she was the first to believe in ghosts in general, and the Opera ghost in particular, at once asked for details:

“Have you seen him?”

“As plainly as I see you now!” said little Jammes, whose legs were giving way beneath her, and she dropped with a moan into a chair.

And they all began to talk together. The ghost had appeared to them in the shape of a gentleman in dress-clothes, who had suddenly stood before them in the passage, without their knowing where he came from. He seemed to have come straight through the wall.

“Pooh!” said one of them, who had more or less kept her head. “You see the ghost everywhere!”

And it was true. For several months, there had been nothing discussed at the Opera but this ghost in dress-clothes who stalked about the building, from top to bottom, like a shadow, who spoke to nobody, to whom nobody dared speak and who vanished as soon as he was seen, no one knowing how or where. As became a real ghost, he made no noise in walking. People began by laughing and making fun of this specter dressed like a man of fashion or an undertaker; but the ghost legend soon swelled to enormous proportions among the corps de ballet. All the girls pretended to have met this supernatural being more or less often. And those who laughed the loudest were not the most at ease. When he did not show himself, he betrayed his presence or his passing by accident, comic or serious, for which the general superstition held him responsible. Had any one met with a fall, or suffered a practical joke at the hands of one of the other girls, or lost a powderpuff, it was at once the fault of the ghost, of the Opera ghost.

After all, who had seen him? You meet so many men in dress-clothes at the Opera who are not ghosts. But this dress-suit had a peculiarity of its own. It covered a skeleton. At least, so the ballet-girls said. And, of course, it had a death’s head.

Was all this serious? The truth is that the idea of the skeleton came from the description of the ghost given by Joseph Buquet, the chief scene-shifter, who had really seen the ghost. He had run up against the ghost on the little staircase, by the footlights, which leads to “the cellars.” He had seen him for a second–for the ghost had fled–and to any one who cared to listen to him he said:

“He is extraordinarily thin and his dress-coat hangs on a skeleton frame. His eyes are so deep that you can hardly see the fixed pupils. You just see two big black holes, as in a dead man’s skull. His skin, which is stretched across his bones like a drumhead, is not white, but a nasty yellow. His nose is so little worth talking about that you can’t see it side-face; and THE ABSENCE of that nose is a horrible thing TO LOOK AT. All the hair he has is three or four long dark locks on his forehead and behind his ears.”