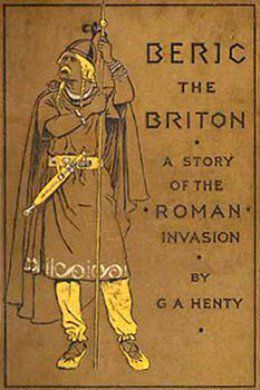 A Story of the Roman Invasion

The invasion of Britain by the Roman legionaries is the setting for this story. Beric, a boy-chief of a British tribe, takes a prominent part in the insurrection against Rome under Boadicea. These efforts are useless against the might Roman army. For a short time, Beric and his companions continue the fight but are ultimately defeated and taken prisoners to Rome. Through the eyes of Beric, the reader will learn of life in Rome, the gladitorial schools, the great fire and life in Nero’s court. This classic work by the masterful hand of G. A. Henty will shed light upon an event much neglected in history today.

“It may be a fair sight in a Roman’s eyes, Beric, but nought could be fouler to those of a Briton. To me every one of those blocks of brick and stone weighs down and helps to hold in bondage this land of ours; while that temple they have dared to rear to their gods, in celebration of their having conquered Britain, is an insult and a lie. We are not conquered yet, as they will some day know to their cost. We are silent, we wait, but we do not admit that we are conquered.”

“I agree with you there. We have never fairly tried our strength against them. These wretched divisions have always prevented our making an effort to gather; Cassivelaunus and some of the Kentish tribes alone opposed them at their first landing, and he was betrayed and abandoned by the tribes on the north of the Thames. It has been the same thing ever since. We fight piecemeal; and while the Romans hurl their whole strength against one tribe the others look on with folded hands. Who aided the Trinobantes when the Romans defeated them and established themselves on that hill? No one. They will eat Britain up bit by bit.”

“Then you like them no better for having lived among them, Beric?”

“I like them more, but I fear them more. One cannot be four years among them, as I was, without seeing that in many respects we might copy them with advantage. They are a great people. Compare their splendid mansions and their regular orderly life, their manners and their ways, with our rough huts, and our feasts, ending as often as not with quarrels and brawls. Look at their arts, their power of turning stone into lifelike figures, and above all, the way in which they can transfer their thoughts to white leaves, so that others, many many years hence, can read them and know all that was passing, and what men thought and did in the long bygone. Truly it is marvellous.”

“You are half Romanized, Beric,” his companion said roughly.

“I think not,” the other said quietly; “I should be worse than a fool had I lived, as I have done, a hostage among them for four years without seeing that there is much to admire, much that we could imitate with advantage, in their life and ways; but there is no reason because they are wiser and far more polished, and in many respects a greater people than we, that they should come here to be our masters. These things are desirable, but they are as nothing to freedom. I have said that I like them more for being among them. I like them more for many reasons. They are grave and courteous in their manner to each other; they obey their own laws; every man has his rights; and while all yield obedience to their superiors, the superiors respect the rights of those below them. The highest among them cannot touch the property or the life of the lowest in rank. All this seems to me excellent; but then, on the other hand, my blood boils in my veins at the contempt in which they hold us; at their greed, their rapacity, their brutality, their denial to us of all rights. In their eyes we are but savages, but wild men, who may be useful for tilling the ground for them, but who, if troublesome, should be hunted down and slain like wild beasts. I admire them for what they can do; I respect them for their power and learning; but I hate them as our oppressors.”

“That is better, Beric, much better. I had begun to fear that the grand houses and the splendour of these Romans might have sapped your patriotism. I hate them all; I hate changes; I would live as we have always lived.”

“But you forget, Boduoc, that we ourselves have not been standing still. Though our long past forefathers, when they crossed from Gaul wave after wave, were rude warriors, we have been learning ever since from Gaul as the Gauls have learned from the Romans, and the Romans themselves admit that we have advanced greatly since the days when, under their Caesar, they first landed here. Look at the town on the hill there. Though ‘tis Roman now ‘tis not changed so much from what it was under that great king Cunobeline, while his people had knowledge of many things of which we and the other tribes of the Iceni knew nothing.”

“What good did it do them?” the other asked scornfully; “they lie prostrate under the Roman yoke. It was easy to destroy their towns while we, who have few towns to destroy, live comparatively free. Look across at Camalodunum, Cunobeline’s capital. Where are the men who built the houses, who dressed in soft garments, who aped the Romans, and who regarded us as well nigh savage men? Gone every one of them; hewn down on their own hearthstones, or thrust out with their wives and families to wander homeless–is there one left of them in yonder town? Their houses they were so proud of, their cultivated fields, their wealth of all kinds has been seized by the Romans.