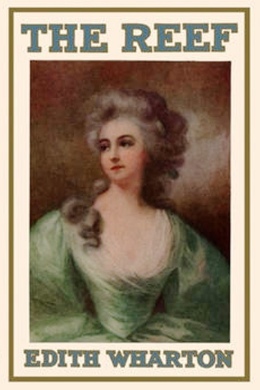 Set in and around London, The Reef is a story of complex morality and its intricately woven place in society. This narrative primarily follows George Darrow and Anna Leath, a young gentleman and a widowed lady who plan to marry. Both of them experience doubts about their union, with surprising outcomes. Darrow has a brief liaison with the delicate, generous Sophy Viner, a kind woman of the working class. She later meets Anna’s stepson Owen Leath, who wishes to upset social conventions and marry her. When Anna’s discovers the intimate history of Darrow and Sophy, she worries about her stepson’s affections and feels concerned about the alliance she herself is about to create. Wharton’s talent for balancing emotional turmoil and all the social manners of her time is blended into this philosophical work that explores the metaphorical reefs in the hearts of women.

All the way from Charing Cross to Dover the train had hammered the words of the telegram into George Darrow’s ears, ringing every change of irony on its commonplace syllables: rattling them out like a discharge of musketry, letting them, one by one, drip slowly and coldly into his brain, or shaking, tossing, transposing them like the dice in some game of the gods of malice; and now, as he emerged from his compartment at the pier, and stood facing the wind-swept platform and the angry sea beyond, they leapt out at him as if from the crest of the waves, stung and blinded him with a fresh fury of derision.

She had put him off at the very last moment, and for the second time: put him off with all her sweet reasonableness, and for one of her usual “good” reasons–he was certain that this reason, like the other, (the visit of her husband’s uncle’s widow) would be “good”! But it was that very certainty which chilled him. The fact of her dealing so reasonably with their case shed an ironic light on the idea that there had been any exceptional warmth in the greeting she had given him after their twelve years apart.

They had found each other again, in London, some three months previously, at a dinner at the American Embassy, and when she had caught sight of him her smile had been like a red rose pinned on her widow’s mourning. He still felt the throb of surprise with which, among the stereotyped faces of the season’s diners, he had come upon her unexpected face, with the dark hair banded above grave eyes; eyes in which he had recognized every little curve and shadow as he would have recognized, after half a life-time, the details of a room he had played in as a child. And as, in the plumed starred crowd, she had stood out for him, slender, secluded and different, so he had felt, the instant their glances met, that he as sharply detached himself for her. All that and more her smile had said; had said not merely “I remember,” but “I remember just what you remember”; almost, indeed, as though her memory had aided his, her glance flung back on their recaptured moment its morning brightness. Certainly, when their distracted Ambassadress–with the cry: “Oh, you know Mrs. Leath? That’s perfect, for General Farnham has failed me”–had waved them together for the march to the dining-room, Darrow had felt a slight pressure of the arm on his, a pressure faintly but unmistakably emphasizing the exclamation: “Isn’t it wonderful?–In London–in the season–in a mob?”

Little enough, on the part of most women; but it was a sign of Mrs. Leath’s quality that every movement, every syllable, told with her. Even in the old days, as an intent grave-eyed girl, she had seldom misplaced her light strokes; and Darrow, on meeting her again, had immediately felt how much finer and surer an instrument of expression she had become.

Their evening together had been a long confirmation of this feeling. She had talked to him, shyly yet frankly, of what had happened to her during the years when they had so strangely failed to meet. She had told him of her marriage to Fraser Leath, and of her subsequent life in France, where her husband’s mother, left a widow in his youth, had been re-married to the Marquis de Chantelle, and where, partly in consequence of this second union, the son had permanently settled himself. She had spoken also, with an intense eagerness of affection, of her little girl Effie, who was now nine years old, and, in a strain hardly less tender, of Owen Leath, the charming clever young stepson whom her husband’s death had left to her care…

A porter, stumbling against Darrow’s bags, roused him to the fact that he still obstructed the platform, inert and encumbering as his luggage.

Was he crossing? He really didn’t know; but for lack of any more compelling impulse he followed the porter to the luggage van, singled out his property, and turned to march behind it down the gang-way. As the fierce wind shouldered him, building up a crystal wall against his efforts, he felt anew the derision of his case.

“Nasty weather to cross, sir,” the porter threw back at him as they beat their way down the narrow walk to the pier. Nasty weather, indeed; but luckily, as it had turned out, there was no earthly reason why Darrow should cross.

While he pushed on in the wake of his luggage his thoughts slipped back into the old groove. He had once or twice run across the man whom Anna Summers had preferred to him, and since he had met her again he had been exercising his imagination on the picture of what her married life must have been. Her husband had struck him as a characteristic specimen of the kind of American as to whom one is not quite clear whether he lives in Europe in order to cultivate an art, or cultivates an art as a pretext for living in Europe.