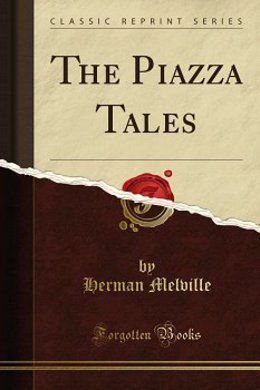 The Piazza Tales were written upon the public indignation over his novel Pierre, which had forced Melville to retire to the piazza of his house in Lenox, Massachusetts. The six tales included here are among Melville’s most notable writings. They include the famed tale “Bartleby” a story of slavery, “Benito Cereno,” “The Encantadas,” “The Lightning-Rod Man,” “The Bell-Tower,” and the title story, “The Piazza.”

When I removed into the country, it was to occupy an old-fashioned farm-house, which had no piazza–a deficiency the more regretted, because not only did I like piazzas, as somehow combining the coziness of in-doors with the freedom of out-doors, and it is so pleasant to inspect your thermometer there, but the country round about was such a picture, that in berry time no boy climbs hill or crosses vale without coming upon easels planted in every nook, and sun-burnt painters painting there. A very paradise of painters. The circle of the stars cut by the circle of the mountains. At least, so looks it from the house; though, once upon the mountains, no circle of them can you see. Had the site been chosen five rods off, this charmed ring would not have been.

The house is old. Seventy years since, from the heart of the Hearth Stone Hills, they quarried the Kaaba, or Holy Stone, to which, each Thanksgiving, the social pilgrims used to come. So long ago, that, in digging for the foundation, the workmen used both spade and axe, fighting the Troglodytes of those subterranean parts–sturdy roots of a sturdy wood, encamped upon what is now a long land-slide of sleeping meadow, sloping away off from my poppy-bed. Of that knit wood, but one survivor stands–an elm, lonely through steadfastness.

Whoever built the house, he builded better than he knew; or else Orion in the zenith flashed down his Damocles’ sword to him some starry night, and said, “Build there.” For how, otherwise, could it have entered the builder’s mind, that, upon the clearing being made, such a purple prospect would be his?–nothing less than Greylock, with all his hills about him, like Charlemagne among his peers.

Now, for a house, so situated in such a country, to have no piazza for the convenience of those who might desire to feast upon the view, and take their time and ease about it, seemed as much of an omission as if a picture-gallery should have no bench; for what but picture-galleries are the marble halls of these same limestone hills?–galleries hung, month after month anew, with pictures ever fading into pictures ever fresh. And beauty is like piety–you cannot run and read it; tranquillity and constancy, with, now-a-days, an easy chair, are needed. For though, of old, when reverence was in vogue, and indolence was not, the devotees of Nature, doubtless, used to stand and adore–just as, in the cathedrals of those ages, the worshipers of a higher Power did–yet, in these times of failing faith and feeble knees, we have the piazza and the pew.

During the first year of my residence, the more leisurely to witness the coronation of Charlemagne (weather permitting, they crown him every sunrise and sunset), I chose me, on the hill-side bank near by, a royal lounge of turf–a green velvet lounge, with long, moss-padded back; while at the head, strangely enough, there grew (but, I suppose, for heraldry) three tufts of blue violets in a field-argent of wild strawberries; and a trellis, with honeysuckle, I set for canopy. Very majestical lounge, indeed. So much so, that here, as with the reclining majesty of Denmark in his orchard, a sly ear-ache invaded me. But, if damps abound at times in Westminster Abbey, because it is so old, why not within this monastery of mountains, which is older?

A piazza must be had.

The house was wide–my fortune narrow; so that, to build a panoramic piazza, one round and round, it could not be–although, indeed, considering the matter by rule and square, the carpenters, in the kindest way, were anxious to gratify my furthest wishes, at I’ve forgotten how much a foot.

Upon but one of the four sides would prudence grant me what I wanted. Now, which side?

To the east, that long camp of the Hearth Stone Hills, fading far away towards Quito; and every fall, a small white flake of something peering suddenly, of a coolish morning, from the topmost cliff–the season’s new-dropped lamb, its earliest fleece; and then the Christmas dawn, draping those dim highlands with red-barred plaids and tartans–goodly sight from your piazza, that. Goodly sight; but, to the north is Charlemagne–can’t have the Hearth Stone Hills with Charlemagne.

Well, the south side. Apple-trees are there. Pleasant, of a balmy morning, in the month of May, to sit and see that orchard, white-budded, as for a bridal; and, in October, one green arsenal yard; such piles of ruddy shot. Very fine, I grant; but, to the north is Charlemagne.

The west side, look. An upland pasture, alleying away into a maple wood at top. Sweet, in opening spring, to trace upon the hill-side, otherwise gray and bare–to trace, I say, the oldest paths by their streaks of earliest green. Sweet, indeed, I can’t deny; but, to the north is Charlemagne.