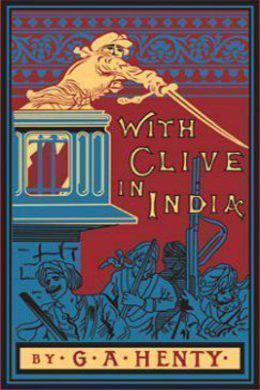 With Clive in India

The Beginnings of an Empire

Henty has taken a period of Indian history of the most vital importance, and he has embroidered on the historical facts a story which of itself is deeply interesting. Young people assuredly will be delighted with the volume.

A lady in deep mourning was sitting, crying bitterly, by a fire in small lodgings in the town of Yarmouth. Beside her stood a tall lad of sixteen. He was slight in build, but his schoolfellows knew that Charlie Marryat’s muscles were as firm and hard as those of any boy in the school. In all sports requiring activity and endurance, rather than weight and strength, he was always conspicuous. Not one in the school could compete with him in long-distance running, and when he was one of the hares there was but little chance for the hounds. He was a capital swimmer, and one of the best boxers in the school. He had a reputation for being a leader in every mischievous prank; but he was honorable and manly, would scorn to shelter himself under the semblance of a lie, and was a prime favourite with his masters, as well as his schoolfellows. His mother bewailed the frequency with which he returned home with blackened eyes and bruised face; for between Dr. Willet’s school and the fisher lads of Yarmouth there was a standing feud, whose origin dated so far back that none of those now at school could trace it. Consequently, fierce fights often took place in the narrow rows, and sometimes the fisher boys would be driven back on to the broad quay shaded by trees, by the river, and there being reinforced from the craft along the side, would reassume the offensive and drive their opponents back into the main street.

It was but six months since Charlie had lost his father, who was the officer in command at the coast guard station, and his scanty pension was now all that remained for the support of his widow and children. His mother had talked his future prospects over, many times, with Charlie. The latter was willing to do anything, but could suggest nothing. His father had but little naval interest, and had for years been employed on coast guard service. Charlie agreed that, although he should have liked of all things to go to sea, it was useless to think of it now, for he was past the age at which he could have entered as a midshipman.

The matter had been talked over four years before, with his father; but the latter had pointed out that a life in the navy, without interest, is in most cases a very hard one. If a chance of distinguishing himself happened, promotion would follow; but if not, he might be for years on shore, starving on half pay and waiting in vain for an appointment, while officers with more luck and better interest went over his head.

Other professions had been discussed, but nothing determined upon, when Lieutenant Marryat suddenly died. Charlie, although an only son, was not an only child, as he had two sisters both younger than himself. After a few months of effort, Mrs. Marryat found that the utmost she could hope to do, with her scanty income, was to maintain herself and daughters, and to educate them until they should reach an age when they could earn their own living as governesses; but that Charlie’s keep and education were beyond her resources. She had, therefore, very reluctantly written to an uncle, whom she had not seen for many years, her family having objected very strongly to her marriage with a penniless lieutenant in the navy. She informed him of the loss of her husband, and that, although her income was sufficient to maintain herself and her daughters, she was most anxious to start her son, who was now sixteen, in life; and therefore begged him to use his influence to obtain for him a situation of some sort. The letter which she now held in her hand was the answer to the appeal.

“My dear Niece,” it began, “Since you, by your own foolish conduct and opposition to all our wishes, separated yourself from your family, and went your own way in life, I have heard little of you, as the death of your parents so shortly afterwards deprived me of all sources of information. I regret to hear of the loss which you have suffered. I have already taken the necessary steps to carry out your wishes. I yesterday dined with a friend, who is one of the directors of the Honorable East India Company, and at my request he has kindly placed a writership in the Company at your son’s service. He will have to come up to London to see the board, next week, and will probably have to embark for India a fortnight later. I shall be glad if he will take up his abode with me, during the intervening time. I shall be glad also if you will favour me with a statement of your income and expenses, with such details as you may think necessary. I inclose four five-pound bank notes, in order that your son may obtain such garments as may be immediately needful for his appearance before the board of directors, and for his journey to London. I remain, my dear niece, yours sincerely,