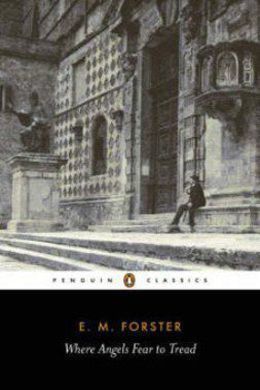 Where Angels Fear to Tread

When attractive, impulsive English widow Lidia takes a holiday in Italy, she causes a scandal by marrying Gino, a dashing and highly unsuitable Italian twelve years her junior. Her prim, snobbish in-laws make no attempts to hide their disapproval, and when Lidia’s decision eventually brings disaster, her English relatives embark on an expedition to face the uncouth foreigner. But when they are confronted by the beauty of Italy and the charm and vitality of the disreputable Gino, they are forced to examine their own narrow lives, and their reactions are emotional, violent and unexpected.

They were all at Charing Cross to see Lilia off—Philip, Harriet, Irma, Mrs. Herriton herself. Even Mrs. Theobald, squired by Mr. Kingcroft, had braved the journey from Yorkshire to bid her only daughter good–bye. Miss Abbott was likewise attended by numerous relatives, and the sight of so many people talking at once and saying such different things caused Lilia to break into ungovernable peals of laughter.

“Quite an ovation,” she cried, sprawling out of her first–class carriage. “They’ll take us for royalty. Oh, Mr. Kingcroft, get us foot–warmers.”

The good–natured young man hurried away, and Philip, taking his place, flooded her with a final stream of advice and injunctions—where to stop, how to learn Italian, when to use mosquito–nets, what pictures to look at. “Remember,” he concluded, “that it is only by going off the track that you get to know the country. See the little towns—Gubbio, Pienza, Cortona, San Gemignano, Monteriano. And don’t, let me beg you, go with that awful tourist idea that Italy’s only a museum of antiquities and art. Love and understand the Italians, for the people are more marvellous than the land.”

“How I wish you were coming, Philip,” she said, flattered at the unwonted notice her brother–in–law was giving her.

“I wish I were.” He could have managed it without great difficulty, for his career at the Bar was not so intense as to prevent occasional holidays. But his family disliked his continual visits to the Continent, and he himself often found pleasure in the idea that he was too busy to leave town.

“Good–bye, dear every one. What a whirl!” She caught sight of her little daughter Irma, and felt that a touch of maternal solemnity was required. “Good–bye, darling. Mind you’re always good, and do what Granny tells you.”

She referred not to her own mother, but to her mother–in–law, Mrs. Herriton, who hated the title of Granny.

Irma lifted a serious face to be kissed, and said cautiously, “I’ll do my best.”

“She is sure to be good,” said Mrs. Herriton, who was standing pensively a little out of the hubbub. But Lilia was already calling to Miss Abbott, a tall, grave, rather nice–looking young lady who was conducting her adieus in a more decorous manner on the platform.

“Caroline, my Caroline! Jump in, or your chaperon will go off without you.”

And Philip, whom the idea of Italy always intoxicated, had started again, telling her of the supreme moments of her coming journey—the Campanile of Airolo, which would burst on her when she emerged from the St. Gothard tunnel, presaging the future; the view of the Ticino and Lago Maggiore as the train climbed the slopes of Monte Cenere; the view of Lugano, the view of Como—Italy gathering thick around her now—the arrival at her first resting–place, when, after long driving through dark and dirty streets, she should at last behold, amid the roar of trams and the glare of arc lamps, the buttresses of the cathedral of Milan.

“Good old Harry!” She kissed every one again, and there was a moment’s silence. They all smiled steadily, excepting Philip, who was choking in the fog, and old Mrs. Theobald, who had begun to cry. Miss Abbott got into the carriage. The guard himself shut the door, and told Lilia that she would be all right. Then the train moved, and they all moved with it a couple of steps, and waved their handkerchiefs, and uttered cheerful little cries. At that moment Mr. Kingcroft reappeared, carrying a footwarmer by both ends, as if it was a tea–tray. He was sorry that he was too late, and called out in a quivering voice, “Good–bye, Mrs. Charles. May you enjoy yourself, and may God bless you.”

Lilia smiled and nodded, and then the absurd position of the foot–warmer overcame her, and she began to laugh again.

“Oh, I am so sorry,” she cried back, “but you do look so funny. Oh, you all look so funny waving! Oh, pray!” And laughing helplessly, she was carried out into the fog.

Mr. Kingcroft solemnly moved his head in token of agreement. “I wish,” said he, “that Mrs. Charles had gotten the footwarmer. These London porters won’t take heed to a country chap.”

Sawston, her own home, was within easy reach of London, and they were not late for tea. Tea was in the dining–room, with an egg for Irma, to keep up the child’s spirits. The house seemed strangely quiet after a fortnight’s bustle, and their conversation was spasmodic and subdued. They wondered whether the travellers had got to Folkestone, whether it would be at all rough, and if so what would happen to poor Miss Abbott.