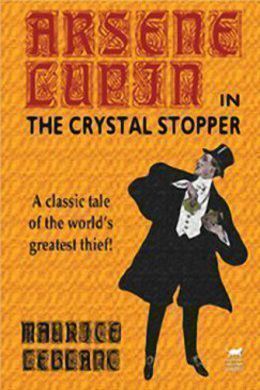 Arsène Lupin may have finally met his match in Deputy Daubrecq, a cunning detective who foils Lupin’s most cunning robberies, thefts, and even a kidnapping. Can the world’s greatest thief get his act together, save his arrested men from the guillotine, and recover his lost honour? A thrilling adventure from the author of Arsène Lupin, Arsène Lupin vs. Herloch Sholmes, and The Hollow Needle! Contents: The Arrests; Eight From Nine Leaves One; The Home Life Of Alexis Daubrecq; The Chief Of The Enemies; The Twenty-seven; The Death-sentence; The Profile Of Napoleon; The Lovers’ Tower; In The Dark; Extra-dry?; The Cross Of Lorraine; The Scaffold; The Last Battle.

The two boats fastened to the little pier that jutted out from the garden lay rocking in its shadow. Here and there lighted windows showed through the thick mist on the margins of the lake. The Enghien Casino opposite blazed with light, though it was late in the season, the end of September. A few stars appeared through the clouds. A light breeze ruffled the surface of the water.

Arsene Lupin left the summer-house where he was smoking a cigar and, bending forward at the end of the pier:

A man rose from each of the boats, and one of them answered:

“Get ready. I hear the car coming with Gilbert and Vaucheray.”

He crossed the garden, walked round a house in process of construction, the scaffolding of which loomed overhead, and cautiously opened the door on the Avenue de Ceinture. He was not mistaken: a bright light flashed round the bend and a large, open motor-car drew up, whence sprang two men in great-coats, with the collars turned up, and caps.

It was Gilbert and Vaucheray: Gilbert, a young fellow of twenty or twenty-two, with an attractive cast of features and a supple and sinewy frame; Vaucheray, older, shorter, with grizzled hair and a pale, sickly face.

“Absolutely. The Villa Marie-Therese is ours to do as we please with.”

The chauffeur had kept his seat. Lupin gave him his orders:

“Don’t wait here. It might attract attention. Be back at half-past nine exactly, in time to load the car unless the whole business falls through.”

“Why should it fall through?” observed Gilbert.

The motor drove away; and Lupin, taking the road to the lake with his two companions, replied:

“Why? Because I didn’t prepare the plan; and, when I don’t do a thing myself, I am only half-confident.”

“Nonsense, governor! I’ve been working with you for three years now… I’m beginning to know the ropes!”

“Yes, my lad, you’re beginning,” said Lupin, “and that’s just why I’m afraid of blunders… Here, get in with me… And you, Vaucheray, take the other boat… That’s it… And now push off, boys… and make as little noise as you can.”

Growler and Masher, the two oarsmen, made straight for the opposite bank, a little to the left of the casino.

They met a boat containing a couple locked in each other’s arms, floating at random, and another in which a number of people were singing at the top of their voices. And that was all.

Lupin shifted closer to his companion and said, under his breath:

“Tell me, Gilbert, did you think of this job, or was it Vaucheray’s idea?”

“Upon my word, I couldn’t tell you: we’ve both of us been discussing it for weeks.”

“The thing is, I don’t trust Vaucheray: he’s a low ruffian when one gets to know him… I can’t make out why I don’t get rid of him…”

“Yes, yes, I mean what I say: he’s a dangerous fellow, to say nothing of the fact that he has some rather serious peccadilloes on his conscience.”

He sat silent for a moment and continued:

“So you’re quite sure that you saw Daubrecq the deputy?”

“Saw him with my own eyes, governor.”

“And you know that he has an appointment in Paris?”

“He’s going to the theatre.”

“Very well; but his servants have remained behind at the Enghien villa….”

“The cook has been sent away. As for the valet, Leonard, who is Daubrecq’s confidential man, he’ll wait for his master in Paris. They can’t get back from town before one o’clock in the morning. But…”

“We must reckon with a possible freak of fancy on Daubrecq’s part, a change of mind, an unexpected return, and so arrange to have everything finished and done with in an hour.”

“And when did you get these details?”

“This morning. Vaucheray and I at once thought that it was a favourable moment. I selected the garden of the unfinished house which we have just left as the best place to start from; for the house is not watched at night. I sent for two mates to row the boats; and I telephoned to you. That’s the whole story.”

“Have you the keys?”

“The keys of the front-door.”

“Is that the villa which I see from here, standing in its own grounds?”

“Yes, the Villa Marie-Therese; and as the two others, with the gardens touching it on either side, have been unoccupied since this day week, we shall be able to remove what we please at our leisure; and I swear to you, governor, it’s well worth while.”

“The job’s much too simple,” mumbled Lupin. “No charm about it!”

They landed in a little creek whence rose a few stone steps, under cover of a mouldering roof. Lupin reflected that shipping the furniture would be easy work. But, suddenly, he said:

“There are people at the villa. Look… a light.”

“It’s a gas-jet, governor. The light’s not moving.”