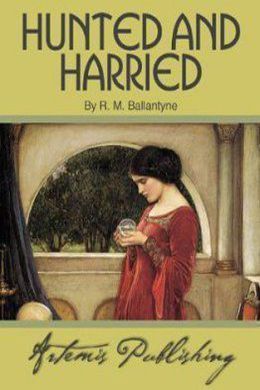 A Tale of the Scottish Covenanters

In the second half of the seventeenth century, the Scottish Kirk was in direct conflict with the King of England. By 1666, the king s soldiers were given lists of the names of the Scottish Covenanters by the curates, who then hunted them down and persecuted them. This is the story of Will Wallace, a young man in the service of the King who is tasked with searching for Andrew Black, a defiant Protestant. But Will soon joins Black as a follower of Christ and becomes one of the hunted and harried himself.

On a brilliant summer morning in the last quarter of the seventeenth century a small troop of horsemen crossed the ford of the river Cairn, in Dumfriesshire, not far from the spot where stands the little church of Irongray, and, gaining the road on the western bank of the stream, wended their way towards the moors and uplands which lie in the neighbourhood of Skeoch Hill.

The dragoons, for such they were, trotted rapidly along the road that led into the solitudes of the hills, with all the careless dash of men whose interests are centred chiefly on the excitements of the passing hour, yet with the unflagging perseverance of those who have a fixed purpose in view—their somewhat worn aspect and the mud with which they were bespattered, from jack–boot to iron headpiece, telling of a long ride over rugged ground.

The officer in command of the party rode a little in advance. Close behind him followed two troopers, one of whom was a burly middle–aged man with a stern, swarthy countenance; the other a youth whose tall frame was scarcely, if at all, less powerful than that of his comrade–in–arms, though much more elegant in form, while his youthful and ruddy, yet masculine, countenance suggested that he must at that time have been but a novice in the art of war.

This youth alone, of all the party, had a somewhat careworn and sad expression on his brow. It could hardly have been the result of fatigue, for there was more of ease and vigour in his carriage than in that of any of his companions.

“We should be near the river by this time, Glendinning,” said the leader of the party, reining in and addressing the swarthy trooper.

“Ay, sir, the Cluden rins jist ayont the turn o’ the road there,” replied the man. “Ye’ll hear the roar o’ the fa’ in a meenit or twa.”

Even as he spoke the dull growl of a cataract was heard, and, a few minutes later, the party came upon the ford of the river.

It was situated not many yards below the picturesque waterfall, which is now spanned by the Routen Bridge, but which, at that time, was unbridged—at all events, if a bridge had previously existed, it had fallen in or been carried away—and the wild gorge was impassable.

The sound of the fall alone told of its vicinity, for a dense mass of foliage hid it completely from the troopers’ view until they had surmounted the steep bank on the other side of the stream.

“Are you well acquainted with this man Black?” asked the leader of the party as they emerged from the thick belt of trees and shrubs by which the Cluden was shaded, and continued their journey on the more open ground beyond.

“I ken him weel, sir,” answered the trooper. “Andrew Black was an auld freend o’ mine, an’ a big, stoot, angry man he is—kindly disposed, nae doot, when ye let him alane, but a perfe’t deevil incarnate when he’s roosed. He did me an ill turn ance that I’ve no paid him off for yet.”

“I suppose, then,” said the officer, “that your guiding us so willingly to his cottage is in part payment of this unsettled debt?”

“Maybe it is,” replied the trooper grimly.

“They say,” continued the other, “that there is some mystery about the man; that somehow nobody can catch him. Like an eel he has slipped through our fellows’ fingers and disappeared more than once, when they thought they had him quite safe. It is said that on one occasion he managed even to give the slip to Claverhouse himself, which, you know, is not easy.”

“That may be, sir, but he’ll no slip through my fingers gin I ance git a grup o’ his thrapple,” said the swarthy man, with a revengeful look.

“We must get a grip of him somehow,” returned the officer, “for it is said that he is a sly helper of the rebels—though it is as difficult to convict as to catch him; and as this gathering, of which our spies have brought information, is to be in the neighbourhood of his house, he is sure to be mixed up with it.”

“Nae doot o’ that, sir, an’ so we may manage to kill twa birds wi’ ae stane. But I’m in a diffeeculty noo, sir, for ye ken I’m no acquaint wi’ this country nae farer than the Cluden ford, an’ here we hae come to a fork i’ the road.”

The party halted as he spoke, while the perplexed guide stroked his rather long nose and looked seriously at the two roads, or bridle–paths, into which their road had resolved itself, and each of which led into very divergent parts of the heathclad hills.

This guide, Glendinning, had become acquainted with Black at a time when the latter resided in Lanarkshire, and, as he had just said, was unacquainted with the region through which they now travelled beyond the river Cluden. After a short conference the officer in command decided to divide the party and explore both paths.

“You will take one man, Glendinning, and proceed along the path to the right,” he said; “I will try the left.”