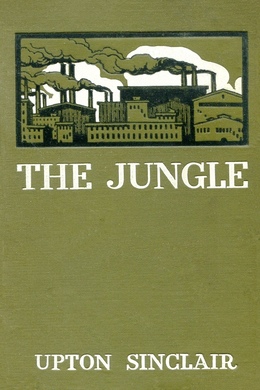 Upton Sinclair’s muckraking masterpiece centers on Jurgis Rudkus, a Lithuanian immigrant working in Chicago’s infamous Packingtown. Instead of finding the American Dream, Rudkus and his family inhabit a brutal, soul-crushing urban jungle dominated by greedy bosses, pitiless con-men, and corrupt politicians. While Sinclair’s main target was the industry’s appalling labor conditions, the reading public was most outraged by the disgusting filth and contamination in American food that his novel exposed. As a result, President Theodore Roosevelt demanded an official investigation, which quickly led to the passage of the Pure Food and Drug laws. For a work of fiction to have such an impact outside its literary context is extremely rare. Today, The Jungle remains a relevant portrait of capitalism at its worst and an impassioned account of the human spirit facing nearly insurmountable challenges.

It was four o’clock when the ceremony was over and the carriages began to arrive. There had been a crowd following all the way, owing to the exuberance of Marija Berczynskas. The occasion rested heavily upon Marija’s broad shoulders–it was her task to see that all things went in due form, and after the best home traditions; and, flying wildly hither and thither, bowling every one out of the way, and scolding and exhorting all day with her tremendous voice, Marija was too eager to see that others conformed to the proprieties to consider them herself. She had left the church last of all, and, desiring to arrive first at the hall, had issued orders to the coachman to drive faster. When that personage had developed a will of his own in the matter, Marija had flung up the window of the carriage, and, leaning out, proceeded to tell him her opinion of him, first in Lithuanian, which he did not understand, and then in Polish, which he did. Having the advantage of her in altitude, the driver had stood his ground and even ventured to attempt to speak; and the result had been a furious altercation, which, continuing all the way down Ashland Avenue, had added a new swarm of urchins to the cortege at each side street for half a mile.

This was unfortunate, for already there was a throng before the door. The music had started up, and half a block away you could hear the dull “broom, broom” of a cello, with the squeaking of two fiddles which vied with each other in intricate and altitudinous gymnastics. Seeing the throng, Marija abandoned precipitately the debate concerning the ancestors of her coachman, and, springing from the moving carriage, plunged in and proceeded to clear a way to the hall. Once within, she turned and began to push the other way, roaring, meantime, “Eik! Eik! Uzdaryk-duris!” in tones which made the orchestral uproar sound like fairy music.

“Z. Graiczunas, Pasilinksminimams darzas. Vynas. Sznapsas. Wines and Liquors. Union Headquarters”–that was the way the signs ran. The reader, who perhaps has never held much converse in the language of far-off Lithuania, will be glad of the explanation that the place was the rear room of a saloon in that part of Chicago known as “back of the yards.” This information is definite and suited to the matter of fact; but how pitifully inadequate it would have seemed to one who understood that it was also the supreme hour of ecstasy in the life of one of God’s gentlest creatures, the scene of the wedding feast and the joy-transfiguration of little Ona Lukoszaite!

She stood in the doorway, shepherded by Cousin Marija, breathless from pushing through the crowd, and in her happiness painful to look upon. There was a light of wonder in her eyes and her lids trembled, and her otherwise wan little face was flushed. She wore a muslin dress, conspicuously white, and a stiff little veil coming to her shoulders. There were five pink paper roses twisted in the veil, and eleven bright green rose leaves. There were new white cotton gloves upon her hands, and as she stood staring about her she twisted them together feverishly. It was almost too much for her–you could see the pain of too great emotion in her face, and all the tremor of her form. She was so young–not quite sixteen–and small for her age, a mere child; and she had just been married–and married to Jurgis,* (*Pronounced Yoorghis) of all men, to Jurgis Rudkus, he with the white flower in the buttonhole of his new black suit, he with the mighty shoulders and the giant hands.

Ona was blue-eyed and fair, while Jurgis had great black eyes with beetling brows, and thick black hair that curled in waves about his ears–in short, they were one of those incongruous and impossible married couples with which Mother Nature so often wills to confound all prophets, before and after. Jurgis could take up a two-hundred-and-fifty-pound quarter of beef and carry it into a car without a stagger, or even a thought; and now he stood in a far corner, frightened as a hunted animal, and obliged to moisten his lips with his tongue each time before he could answer the congratulations of his friends.

Gradually there was effected a separation between the spectators and the guests–a separation at least sufficiently complete for working purposes. There was no time during the festivities which ensued when there were not groups of onlookers in the doorways and the corners; and if any one of these onlookers came sufficiently close, or looked sufficiently hungry, a chair was offered him, and he was invited to the feast. It was one of the laws of the veselija that no one goes hungry; and, while a rule made in the forests of Lithuania is hard to apply in the stockyards district of Chicago, with its quarter of a million inhabitants, still they did their best, and the children who ran in from the street, and even the dogs, went out again happier. A charming informality was one of the characteristics of this celebration.