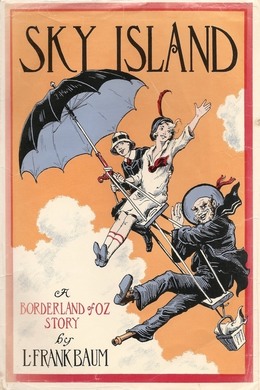 Trot is the young daughter of a California schooner captain. She is accompanied by Captain Bill – an old sailor with a wooden leg who was her father’s captain. Trot meets Button-Bright, a boy using a magic umbrella to travel from his home in Philadelphia. Trot, Button, and Captain Bill decide to travel with the umbrella, which takes them to a literal island in the sky. Sky Island is divided in half, one side pink, and the other blue, and the blues and pinks are at war. Trot, Button, and Captain Bill are imprisoned, and must somehow escape and end the conflict so they can return home.

Sky Island is the sequel to Baum’s The Sea Fairies.

“Hello,” answered Trot, looking up surprised. “Where did you come from?”

“‘Bout as far as I can get, in this country,” the boy replied, gazing out over the water. “Isn’t this the Pacific Ocean?”

“Because it’s the biggest lot of water in all the world.”

“An old sailorman who’s a friend of mine. He lives at my house, too–the white house you see over there on the bluff.”

“It’s pretty small, seems to me,” answered the boy.

“But it’s big enough for mother and me, an’ for Cap’n Bill,” said Trot.

“Haven’t you any father?”

“Yes, ‘ndeed; Cap’n Griffith is my father; but he’s gone, most of the time, sailin’ on his ship. You mus’ be a stranger in these parts, little boy, not to know ‘bout Cap’n Griffith,” she added, looking at her new acquaintance intently.

Trot wasn’t very big herself, but the boy was not quite as big as Trot. He was thin, with a rather pale complexion and his blue eyes were round and earnest. He wore a blouse waist, a short jacket and knickerbockers. Under his arm he held an old umbrella that was as tall as he was. Its covering had once been of thick brown cloth, but the color had faded to a dull drab, except in the creases, and Trot thought it looked very old-fashioned and common. The handle, though, was really curious. It was of wood and carved to resemble an elephant’s head. The long trunk of the elephant was curved to make a crook for the handle. The eyes of the beast were small red stones, and it had two tiny tusks of ivory.

The boy’s dress was rich and expensive, even to his fine silk stockings and tan shoes; but the umbrella looked old and disreputable.

“It isn’t the rainy season now,” remarked Trot, with a smile.

The boy glanced at his umbrella and hugged it tighter.

“No,” he said; “but umbrellas are good for other things ‘sides rain.”

He shook his head, still gazing far out over the water.

“I don’t b’lieve this is bigger than any other ocean,” said he. “I can’t see any more of it than I can of the Atlantic.”

“You’d find out, if you had to sail across it,” she declared.

“When I was in Chicago I saw Lake Michigan,” he went on dreamily, “and it looked just as big as this water does.”

“Looks don’t count, with oceans,” she asserted. “Your eyes can only see jus’ so far, whether you’re lookin’ at a pond or a great sea.”

“Then it doesn’t make any difference how big an ocean is,” he replied. “What are those buildings over there?” pointing to the right, along the shore of the bay.

“That’s the town,” said Trot. “Most of the people earn their living by fishing. The town is half a mile from here an’ my house is almost a half mile the other way; so it’s ‘bout a mile from my house to the town.”

The boy sat down beside her on the flat rock.

“Do you like girls?” asked Trot, making room for him.

“Not very well,” the boy replied. “Some of ‘em are pretty good fellows, but not many. The girls with brothers are bossy, an’ the girls without brothers haven’t any ‘go’ to ‘em. But the world’s full o’ both kinds, and so I try to take ‘em as they come. They can’t help being girls, of course. Do you like boys?”

“When they don’t put on airs, or get rough-house,” replied Trot. “My ‘sperience with boys is that they don’t know much, but think they do.”

“That’s true,” he answered. “I don’t like boys much better than I do girls; but some are all right, and–you seem to be one of ‘em.”

“Much obliged,” laughed Trot. “You aren’t so bad, either, an’ if we don’t both turn out worse than we seem we ought to be friends.”

He nodded, rather absently, and tossed a pebble into the water.

“That’s all. Cap’n Bill has one wooden leg,” she explained. “That’s why he don’t sailor any more. I’m glad of it, ‘cause Cap’n Bill knows ev’rything. I s’pose he knows more than anyone else in all the world.”

“Why not?” asked Trot, a little indignantly. “Folks don’t learn things with their legs, do they?”

“No; but they can’t get around, without legs, to find out things.”

“Cap’n Bill got ‘round lively ‘nough once, when he had two meat legs,” she said. “He’s sailed to ‘most ev’ry country on the earth, an’ found out all that the people in ‘em knew, and a lot besides. He was shipwrecked on a desert island, once, and another time a cannibal king tried to boil him for dinner, an’ one day a shark chased him seven leagues through the water, an’–”