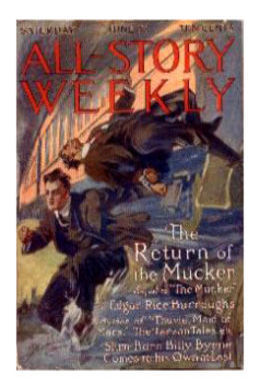 The Return of the Mucker

The remarkable story of Billy Byrne, the vicious, hardened Chicago thug and ruffian who, answering to the magical touch of a great love, gradually changed his entire point of view, ethical standards, and character, until from fear and loathing the beautiful Barbara Harding, daughter of a New York millionaire, came to trust and at last to love him. In the end, Billy, believing the gulf between “Grand Avenue and Riverside Drive” was too wide to be bridged even by love itself, refused to marry Barbara, and left her. When the present story opens over a year has elapsed and Byrne finds himself in further scrapes in revolutionary Mexico.

Billy Byrne squared his broad shoulders and filled his deep lungs with the familiar medium which is known as air in Chicago. He was standing upon the platform of a New York Central train that was pulling into the La Salle Street Station, and though the young man was far from happy something in the nature of content pervaded his being, for he was coming home.

After something more than a year of world wandering and strange adventure Billy Byrne was coming back to the great West Side and Grand Avenue.

Now there is not much upon either side or down the center of long and tortuous Grand Avenue to arouse enthusiasm, nor was Billy particularly enthusiastic about that more or less squalid thoroughfare.

The thing that exalted Billy was the idea that he was coming back to SHOW THEM. He had left under a cloud and with a reputation for genuine toughness and rowdyism that has seen few parallels even in the ungentle district of his birth and upbringing.

A girl had changed him. She was as far removed from Billy’s sphere as the stars themselves; but Billy had loved her and learned from her, and in trying to become more as he knew the men of her class were he had sloughed off much of the uncouthness that had always been a part of him, and all of the rowdyism. Billy Byrne was no longer the mucker.

He had given her up because he imagined the gulf between Grand Avenue and Riverside Drive to be unbridgeable; but he still clung to the ideals she had awakened in him. He still sought to be all that she might wish him to be, even though he realized that he never should see her again.

Grand Avenue would be the easiest place to forget his sorrow—her he could never forget. And then, his newly awakened pride urged him back to the haunts of his former life that he might, as he would put it himself, show them. He wanted the gang to see that he, Billy Byrne, wasn’t afraid to be decent. He wanted some of the neighbors to realize that he could work steadily and earn an honest living, and he looked forward with delight to the pleasure and satisfaction of rubbing it in to some of the saloon keepers and bartenders who had helped keep him drunk some five days out of seven, for Billy didn’t drink any more.

But most of all he wanted to vindicate himself in the eyes of the once–hated law. He wanted to clear his record of the unjust charge of murder which had sent him scurrying out of Chicago over a year before, that night that Patrolman Stanley Lasky of the Lake Street Station had tipped him off that Sheehan had implicated him in the murder of old man Schneider.

Now Billy Byrne had not killed Schneider. He had been nowhere near the old fellow’s saloon at the time of the holdup; but Sheehan, who had been arrested and charged with the crime, was an old enemy of Billy’s, and Sheehan had seen a chance to divert some of the suspicion from himself and square accounts with Byrne at the same time.

The new Billy Byrne was ready to accept at face value everything which seemed to belong in any way to the environment of that exalted realm where dwelt the girl he loved. Law, order, and justice appeared to Billy in a new light since he had rubbed elbows with the cultured and refined.

He no longer distrusted or feared them. They would give him what he sought—a square deal.

It seemed odd to Billy that he should be seeking anything from the law or its minions. For years he had waged a perpetual battle with both. Now he was coming back voluntarily to give himself up, with every conviction that he should be exonerated quickly. Billy, knowing his own innocence, realizing his own integrity, assumed that others must immediately appreciate both.

“First,” thought Billy, “I’ll go take a look at little old Grand Ave., then I’ll give myself up. The trial may take a long time, an’ if it does I want to see some of the old bunch first.”

So Billy entered an “L” coach and leaning on the sill of an open window watched grimy Chicago rattle past until the guard’s “Granavenoo” announced the end of his journey.

Maggie Shane was sitting on the upper step of the long flight of stairs which lean precariously against the scarred face of the frame residence upon the second floor front of which the lares and penates of the Shane family are crowded into three ill–smelling rooms.

It was Saturday and Maggie was off. She sat there rather disconsolate for there was a dearth of beaux for Maggie, none having arisen to fill the aching void left by the sudden departure of “Coke” Sheehan since that worthy gentleman had sought a more salubrious clime—to the consternation of both Maggie Shane and Mr. Sheehan’s bondsmen.

Maggie scowled down upon the frowsy street filled with frowsy women and frowsy children. She scowled upon the street cars rumbling by with their frowsy loads. Occasionally she varied the monotony by drawing out her chewing gum to wondrous lengths, holding one end between a thumb and finger and the other between her teeth.