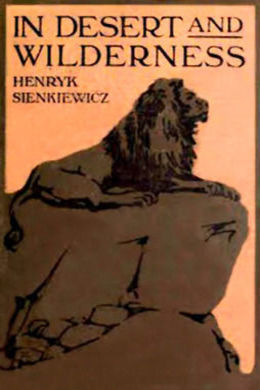 In Desert and Wilderness

The renowned Polish novelist, inspired by his travels through Africa, gives us a fascinating book recounting adventures and experiences of two children during an escape from Khartoum after the death of General Gordon, and their flight through Africa to the Indian Ocean. The children’s adventures in the Egyptian desert and African wilderness at the time of the Mahdi (1848 - 1885) also contain a vast quantity of information about the plant and animal life of the African swamps and jungle.

“Do you know, Nell,” said Stas Tarkowski to his friend, a little English girl, “that yesterday the police came and arrested the wife of Smain, the overseer, and her three children,–that Fatma who several times called at the office to see your father and mine.”

And little Nell, resembling a beautiful picture, raised her greenish eyes to Stas and asked with mingled surprise and fright:

“Did they take her to prison?”

“No, but they will not let her go to the Sudân and an official has arrived who will see that she does not move a step out of Port Said.”

Stas, who was fourteen years old and who loved his eight-year-old companion very much, but looked upon her as a mere child, said with a conceited air:

“When you reach my age, you will know everything which happens, not only along the Canal from Port Said to Suez, but in all Egypt. Have you ever heard of the Mahdi?”

“I heard that he is ugly and naughty.”

“I do not know whether he is ugly. The Sudânese claim that he is handsome. But the word ‘naughty’ about a man who has murdered so many people, could be used only by a little girl, eight years old, in dresses–oh–reaching the knees.”

“Papa told me so and papa knows best.”

“He told you so because otherwise you would not understand. He would not express himself to me in that way. The Mahdi is worse than a whole shoal of crocodiles. Do you understand? That is a nice expression for me. ‘Naughty!’ They talk that way to babes.”

But, observing the little girl’s clouded face, he became silent and afterwards said:

“Nell, you know I did not want to cause you any unpleasantness. The time will come when you will be fourteen. I certainly promise you that.”

“Aha!” she replied with a worried look, “but if before that time the Mahdi should dash into Port Said and eat me.”

“The Mahdi is not a cannibal, so he does not eat people. He only kills them. He will not dash into Port Said, but even if he did and wanted to murder you, he would first have to do with me.”

This declaration with the sniff with which Stas inhaled the air through his nose, did not bode any good for the Mahdi and considerably quieted Nell as to her own person.

“I know,” she answered, “you would not let him harm me. But why do they not allow Fatma to leave Port Said?”

“Because Fatma is a cousin of the Mahdi. Her husband, Smain, made an offer to the Egyptian Government at Cairo to go to the Sudân, where the Mahdi is staying, and secure the liberty of all Europeans who have fallen into his hands.”

“Then Smain is a good man?”

“Wait! Your papa and my papa, who knew Smain thoroughly, did not have any confidence in him and warned Nubar Pasha not to trust him. But the Government agreed to send Smain and Smain remained over half a year with the Mahdi. The prisoners not only did not return, but news has come from Khartûm that the Mahdists are treating them more and more cruelly, and that Smain, having taken money from the Government, has become a traitor. He joined the Mahdi’s army and has been appointed an emir. The people say that in that terrible battle in which General Hicks fell, Smain commanded the Mahdi’s artillery and that he probably taught the Mahdists how to handle the cannon, which before that time they, as savage people, could not do. But now Smain is anxious to get his wife and children out of Egypt. So when Fatma, who evidently knew in advance what Smain was going to do, wanted secretly to leave Port Said, the Government arrested her with the children.”

“But what good are Fatma and her children to the Government?”

“The Government will say to the Mahdi,–‘Give us the prisoners and we will surrender Fatma’–”

For the time the conversation was interrupted because the attention of Stas was attracted by birds flying from the direction of Echtum om Farag towards Lake Menzaleh. They flew quite low and in the clear atmosphere could be plainly seen some pelicans with curved napes, slowly moving immense wings. Stas at once began to imitate their flight. So with head upraised, he ran a score of paces along the dyke, waving his outstretched arms.

Stas stood still in a moment, as actually behind the pelicans, but somewhat higher, could be seen, suspended in the sky, two great red and purple flowers, as it were.

“Flamingoes! flamingoes! Before night they return to their haunts on the little islands,” the boy said. “Oh, if I only had a rifle!”

“Why should you want to shoot at them?”

“Girls don’t understand such things. But let us go farther; we may see more of them.”