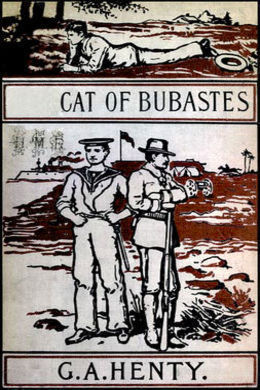 The Cat of Bubastes

A Tale of Ancient Egypt

The sacred cat of Bubastes has accidentally been slain; now young Chebron must pay for the offence with his own life, as this is the law of the Pagans in Egypt, 1250 BC. Chebron, the son of a high Egyptian priest, flees for his life taking his sister Mysa, one of the household slaves Amuba and several companions with him. They escape through closely guarded Egyptian exits only to find themselves in unfamiliar and dangerous lands inhabited by a very different culture of people. Along the way, the roving band of refugees encounters and befriends a Hebrew girl, who exposes them to very strange ideas including the worship of “one true God.” This arduous journey through time, customs and religion provides an adventurous and accurate insight into the ancient people of Egyptian history.

The sun was blazing down upon a city on the western shore of the Caspian. It was a primitive city, and yet its size and population rendered it worthy of the term. It consisted of a vast aggregation of buildings, which were for the most part mere huts. Among them rose, however, a few of more solid build and of higher pretensions. These were the abodes of the chiefs and great men, the temples, and places of assembly. But although larger and more solidly built, these buildings could lay no claim to architectural beauty of any kind, but were little more than magnified huts, and even the king’s palace was but a collection of such buildings closely adjoining each other.

The town was surrounded by a lofty wall with battlements and loopholes, and a similar but higher wall girt in the dwellings of the king and of his principal captains. The streets were alive with the busy multitude; and it was evident that although in the arts of peace the nation had made but little progress, they had in every thing appertaining to war made great advances. Most of the men wore helmets closely fitting to the head and surmounted by a spike. These were for the most part composed of hammered brass, although some of the headpieces were made of tough hide studded with knobs of metal. All carried round shields–those of the soldiers, of leather stiffened with metal; those of the captains, of brass, worked with considerable elaboration.

In their belts all wore daggers, while at their backs were slung quivers of iron; painted bows hung over one shoulder, and some had at their waist a pouch of smooth flat stones and leather slings. Their chief garment was a sort of kilt falling to the knee. Above the waist some wore only a thin vest of white linen, others a garment not unlike the nightgown of modern times, but with short sleeves. The kilt was worn over this. Some had breastpieces of thick leather confined by straps behind; while in the case of the officers the leather was covered with small pieces of metal, forming a cuirass.

All carried two or three javelins in the left hand and a spear some ten feet long in the right. Horsemen galloped about at full speed to and from the royal palace, while occasionally chariots, drawn sometimes by one, sometimes by two horses, dashed along. These chariots were small, the wheels not exceeding three feet in height. Between them was placed the body of the vehicle, which was but just large enough for two men to stand on. It consisted only of a small platform, with a semicircular rail running round the front some eighteen inches above it. A close observer would have perceived at once that not only were the males of the city upon the point of marching out on a military expedition, but that it was no mere foray against a neighboring people, but a war on which the safety of the city depended.

Women were standing in tearful groups as they watched the soldiers making toward the gates. The men themselves had a resolute and determined look, but there was none of the light-hearted gayety among them which betokened the expectation of success and triumph. Inside the palace the bustle of preparation was as marked as without. The king and his principal councilors and leaders were assembled in the great circular hut which formed the audience-room and council-chamber. Messengers arrived in close succession with news of the progress and strength of the enemy, or with messages from the neighboring towns and tribes as to the contingents they had furnished, and the time at which these had set out to join the army.

The king himself was a tall and warlike figure, in the prime of life. He had led his warriors on many successful expeditions far to the west, and had repulsed with great loss the attempts of the Persians to encroach upon his territory. Standing behind him was his son, Amuba, a lad of some fifteen years of age. The king and his councilors, as well as all the wealthier inhabitants of the city, wore, in addition to the kilt and linen jacket, a long robe highly colored and ornamented with fanciful devices and having a broad rich border. It was fastened at the neck with a large brooch, fell loosely from the shoulders to the ankles, and was open in front. The girdles which retained the kilts and in which the daggers were worn were highly ornamented, and the ends fell down in front and terminated in large tassels.

All wore a profusion of necklaces, bracelets, and other ornaments of gold; many of the chiefs wore feathers in their helmets, and the greater portion of all ranks had figures tattooed on their arms and legs. They were fair in complexion, with blue eyes; their hair was for the most part golden or red, and they wore their beards short and pointed.