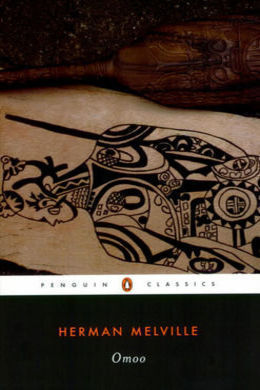 Adventures in the South Seas

Named after the Polynesian term for a rover, or someone who roams from island to island, Omoo chronicles the tumultuous events aboard a South Sea whaling vessel and is based on Melville’s personal experiences as a crew member on a ship sailing the Pacific. From recruiting among the natives for sailors to handling deserters and even mutiny, Melville gives a first-person account of life as a sailor during the nineteenth century filled with colourful characters and vivid descriptions of the far-flung locales of Polynesia.

It was the middle of a bright tropical afternoon that we made good our escape from the bay. The vessel we sought lay with her main-topsail aback about a league from the land, and was the only object that broke the broad expanse of the ocean.

On approaching, she turned out to be a small, slatternly-looking craft, her hull and spars a dingy black, rigging all slack and bleached nearly white, and everything denoting an ill state of affairs aboard. The four boats hanging from her sides proclaimed her a whaler. Leaning carelessly over the bulwarks were the sailors, wild, haggard-looking fellows in Scotch caps and faded blue frocks; some of them with cheeks of a mottled bronze, to which sickness soon changes the rich berry-brown of a seaman’s complexion in the tropics.

On the quarter-deck was one whom I took for the chief mate. He wore a broad-brimmed Panama hat, and his spy-glass was levelled as we advanced.

When we came alongside, a low cry ran fore and aft the deck, and everybody gazed at us with inquiring eyes. And well they might. To say nothing of the savage boat’s crew, panting with excitement, all gesture and vociferation, my own appearance was calculated to excite curiosity. A robe of the native cloth was thrown over my shoulders, my hair and beard were uncut, and I betrayed other evidences of my recent adventure. Immediately on gaining the deck, they beset me on all sides with questions, the half of which I could not answer, so incessantly were they put.

As an instance of the curious coincidences which often befall the sailor, I must here mention that two countenances before me were familiar. One was that of an old man-of-war’s-man, whose acquaintance I had made in Rio de Janeiro, at which place touched the ship in which I sailed from home. The other was a young man whom, four years previous, I had frequently met in a sailor boarding-house in Liverpool. I remembered parting with him at Prince’s Dock Gates, in the midst of a swarm of police-officers, trackmen, stevedores, beggars, and the like. And here we were again:–years had rolled by, many a league of ocean had been traversed, and we were thrown together under circumstances which almost made me doubt my own existence.

But a few moments passed ere I was sent for into the cabin by the captain.

He was quite a young man, pale and slender, more like a sickly counting-house clerk than a bluff sea-captain. Bidding me be seated, he ordered the steward to hand me a glass of Pisco. In the state I was, this stimulus almost made me delirious; so that of all I then went on to relate concerning my residence on the island I can scarcely remember a word. After this I was asked whether I desired to “ship”; of course I said yes; that is, if he would allow me to enter for one cruise, engaging to discharge me, if I so desired, at the next port. In this way men are frequently shipped on board whalemen in the South Seas. My stipulation was acceded to, and the ship’s articles handed me to sign.

The mate was now called below, and charged to make a “well man” of me; not, let it be borne in mind, that the captain felt any great compassion for me, he only desired to have the benefit of my services as soon as possible.

Helping me on deck, the mate stretched me out on the windlass and commenced examining my limb; and then doctoring it after a fashion with something from the medicine-chest, rolled it up in a piece of an old sail, making so big a bundle that, with my feet resting on the windlass, I might have been taken for a sailor with the gout. While this was going on, someone removing my tappa cloak slipped on a blue frock in its place, and another, actuated by the same desire to make a civilized mortal of me, flourished about my head a great pair lie imminent jeopardy of both ears, and the certain destruction of hair and beard.

The day was now drawing to a close, and, as the land faded from my sight, I was all alive to the change in my condition. But how far short of our expectations is oftentimes the fulfilment of the most ardent hopes. Safe aboard of a ship–so long my earnest prayer–with home and friends once more in prospect, I nevertheless felt weighed down by a melancholy that could not be shaken off. It was the thought of never more seeing those who, notwithstanding their desire to retain me a captive, had, upon the whole, treated me so kindly. I was leaving them for ever.

So unforeseen and sudden had been my escape, so excited had I been through it all, and so great the contrast between the luxurious repose of the valley, and the wild noise and motion of a ship at sea, that at times my recent adventures had all the strangeness of a dream; and I could scarcely believe that the same sun now setting over a waste of waters, had that very morning risen above the mountains and peered in upon me as I lay on my mat in Typee.