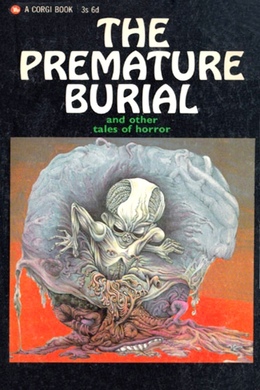 Poe’s short horror story on the theme of being buried alive, which was a common fear in this period and Poe took advantage of the public interest. The first-person unnamed narrator describes his struggle with “attacks of the singular disorder which physicians have agreed to term catalepsy,” a condition where he randomly falls into a death-like trance. This leads to his fear of being buried alive (“The true wretchedness,” he says, is “to be buried while alive.”). He awakens one morning to find his worst fears realized!

The Premature Burial is widely considered to be one of the top 100 greatest books of all time.

There are certain themes of which the interest is all-absorbing, but which are too entirely horrible for the purposes of legitimate fiction. These the mere romanticist must eschew, if he do not wish to offend or to disgust. They are with propriety handled only when the severity and majesty of Truth sanctify and sustain them. We thrill, for example, with the most intense of “pleasurable pain” over the accounts of the Passage of the Beresina, of the Earthquake at Lisbon, of the Plague at London, of the Massacre of St. Bartholomew, or of the stifling of the hundred and twenty-three prisoners in the Black Hole at Calcutta. But in these accounts it is the fact—-it is the reality—-it is the history which excites. As inventions, we should regard them with simple abhorrence.

I have mentioned some few of the more prominent and august calamities on record; but in these it is the extent, not less than the character of the calamity, which so vividly impresses the fancy. I need not remind the reader that, from the long and weird catalogue of human miseries, I might have selected many individual instances more replete with essential suffering than any of these vast generalities of disaster. The true wretchedness, indeed–the ultimate woe—-is particular, not diffuse. That the ghastly extremes of agony are endured by man the unit, and never by man the mass—-for this let us thank a merciful God!

To be buried while alive is, beyond question, the most terrific of these extremes which has ever fallen to the lot of mere mortality. That it has frequently, very frequently, so fallen will scarcely be denied by those who think. The boundaries which divide Life from Death are at best shadowy and vague. Who shall say where the one ends, and where the other begins? We know that there are diseases in which occur total cessations of all the apparent functions of vitality, and yet in which these cessations are merely suspensions, properly so called. They are only temporary pauses in the incomprehensible mechanism. A certain period elapses, and some unseen mysterious principle again sets in motion the magic pinions and the wizard wheels. The silver cord was not for ever loosed, nor the golden bowl irreparably broken. But where, meantime, was the soul?

Apart, however, from the inevitable conclusion, a priori that such causes must produce such effects—-that the well-known occurrence of such cases of suspended animation must naturally give rise, now and then, to premature interments–apart from this consideration, we have the direct testimony of medical and ordinary experience to prove that a vast number of such interments have actually taken place. I might refer at once, if necessary to a hundred well authenticated instances. One of very remarkable character, and of which the circumstances may be fresh in the memory of some of my readers, occurred, not very long ago, in the neighboring city of Baltimore, where it occasioned a painful, intense, and widely-extended excitement. The wife of one of the most respectable citizens–a lawyer of eminence and a member of Congress–was seized with a sudden and unaccountable illness, which completely baffled the skill of her physicians. After much suffering she died, or was supposed to die. No one suspected, indeed, or had reason to suspect, that she was not actually dead. She presented all the ordinary appearances of death. The face assumed the usual pinched and sunken outline. The lips were of the usual marble pallor. The eyes were lustreless. There was no warmth. Pulsation had ceased. For three days the body was preserved unburied, during which it had acquired a stony rigidity. The funeral, in short, was hastened, on account of the rapid advance of what was supposed to be decomposition.

The lady was deposited in her family vault, which, for three subsequent years, was undisturbed. At the expiration of this term it was opened for the reception of a sarcophagus;—-but, alas! how fearful a shock awaited the husband, who, personally, threw open the door! As its portals swung outwardly back, some white-apparelled object fell rattling within his arms. It was the skeleton of his wife in her yet unmoulded shroud.