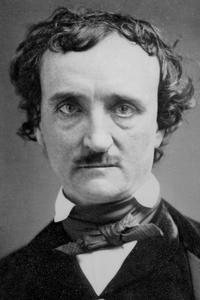 Edgar Allan Poe was an American writer, poet, editor and literary critic, considered part of the American Romantic Movement. Best known for his tales of mystery and the macabre, Poe was one of the earliest American practitioners of the short story and is considered the inventor of the detective-fiction genre. He is further credited with contributing to the emerging genre of science fiction.

Edgar Allan Poe’s dream poem is as close to music as words can ever come. First published on October 9, 1849 – two days after Poe’s death – this hauntin...read more »

In this remarkable work, master story-teller Edgar Allan Poe builds on known scientific truths to propound a universe governed by the immutable laws of ...read more »

A dwarf is taken from his homeland and becomes the jester of a king particularly fond of practical jokes. Taking revenge on the king and his cabinet for...read more »

Ligeia is a book written by Edgar Allan Poe and widely considered to be one of the top 100 greatest books of all time. This great novel will surely attr...read more »

The plot follows an unnamed narrator at sea who finds himself in a series of harrowing circumstances. As he nears his own disastrous death while his shi...read more »

The Balloon-Hoax is the title now used for a newspaper article written by Edgar Allan Poe, first published in 1844. Originally presented as a true story...read more »

A study of the psychology of guilt, often paired in analysis with Poe’s "The Tell-Tale Heart". In both, a murderer carefully conceals his crime and beli...read more »

Montressor, angry over insults by his friend Fortunato, a fellow nobleman, plots to murder him during Carnival when the man is drunk, by immurement, sea...read more »

The Facts in the Case of M. Valdemar tells the tale of a mesmerist who puts a man in a suspended hypnotic state at the moment of death to see if he can ...read more »

Follow the macabre events that sweep the narrator into the haunted world of Roderick Usher–a morbid recluse and slave to fear–whose descent into madness...read more »

Believing William Legrand to have gone insane following an insect bite, his friend initially decries his quest for gold as the ramblings of a madman. Ye...read more »

The story follows an unnamed narrator who seeks out the famous war hero John A. B. C. Smith. He becomes suspicious that Smith has some deep secret when ...read more »

A thousand of the favored joined their decadent prince behind high walls and welded gates. They engaged in bizarre celebrations while the Red Death rage...read more »

The Narrative of Arthur Gordon Pym of Nantucket (1838)

A stowaway aboard the whaling ship Grampus, Arthur Gordon Pym finds himself bound on an extraordinary voyage to the high southern latitudes. Poes novel ...read more »

Our protagonist takes refuge in an abandoned castle and discovers a room with a series of paintings accompanied by a small book describing them. His att...read more »

Pit and The Pendulum is about the torments endured by a prisoner of the Spanish Inquisition. The story is especially effective at inspiring fear in the ...read more »

Poe’s short horror story on the theme of being buried alive, which was a common fear in this period and Poe took advantage of the public interest. The f...read more »

The Purloined Letter is the third of the three stories featuring the detective C. Auguste Dupin, the other two being The Murders in the Rue Morgue and T...read more »

The Raven is noted for its musicality, stylized language and supernatural atmosphere, it tells of the mysterious visit of a talking raven to a distraugh...read more »

The Sphinx is a short story written by Edgar Allan Poe about a man who decides to visit a relative living near the Hudson River, north of New York City,...read more »

The System of Doctor Tarr and Professor Fether (1845)

The story follows an unnamed narrator who visits a mental institution in southern France known for a revolutionary new method of treating mental illness...read more »

It takes much deception, betrayal, and madness to commit a murder. Even more madness to cover up that murder. In this haunting tale we follow the detail...read more »

Volume two of the complete works in five volumes from one of the leaders of the American Romantics. Macabre parties in isolated castles … Gruesome besti...read more »

Volume two of the complete works in five volumes from one of the leaders of the American Romantics. Macabre parties in isolated castles … Gruesome besti...read more »

Volume three of the complete works in five volumes from one of the leaders of the American Romantics. Macabre parties in isolated castles … Gruesome bes...read more »

Volume four of the complete works in five volumes from one of the leaders of the American Romantics. Macabre parties in isolated castles … Gruesome best...read more »

William Wilson tells the tale of a man who travels around the world pursued by his ghostly double who tries to keep him from sin and vice. This stands o...read more »