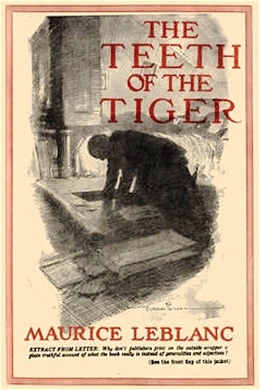 The Teeth of the Tiger

This is one of three novels about Lupin written in World War I. Lupin is a sincere hero who has failings, which ender him to the reader. This romance and adventure/thriller is by far the best of the Lupin series. Contents: D’artagnan, Porthos…And Monte Cristo; A Man Dead; A Man Doomed; The Clouded Turquoise; The Iron Curtain; The Man With The Ebony Walking-stick; Shakespeare’s Works, Volume Viii; The Devil’s Post-office; Lupin’s Anger; Gaston Sauverand Explains; Routed; “Help!”; The Explosion; The “hater”; The Heir To The Hundred Millions; Weber Takes His Revenge; Open Sesame!; Arsène I Emperor Of Mauretania; “The Snare Is Laid. Beware, Lupin!”; Florence’s Secret; Lupin’s Lupins.

It was half-past four; M. Desmalions, the Prefect of Police, was not yet back at the office. His private secretary laid on the desk a bundle of letters and reports which he had annotated for his chief, rang the bell and said to the messenger who entered by the main door:

“Monsieur le Préfet has sent for a number of people to see him at five o’clock. Here are their names. Show them into separate waiting-rooms, so that they can’t communicate with one another, and let me have their cards when they come.”

The messenger went out. The secretary was turning toward the small door that led to his room, when the main door opened once more and admitted a man who stopped and leaned swaying over the back of a chair.

“Why, it’s you, Vérot!” said the secretary. “But what’s happened? What’s the matter?”

Inspector Vérot was a very stout, powerfully built man, with a big neck and shoulders and a florid complexion. He had obviously been upset by some violent excitement, for his face, streaked with red veins and usually so apoplectic, seemed almost pale.

“Yes, yes; you’re not looking your usual self. You’re gray in the face…. And the way you’re perspiring….”

Inspector Vérot wiped his forehead and, pulling himself together, said:

“It’s just a little tiredness…. I’ve been overworking myself lately: I was very keen on clearing up a case which Monsieur Desmalions had put in my hands. All the same, I have a funny sort of feeling–”

His voice faltered. He wore a troubled look, as if he had suddenly lost his power of getting out another word. But he recovered himself with an effort and asked:

“No; he won’t be back till five, when he has an important meeting.”

The secretary stared at Vérot and said:

“What a state you’re in! Is your message so urgent as all that?”

“It’s very urgent, indeed. It has to do with a crime that took place a month ago, to the day. And, above all, it’s a matter of preventing two murders which are the outcome of that other crime and which are to be committed to-night. Yes, to-night, inevitably, unless we take the necessary steps.”

“You see, the whole thing has been planned in such an infernal manner! You would never have imagined–”

“Still, Vérot, as you know about it beforehand, and as Monsieur le Préfet is sure to give you full powers–”

“Yes, of course, of course. But, all the same, it’s terrible to think that I might miss him. So I wrote him this letter, telling him all I know about the business. I thought it safer.”

He handed the secretary a large yellow envelope and added:

“And here’s a little box as well; I’ll leave it on this table. It contains something that will serve to complete and explain the contents of the letter.”

“But why don’t you keep all that by you?”

“I’m afraid to. They’re watching me. They’re trying to get rid of me. I shan’t be easy in my mind until some one besides myself knows the secret.”

“Have no fear, Vérot. Monsieur le Préfet is bound to be back soon. Meanwhile, I advise you to go to the infirmary and ask for a pick-me-up.”

The inspector seemed undecided what to do. Once more he wiped away the perspiration that was trickling down his forehead. Then, drawing himself up, he left the office. When he was gone the secretary slipped the letter into a big bundle of papers that lay on the Prefect’s desk and went out by the door leading to his own room.

He had hardly closed it behind him when the other door opened once again and the inspector returned, spluttering:

“Monsieur le Secrétaire … it’d be better if I showed you–”

The unfortunate man was as white as a sheet. His teeth were chattering. When he saw that the secretary was gone, he tried to walk across to his private room. But he was seized with an attack of weakness and sank into a chair, where he remained for some minutes, moaning helplessly:

The desk stood within reach of his hand. He took a pencil, drew a writing-pad toward him and began to scribble a few characters. But he next stammered:

“Why, no, it’s not worth while. The Prefect will be reading my letter…. What on earth’s the matter with me. I don’t like this at all!”

Suddenly he rose to his feet and called out:

“Monsieur le Secrétaire, we’ve got … we’ve got to … It’s for to-night. Nothing can prevent–”