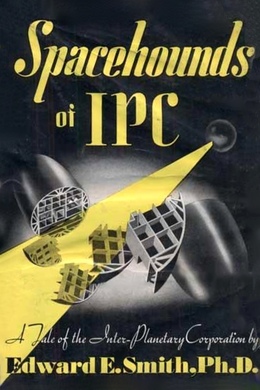 When the Inter-Planetary Corporation’s crack liner Arcturus took off on a routine flight to Mars, it turned out to be the beginning of a most unexpected and long voyage. Attacked by a mysterious spaceship, the liner crash-landed on Ganymede. The survivors first had to master that world’s primeval terrors, then construct a new spacecraft, and finally, find a way to deal with the warring intelligences of the Jovian system. Spacehounds can do all these things, given time, resources, and freedom from attack. But…

A narrow football of steel, the Inter-Planetary Vessel Arcturus stood upright in her berth in the dock like an egg in its cup. A hundred feet across and a hundred and seventy feet deep was that gigantic bowl, its walls supported by the structural steel and concrete of the dock and lined with hard-packed bumper-layers of hemp and fiber. High into the air extended the upper half of the ship of space–a sullen gray expanse of fifty-inch hardened steel armor, curving smoothly upward to a needle prow. Countless hundreds of fine vertical scratches marred every inch of her surface, and here and there the stubborn metal was grooved and scored to a depth of inches–each scratch and score the record of an attempt of some wandering cosmic body to argue the right-of-way with the stupendous mass of that man-made cruiser of the void.

A burly young man made his way through the throng about the entrance, nodded unconcernedly to the gatekeeper, and joined the stream of passengers flowing through the triple doors of the double airlock and down a corridor to the center of the vessel. However, instead of entering one of the elevators which were whisking the passengers up to their staterooms in the upper half of the enormous football, he in some way caused an opening to appear in an apparently blank steel wall and stepped through it into the control room.

“Hi, Breck!” the burly one called, as he strode up to the instrument-desk of the chief pilot and tossed his bag carelessly into a corner. “Behold your computer in the flesh! What’s all this howl and fuss about poor computation?”

“Ho, Steve!” The chief pilot smiled as he shook hands cordially. “Glad to see you again–but don’t try to kid the old man. I’m simple enough to believe almost anything, but some things just aren’t being done. We have been yelling, and yelling loud, for trained computers ever since they started riding us about every one-centimeter change in acceleration, but I know that you’re no more an I-P computer than I am a Digger Indian. They don’t shoot sparrows with coast-defense guns!”

“Thanks for the compliment, Breck, but I’m your computer for this trip, anyway. Newton, the good old egg, knows what you fellows are up against and is going to do something about it, if he has to lick all the rest of the directors to do it. He knew that I was loose for a couple of weeks and asked me to come along this trip to see what I could see. I’m to check the observatory date–they don’t know I’m aboard–take the peaks and valleys off your acceleration curve, if possible, and report to Newton just what I find out and what I think should be done about it. How early am I?” While the newcomer was talking, he had shipped the covers from a precise scale model of the solar system and from a large and complicated calculating machine and had set to work without a wasted motion or instant–scaling off the model the positions of the various check-stations and setting up long and involved integrals and equations upon the calculator.

The older man studied the broad back of the younger, bent over his computations, and a tender, almost fatherly smile came over his careworn face as he replied:

“Early? You? Just like you always were–minus fifteen seconds on zero. The final dope is due right now.” He plugged the automatic recorder and speaker into a circuit marked “Observatory”, waited until a tiny light above the plug flashed green, and spoke.

“Meteoric swarms still too numerous for safe travel along the scheduled route,” came promptly from the speaker. “You must stay further away from the plane of the ecliptic. The ether will be clear for you along route E2-P6-W41-K3-R19-S7-M14. You will hold a constant acceleration of 981.27 centimeters between initial and final check-stations. Your take-off will be practically unobstructed, but you will have to use the utmost caution in landing upon Mars, as in order to avoid a weightless detour and a loss of thirty-one minutes you must pass very close to both the Martian satellites. To do so safely you must pass the last meteorological station, M14, on schedule time plus or minus five seconds, at scheduled velocity plus or minus ten meters, with exactly the given negative acceleration of 981.27 centimeters, and exactly upon the pilot ray M14 will have set for you.”

“All x.” Breckenridge studied his triplex chronometer intently, then unplugged and glanced around the control room, in various parts of which half a dozen assistants were loafing at their stations.

“Control and power check-out–Hipe!” he barked. “Driving converters and projectors!”