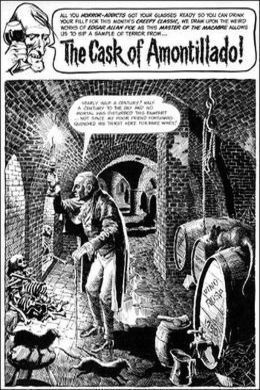 The Cask of Amontillado

Montressor, angry over insults by his friend Fortunato, a fellow nobleman, plots to murder him during Carnival when the man is drunk, by immurement, sealing him up alive behind walls of bricks. He baits Fortunato by telling him he has obtained, out of season, what he believes to be a pipe of Amontillado, about 130 gallons, a rare and valuable sherry wine. He wants his friend’s expert opinion on the subject. Unaware of Montresor’s true intent Fortunato leaves with him for the wine cellars of the latter’s palazzo, where they travel through the deep catacombs far, far below the home…the conclusion to this suspenseful story is memorable, to say the least.

The thousand injuries of Fortunato I had borne as I best could, but when he ventured upon insult, I vowed revenge. You, who so well know the nature of my soul, will not suppose, however, that I gave utterance to a threat. At length I would be avenged; this was a point definitely settled–but the very definitiveness with which it was resolved, precluded the idea of risk. I must not only punish, but punish with impunity. A wrong is unredressed when retribution overtakes its redresser. It is equally unredressed when the avenger fails to make himself felt as such to him who has done the wrong.

It must be understood that neither by word nor deed had I given Fortunato cause to doubt my good will. I continued, as was my wont, to smile in his face, and he did not perceive that my smile now was at the thought of his immolation.

He had a weak point–this Fortunato–although in other regards he was a man to be respected and even feared. He prided himself on his connoisseurship in wine. Few Italians have the true virtuoso spirit. For the most part their enthusiasm is adopted to suit the time and opportunity–to practise imposture upon the British and Austrian millionaires. In painting and gemmary, Fortunato, like his countrymen, was a quack–but in the matter of old wines he was sincere. In this respect I did not differ from him materially: I was skillful in the Italian vintages myself, and bought largely whenever I could.

It was about dusk, one evening during the supreme madness of the carnival season, that I encountered my friend. He accosted me with excessive warmth, for he had been drinking much. The man wore motley. He had on a tight-fitting parti-striped dress, and his head was surmounted by the conical cap and bells. I was so pleased to see him, that I thought I should never have done wringing his hand.

I said to him–“My dear Fortunato, you are luckily met. How remarkably well you are looking to-day! But I have received a pipe of what passes for Amontillado, and I have my doubts.”

“How?” said he. “Amontillado? A pipe? Impossible! And in the middle of the carnival!”

“I have my doubts,” I replied; “and I was silly enough to pay the full Amontillado price without consulting you in the matter. You were not to be found, and I was fearful of losing a bargain.”