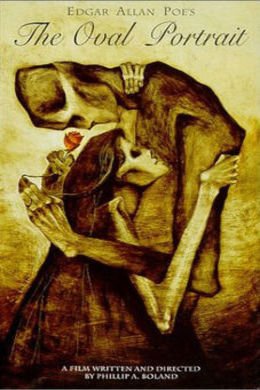 Our protagonist takes refuge in an abandoned castle and discovers a room with a series of paintings accompanied by a small book describing them. His attention is attracted by an oval portrait depicting a young woman of rare beauty. The book tells of the artist falling in love with the gir and marrying her. It was not soon after that the girl realised her husband was already married to his art. One day the painter decides to paint his wife and in doing so with such fervor, he didn’t notice that as the days passed she became more and more saddened. When the portrait was finished he was shocked to discover that the painting of his wife was much, much more than life-like.

THE chateau into which my valet had ventured to make forcible entrance, rather than permit me, in my desperately wounded condition, to pass a night in the open air, was one of those piles of commingled gloom and grandeur which have so long frowned among the Appennines, not less in fact than in the fancy of Mrs. Radcliffe. To all appearance it had been temporarily and very lately abandoned. We established ourselves in one of the smallest and least sumptuously furnished apartments. It lay in a remote turret of the building. Its decorations were rich, yet tattered and antique. Its walls were hung with tapestry and bedecked with manifold and multiform armorial trophies, together with an unusually great number of very spirited modern paintings in frames of rich golden arabesque. In these paintings, which depended from the walls not only in their main surfaces, but in very many nooks which the bizarre architecture of the chateau rendered necessary—in these paintings my incipient delirium, perhaps, had caused me to take deep interest; so that I bade Pedro to close the heavy shutters of the room—since it was already night—to light the tongues of a tall candelabrum which stood by the head of my bed—and to throw open far and wide the fringed curtains of black velvet which enveloped the bed itself. I wished all this done that I might resign myself, if not to sleep, at least alternately to the contemplation of these pictures, and the perusal of a small volume which had been found upon the pillow, and which purported to criticise and describe them.

Long—long I read—and devoutly, devotedly I gazed. Rapidly and gloriously the hours flew by and the deep midnight came. The position of the candelabrum displeased me, and outreaching my hand with difficulty, rather than disturb my slumbering valet, I placed it so as to throw its rays more fully upon the book.

But the action produced an effect altogether unanticipated. The rays of the numerous candles (for there were many) now fell within a niche of the room which had hitherto been thrown into deep shade by one of the bed–posts. I thus saw in vivid light a picture all unnoticed before. It was the portrait of a young girl just ripening into womanhood. I glanced at the painting hurriedly, and then closed my eyes. Why I did this was not at first apparent even to my own perception. But while my lids remained thus shut, I ran over in my mind my reason for so shutting them. It was an impulsive movement to gain time for thought—to make sure that my vision had not deceived me—to calm and subdue my fancy for a more sober and more certain gaze. In a very few moments I again looked fixedly at the painting.