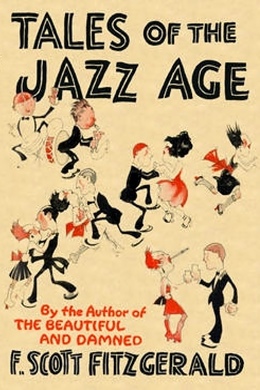 Tales of the Jazz Age

A collection of 11 classic short stories by F. Scott Fitzgerald, reprinted as they first appeared together in 1922. Included are The Curious Case of Benjamin Button, The Diamond as Big as the Ritz, May Day, The Camel’s Back, The Jelly-Bean, Porcelain and Pink, Tarquin of Cheapside, O Russet Witch!, The Lees of Happiness, Mr. Icky, & Jemina.

Jim Powell was a Jelly-bean. Much as I desire to make him an appealing character, I feel that it would be unscrupulous to deceive you on that point. He was a bred-in-the-bone, dyed-in-the-wool, ninety-nine three-quarters per cent Jelly-bean and he grew lazily all during Jelly-bean season, which is every season, down in the land of the Jelly-beans well below the Mason-Dixon line.

Now if you call a Memphis man a Jelly-bean he will quite possibly pull a long sinewy rope from his hip pocket and hang you to a convenient telegraph-pole. If you Call a New Orleans man a Jelly-bean he will probably grin and ask you who is taking your girl to the Mardi Gras ball. The particular Jelly-bean patch which produced the protagonist of this history lies somewhere between the two–a little city of forty thousand that has dozed sleepily for forty thousand years in southern Georgia occasionally stirring in its slumbers and muttering something about a war that took place sometime, somewhere, and that everyone else has forgotten long ago.

Jim was a Jelly-bean. I write that again because it has such a pleasant sound–rather like the beginning of a fairy story–as if Jim were nice. It somehow gives me a picture of him with a round, appetizing face and all sort of leaves and vegetables growing out of his cap. But Jim was long and thin and bent at the waist from stooping over pool-tables, and he was what might have been known in the indiscriminating North as a corner loafer. “Jelly-bean” is the name throughout the undissolved Confederacy for one who spends his life conjugating the verb to idle in the first person singular–I am idling, I have idled, I will idle.

Jim was born in a white house on a green corner, It had four weather-beaten pillars in front and a great amount of lattice-work in the rear that made a cheerful criss-cross background for a flowery sun-drenched lawn. Originally the dwellers in the white house had owned the ground next door and next door to that and next door to that, but this had been so long ago that even Jim’s father, scarcely remembered it. He had, in fact, thought it a matter of so little moment that when he was dying from a pistol wound got in a brawl he neglected even to tell little Jim, who was five years old and miserably frightened. The white house became a boarding-house run by a tight-lipped lady from Macon, whom Jim called Aunt Mamie and detested with all his soul.

He became fifteen, went to high school, wore his hair in black snarls, and was afraid of girls. He hated his home where four women and one old man prolonged an interminable chatter from summer to summer about what lots the Powell place had originally included and what sorts of flowers would be out next. Sometimes the parents of little girls in town, remembering Jim’s mother and fancying a resemblance in the dark eyes and hair, invited him to parties, but parties made him shy and he much preferred sitting on a disconnected axle in Tilly’s Garage, rolling the bones or exploring his mouth endlessly with a long straw. For pocket money, he picked up odd jobs, and it was due to this that he stopped going to parties. At his third party little Marjorie Haight had whispered indiscreetly and within hearing distance that he was a boy who brought the groceries sometimes. So instead of the two-step and polka, Jim had learned to throw, any number he desired on the dice and had listened to spicy tales of all the shootings that had occurred in the surrounding country during the past fifty years.

When the war was over he came home, He was twenty-one, has trousers were too short and too tight. His buttoned shoes were long and narrow. His tie was an alarming conspiracy of purple and pink marvellously scrolled, and over it were two blue eyes faded like a piece of very good old cloth, long exposed to the sun.

In the twilight of one April evening when a soft gray had drifted down along the cottonfields and over the sultry town, he was a vague figure leaning against a board fence, whistling and gazing at the moon’s rim above the lights of Jackson Street. His mind was working persistently on a problem that had held his attention for an hour. The Jelly-bean had been invited to a party.

Back in the days when all the boys had detested all the girls, Clark Darrow and Jim had sat side by side in school. But, while Jim’s social aspirations had died in the oily air of the garage, Clark had alternately fallen in and out of love, gone to college, taken to drink, given it up, and, in short, become one of the best beaux of the town. Nevertheless Clark and Jim had retained a friendship that, though casual, was perfectly definite.