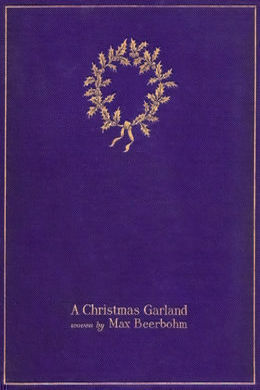 Seventeen parodies with a Christmas theme of some of the most renowned authors of the period - including Kipling, Henry James, Thomas Hardy, H.G. Wells and Conrad - written by Max Beerbohm, whose reputation as a humourist and writer remains high. It is regarded as one of the finest collection of parodies in the English language.

It was with the sense of a, for him, very memorable something that he peered now into the immediate future, and tried, not without compunction, to take that period up where he had, prospectively, left it. But just where the deuce had he left it? The consciousness of dubiety was, for our friend, not, this morning, quite yet clean–cut enough to outline the figures on what she had called his “horizon,”between which and himself the twilight was indeed of a quality somewhat intimidating. He had run up, in the course of time, against a good number of “teasers;” and the function of teasing them back—of, as it were, giving them, every now and then, “what for”—was in him so much a habit that he would have been at a loss had there been, on the face of it, nothing to lose. Oh, he always had offered rewards, of course—had ever so liberally pasted the windows of his soul with staring appeals, minute descriptions, promises that knew no bounds. But the actual recovery of the article—the business of drawing and crossing the cheque, blotched though this were with tears of joy—had blankly appeared to him rather in the light of a sacrilege, casting, he sometimes felt, a palpable chill on the fervour of the next quest. It was just this fervour that was threatened as, raising himself on his elbow, he stared at the foot of his bed. That his eyes refused to rest there for more than the fraction of an instant, may be taken—was, even then, taken by Keith Tantalus—as a hint of his recollection that after all the phenomenon wasn’t to be singular. Thus the exact repetition, at the foot of Eva’s bed, of the shape pendulous at the foot of his was hardly enough to account for the fixity with which he envisaged it, and for which he was to find, some years later, a motive in the (as it turned out) hardly generous fear that Eva had already made the great investigation “on her own.” Her very regular breathing presently reassured him that, if she had peeped into “her”stocking, she must have done so in sleep. Whether he should wake her now, or wait for their nurse to wake them both in due course, was a problem presently solved by a new development. It was plain that his sister was now watching him between her eyelashes. He had half expected that. She really was—he had often told her that she really was—magnificent; and her magnificence was never more obvious than in the pause that elapsed before she all of a sudden remarked “They so very indubitably are, you know!”

It occurred to him as befitting Eva’s remoteness, which was a part of Eva’s magnificence, that her voice emerged somewhat muffled by the bedclothes. She was ever, indeed, the most telephonic of her sex. In talking to Eva you always had, as it were, your lips to the receiver. If you didn’t try to meet her fine eyes, it was that you simply couldn’t hope to: there were too many dark, too many buzzing and bewildering and all frankly not negotiable leagues in between. Snatches of other voices seemed often to intertrude themselves in the parley; and your loyal effort not to overhear these was complicated by your fear of missing what Eva might be twittering. “Oh, you certainly haven’t, my dear, the trick of propinquity!” was a thrust she had once parried by saying that, in that case, he hadn’t—to which his unspoken rejoinder that she had caught her tone from the peevish young women at the Central seemed to him (if not perhaps in the last, certainly in the last but one, analysis) to lack finality. With Eva, he had found, it was always safest to “ring off.” It was with a certain sense of his rashness in the matter, therefore, that he now, with an air of feverishly “holding the line,” said “Oh, as to that!”

Had she, he presently asked himself, “rung off”? It was characteristic of our friend—was indeed “him all over”—that his fear of what she was going to say was as nothing to his fear of what she might be going to leave unsaid. He had, in his converse with her, been never so conscious as now of the intervening leagues; they had never so insistently beaten the drum of his ear; and he caught himself in the act of awfully computing, with a certain statistical passion, the distance between Rome and Boston. He has never been able to decide which of these points he was psychically the nearer to at the moment when Eva, replying “Well, one does, anyhow, leave a margin for the pretext, you know!” made him, for the first time in his life, wonder whether she were not more magnificent than even he had ever given her credit for being. Perhaps it was to test this theory, or perhaps merely to gain time, that he now raised himself to his knees, and, leaning with outstretched arm towards the foot of his bed, made as though to touch the stocking which Santa Claus had, overnight, left dangling there.