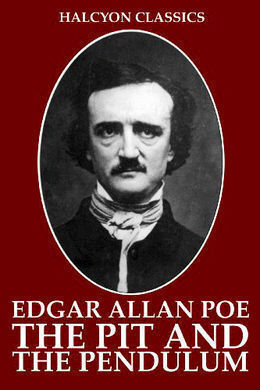 The Pit and The Pendulum

Pit and The Pendulum is about the torments endured by a prisoner of the Spanish Inquisition. The story is especially effective at inspiring fear in the reader because of its heavy focus on the senses, such as sound, emphasizing its reality, unlike many of Poe’s stories which are aided by the supernatural.

I was sick–sick unto death with that long agony; and when they at length unbound me, and I was permitted to sit, I felt that my senses were leaving me. The sentence–the dread sentence of death–was the last of distinct accentuation which reached my ears. After that, the sound of the inquisitorial voices seemed merged in one dreamy indeterminate hum. It conveyed to my soul the idea of revolution–perhaps from its association in fancy with the burr of a mill wheel. This only for a brief period; for presently I heard no more. Yet, for a while, I saw; but with how terrible an exaggeration! I saw the lips of the black-robed judges. They appeared to me white–whiter than the sheet upon which I trace these words–and thin even to grotesqueness; thin with the intensity of their expression of firmness–of immoveable resolution–of stern contempt of human torture. I saw that the decrees of what to me was Fate, were still issuing from those lips. I saw them writhe with a deadly locution. I saw them fashion the syllables of my name; and I shuddered because no sound succeeded. I saw, too, for a few moments of delirious horror, the soft and nearly imperceptible waving of the sable draperies which enwrapped the walls of the apartment. And then my vision fell upon the seven tall candles upon the table. At first they wore the aspect of charity, and seemed white and slender angels who would save me; but then, all at once, there came a most deadly nausea over my spirit, and I felt every fibre in my frame thrill as if I had touched the wire of a galvanic battery, while the angel forms became meaningless spectres, with heads of flame, and I saw that from them there would be no help. And then there stole into my fancy, like a rich musical note, the thought of what sweet rest there must be in the grave. The thought came gently and stealthily, and it seemed long before it attained full appreciation; but just as my spirit came at length properly to feel and entertain it, the figures of the judges vanished, as if magically, from before me; the tall candles sank into nothingness; their flames went out utterly; the blackness of darkness supervened; all sensations appeared swallowed up in a mad rushing descent as of the soul into Hades. Then silence, and stillness, night were the universe.

I had swooned; but still will not say that all of consciousness was lost. What of it there remained I will not attempt to define, or even to describe; yet all was not lost. In the deepest slumber–no! In delirium–no! In a swoon–no! In death–no! even in the grave all is not lost. Else there is no immortality for man. Arousing from the most profound of slumbers, we break the gossamer web of some dream. Yet in a second afterward, (so frail may that web have been) we remember not that we have dreamed. In the return to life from the swoon there are two stages; first, that of the sense of mental or spiritual; secondly, that of the sense of physical, existence. It seems probable that if, upon reaching the second stage, we could recall the impressions of the first, we should find these impressions eloquent in memories of the gulf beyond. And that gulf is–what? How at least shall we distinguish its shadows from those of the tomb? But if the impressions of what I have termed the first stage, are not, at will, recalled, yet, after long interval, do they not come unbidden, while we marvel whence they come? He who has never swooned, is not he who finds strange palaces and wildly familiar faces in coals that glow; is not he who beholds floating in mid-air the sad visions that the many may not view; is not he who ponders over the perfume of some novel flower–is not he whose brain grows bewildered with the meaning of some musical cadence which has never before arrested his attention.

Amid frequent and thoughtful endeavors to remember; amid earnest struggles to regather some token of the state of seeming nothingness into which my soul had lapsed, there have been moments when I have dreamed of success; there have been brief, very brief periods when I have conjured up remembrances which the lucid reason of a later epoch assures me could have had reference only to that condition of seeming unconsciousness. These shadows of memory tell, indistinctly, of tall figures that lifted and bore me in silence down–down–still down–till a hideous dizziness oppressed me at the mere idea of the interminableness of the descent. They tell also of a vague horror at my heart, on account of that heart’s unnatural stillness. Then comes a sense of sudden motionlessness throughout all things; as if those who bore me (a ghastly train!) had outrun, in their descent, the limits of the limitless, and paused from the wearisomeness of their toil. After this I call to mind flatness and dampness; and then all is madness–the madness of a memory which busies itself among forbidden things.