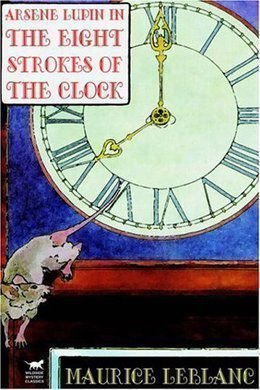 The Eight Strokes of the Clock

The eight strokes of the clock is a collection of stories of Maurice Leblanc featuring the adventures of Arsene Lupin, all of which have a common thread. To distract and seduce a young woman, Hortense Daniel, Arsene Lupin, with the identity of Prince Serge Renin, will focus on solving eight puzzles. Working with, for or against the police, Lupin fails to fly in the news. The use of the figure 8 is pushed to its climax in the story The Lady and the Axe. Contents: On The Top Of The Tower; The Water Bottle; The Case Of Jean Louis; The Tell-tale Film; Thérèse And Germaine; The Lady With The Hatchet; Footprints In The Snow; At The Sign Of Mercury.

“I am here,” replied a voice from the shrubbery at the front of the house.

Leaning forward, she saw a rather fat man looking up at her out of a gross red face with its cheeks and chin set in unpleasantly fair whiskers.

“Well, I had a great argument with my uncle and aunt last night. They absolutely refuse to sign the document of which my lawyer sent them the draft, or to restore the dowry squandered by my husband.”

“But your uncle is responsible by the terms of the marriage-settlement.”

“No matter. He refuses.”

“Well, what do you propose to do?”

“Are you still determined to run away with me?” she asked, with a laugh.

“More so than ever.”

“Your intentions are strictly honourable, remember!”

“Just as you please. You know that I am madly in love with you.”

“Unfortunately I am not madly in love with you!”

“Then what made you choose me?”

“Chance. I was bored. I was growing tired of my humdrum existence. So I’m ready to run risks…. Here’s my luggage: catch!”

She let down from the window a couple of large leather kit-bags. Rossigny caught them in his arms.

“The die is cast,” she whispered. “Go and wait for me with your car at the If cross-roads. I shall come on horseback.”

“He will go home by himself.”

“Who is this Prince Rénine, who’s been here the last three days and whom nobody seems to know?”

“I don’t know much about him. My uncle met him at a friend’s shoot and asked him here to stay.”

“You seem to have made a great impression on him. You went for a long ride with him yesterday. He’s a man I don’t care for.”

“In two hours I shall have left the house in your company. The scandal will cool him off…. Well, we’ve talked long enough. We have no time to lose.”

For a few minutes she stood watching the fat man bending under the weight of her traps as he moved away in the shelter of an empty avenue. Then she closed the window.

Outside, in the park, the huntsmen’s horns were sounding the reveille. The hounds burst into frantic baying. It was the opening day of the hunt that morning at the Château de la Marèze, where, every year, in the first week in September, the Comte d’Aigleroche, a mighty hunter before the Lord, and his countess were accustomed to invite a few personal friends and the neighbouring landowners.

Hortense slowly finished dressing, put on a riding-habit, which revealed the lines of her supple figure, and a wide-brimmed felt hat, which encircled her lovely face and auburn hair, and sat down to her writing-desk, at which she wrote to her uncle, M. d’Aigleroche, a farewell letter to be delivered to him that evening. It was a difficult letter to word; and, after beginning it several times, she ended by giving up the idea.

“I will write to him later,” she said to herself, “when his anger has cooled down.”

And she went downstairs to the dining-room.

Enormous logs were blazing in the hearth of the lofty room. The walls were hung with trophies of rifles and shotguns. The guests were flocking in from every side, shaking hands with the Comte d’Aigleroche, one of those typical country squires, heavily and powerfully built, who lives only for hunting and shooting. He was standing before the fire, with a large glass of old brandy in his hand, drinking the health of each new arrival.

“What, uncle! You who are usually so sober!”

“Pooh!” he said. “A man may surely indulge himself a little once a year!…”

“Aunt will give you a scolding!”

“Your aunt has one of her sick headaches and is not coming down. Besides,” he added, gruffly, “it is not her business … and still less is it yours, my dear child.”

Prince Rénine came up to Hortense. He was a young man, very smartly dressed, with a narrow and rather pale face, whose eyes held by turns the gentlest and the harshest, the most friendly and the most satirical expression. He bowed to her, kissed her hand and said:

“May I remind you of your kind promise, dear madame?”

“Yes, we agreed that we should repeat our delightful excursion of yesterday and try to go over that old boarded-up place the look of which made us so curious. It seems to be known as the Domaine de Halingre.”

She answered a little curtly:

“I’m extremely sorry, monsieur, but it would be rather far and I’m feeling a little done up. I shall go for a canter in the park and come indoors again.”

There was a pause. Then Serge Rénine said, smiling, with his eyes fixed on hers and in a voice which she alone could hear:

“I am sure that you’ll keep your promise and that you’ll let me come with you. It would be better.”