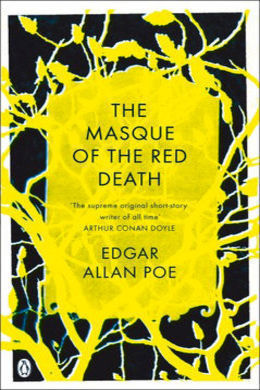 The Masque of the Red Death

A thousand of the favored joined their decadent prince behind high walls and welded gates. They engaged in bizarre celebrations while the Red Death raged outside–until one cryptic figure showed them the true horror in The Masque of the Red Death.

The “Red Death” had long devastated the country. No pestilence had ever been so fatal, or so hideous. Blood was its Avatar and its seal–the redness and the horror of blood. There were sharp pains, and sudden dizziness, and then profuse bleeding at the pores, with dissolution. The scarlet stains upon the body and especially upon the face of the victim, were the pest ban which shut him out from the aid and from the sympathy of his fellow-men. And the whole seizure, progress and termination of the disease, were the incidents of half an hour.

But the Prince Prospero was happy and dauntless and sagacious. When his dominions were half depopulated, he summoned to his presence a thousand hale and light-hearted friends from among the knights and dames of his court, and with these retired to the deep seclusion of one of his castellated abbeys. This was an extensive and magnificent structure, the creation of the prince’s own eccentric yet august taste. A strong and lofty wall girdled it in. This wall had gates of iron. The courtiers, having entered, brought furnaces and massy hammers and welded the bolts. They resolved to leave means neither of ingress nor egress to the sudden impulses of despair or of frenzy from within. The abbey was amply provisioned. With such precautions the courtiers might bid defiance to contagion. The external world could take care of itself. In the meantime it was folly to grieve, or to think. The prince had provided all the appliances of pleasure. There were buffoons, there were improvisatori, there were ballet-dancers, there were musicians, there was Beauty, there was wine. All these and security were within. Without was the “Red Death”.

It was towards the close of the fifth or sixth month of his seclusion, and while the pestilence raged most furiously abroad, that the Prince Prospero entertained his thousand friends at a masked ball of the most unusual magnificence.

It was a voluptuous scene, that masquerade. But first let me tell of the rooms in which it was held. These were seven–an imperial suite. In many palaces, however, such suites form a long and straight vista, while the folding doors slide back nearly to the walls on either hand, so that the view of the whole extent is scarcely impeded. Here the case was very different, as might have been expected from the duke’s love of the bizarre. The apartments were so irregularly disposed that the vision embraced but little more than one at a time. There was a sharp turn at every twenty or thirty yards, and at each turn a novel effect. To the right and left, in the middle of each wall, a tall and narrow Gothic window looked out upon a closed corridor which pursued the windings of the suite. These windows were of stained glass whose colour varied in accordance with the prevailing hue of the decorations of the chamber into which it opened. That at the eastern extremity was hung, for example in blue–and vividly blue were its windows. The second chamber was purple in its ornaments and tapestries, and here the panes were purple. The third was green throughout, and so were the casements. The fourth was furnished and lighted with orange–the fifth with white–the sixth with violet. The seventh apartment was closely shrouded in black velvet tapestries that hung all over the ceiling and down the walls, falling in heavy folds upon a carpet of the same material and hue. But in this chamber only, the colour of the windows failed to correspond with the decorations. The panes here were scarlet–a deep blood colour. Now in no one of the seven apartments was there any lamp or candelabrum, amid the profusion of golden ornaments that lay scattered to and fro or depended from the roof. There was no light of any kind emanating from lamp or candle within the suite of chambers. But in the corridors that followed the suite, there stood, opposite to each window, a heavy tripod, bearing a brazier of fire, that projected its rays through the tinted glass and so glaringly illumined the room. And thus were produced a multitude of gaudy and fantastic appearances. But in the western or black chamber the effect of the fire-light that streamed upon the dark hangings through the blood-tinted panes, was ghastly in the extreme, and produced so wild a look upon the countenances of those who entered, that there were few of the company bold enough to set foot within its precincts at all.